On January 20, 1980, India won their first-ever series against Pakistan with a resounding victory at Chepauk. Arunabha Sengupta recalls the match in which Sunil Gavaskar and Kapil Dev clicked together to seal an emphatic win.

One was considered the best opening batsman of his generation. The other was hailed as one of the leading all-rounders of his era — a period which was cluttered with quite a few legends in that department.

The country was blessed with their combined talents turning out together in as many as 87 Test matches. Yet, the rest of the team often let them down. The batting was often brittle and rarely was there firepower at the other end to blast an opposition out twice. Besides, the two seldom fired together in a winning cause. Hence, only 12 of those 87 Tests resulted in wins, 19 in losses and as many as 55 in draws in those drab late 1970s and early 1980s.

Was it because of the less than ideal inter-personal relationship between the two? Tales of their differences are legendary. We can only speculate.

Yet, there was this unique Test match in their combined history — when all their skills erupted in synchronised splendour, leaving the immensely strong Pakistan line up dazed and helpless. It gave India the Test at Chepauk, and along with it the first rubber against Pakistan. It remained the only Indian victory that saw a Sunil Gavaskar century and a Kapil Dev five-wicket haul simultaneously. And then there was the little matter of Kapil Dev going berserk with the bat.

Asif Iqbal won the toss and Pakistan batted on a decent Chepauk track, perfect for batting other than balls bouncing a tad higher at one end. Halfway through the first day, the advantage conceded by the unlucky flip of the coin was neutralised by Kapil Dev. Used in intelligent bursts by Gavaskar, he generated impressive pace, inducing an early edge from Mudassar Nazar. An hour and a half into the first morning, he slanted one across Sadiq Mohammed to get him caught behind. And 10 minutes later, he shifted the balance towards India by getting the formidable Zaheer Abbas for a blob with an outswinger.

Majid Khan and Javed Miandad now eased the pressure, batting with ease and turning on the heat with some breathtakingly stolen singles and twos. However, at 151, Majid found a call a bit too sharp and headed back, run-out for 55.

The young Miandad had displayed phenomenal maturity, punctuating the electric running with some crisp boundaries. Now, Kapil produced another out-swinger that had him well taken in the slips. With four wickets, the Haryana hurricane had scooped out the cream of the batting. It was a large hearted show negating the risks that loomed large due to with a gamble of selection. India had gone into the match with just four bowlers, leaving out Shivlal Yadav from the eleven. There was just one specialist spinner in Dilip Doshi. The three pace attack included the rookie Roger Binny — backed up by the contingency plan of using Karsan Ghavri as both a medium- pacer and a spinner.

Asif Iqbal, like most of the Pakistan batsmen, looked good early on before Ghavri induced an edge with a delivery that left him. With Wasim Raja tamely offering a catch off Doshi, Pakistan ended at 254 for 7.

The next day, the tail did not wag for too long — the end hastened with another runout, this time Imran Khan falling short of his ground. The visitors, on a perfect wicket, had managed just 272. Kapil Dev had been taken for runs, but the wickets had more than justified the profligacy. Four for 90 off 19 overs had been instrumental in checking the progress of the best batsmen of the line-up. 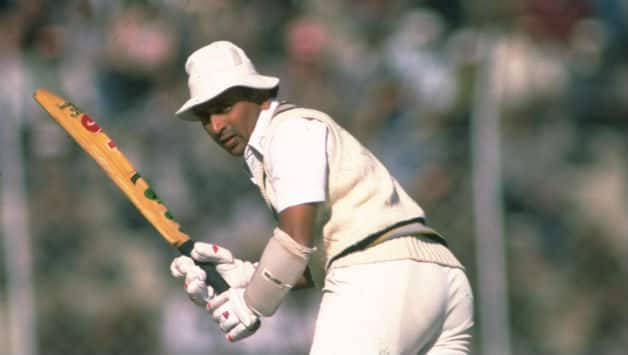 Up 1-0 in the series after the win in the second Test at Bombay, Gavaskar realised he had the chance of sealing the series. The resulting decision was to bat Pakistan out of the match. The strategy, hatched in the hotel room of the captain, was to occupy the crease at all cost.

The Pakistan bowling was accurate, and often incisive, but the Indians did not. Chetan Chauhan batted well over an hour for five. Dilip Vengsarkar, whose natural aggression was surprisingly curbed by n obdurate layer of defence in the series, batted 84 minutes for 17. Gundappa Viswanath also played well within himself, grafting out. Only debutant Sandeep Patil showed glimpses of aggression before falling off an edge in the dying minutes of the second day. All along, Sunil Gavaskar batted like a rock at the other end — without a chink in his technique for the Pakistanis to penetrate, determined and impregnable. At the end of the day, India stood at 161 for 4. Gavaskar was unbeaten on 92.

The next day, the strategy continued unaltered. Gavaskar completed his century, but had no intention to look for runs. At the other end, Yashpal Sharma, dour and gritty, proved the perfect partner. Imran Khan, Sikander Bakht and Iqbal Qasim could not make any inroads. The scoring remained slow, steady and steadfast. It was well into the fourth hour of the day when Qasim’s spin found its way past through Yashpal’s bat to bowl him for 45 made in 3 hours 21 minutes. The score read 265 for 5.

Syed Kirmani, sent in ahead of Kapil to continue the story of attrition, spent half an hour at the wicket, but could score just 2. Imran bowled him at 279. Gavaskar was going on and on, but with 6 wickets down, there was a chance of keeping the lead within reasonable limits.

However, with tea approaching, Kapil walked out to bat, and the complexion of the match underwent a complete change.

The attack, by now dead tired in the heat and in the face of dreary resistance of the passive Gavaskar, was now hammered to all corners of the ground. Pacers and spinners were cracked with strokes as scintillating as indigenous. The balls pitched up were driven or lofted with an uncanny eye and incredible ferocity. Anything short was carted and pulled, in a fashion soon to bear the Kapil Dev trademark.

At the other end, Gavaskar was happy to look on and pursue his agenda of keeping the bowlers at bay. The pair added 60 before Imran Khan managed to induce Gavaskar to steer one into the hands of Iqbal Qasim. The skipper walked back to a standing ovation. His had occupied the crease for just 7 minutes short of 10 hours, scoring 166. By this time, the advantage was well and truly with India.

Roger Binny came in with aggressive intent, and by the end of the day, quick and valuable runs had been plundered. India finished with a lead of over hundred, with three wickets still in hand.

Invigorated further by the day of rest that followed, Kapil and Binny kept hammering the bowlers mercilessly on the next morning

Imran bounced early in the day, and Binny, playing just his second Test, nonchalantly hooked the great fast bowler for six. At the other end, Kapil Dev creamed the frustrated attack with élan and looked well in sight of his century when Imran trapped him leg before. His 84 had come in just 98 balls with 13 fours and a six. With Binny he had added 83 runs in just over an hour.

The Indian innings ended at 430, giving them a lead of 158. Binny remained unbeaten on a 45-ball 43, a cameo which drilled the last nail in the Pakistan coffin.

In the 38 minutes that remained before lunch, Mudassar and Sadiq threw their bats at Kapil in strokes that redefined indiscretion, and Pakistan went into the break at 24 for 2. By their scorecard and manner, they had already surrendered to fate. Kapil Dev’s second innings feat was special — 7 for 57, at the time the best bowling effort of his career  © Getty Images

Things did not improve after the break. At 33, Zaheer glanced Kapil into the leg-trap. Three runs later, Ghavri followed the plan to perfection as he baited Majid with bouncers After two well executed strokes, the batsman obligingly hooked the third one down the throat of long-leg.

Kapil now switched to round the wicket and Asif Iqbal could not master the angle as he edged a square cut. It was 58 for five. Miandad did look more resolute, as Wasim Raja flung his bat around in a tale of desperation. For a while the strokes came off, and the score raced along. After some attractive but purposeless hitting that brought him eleven boundaries in a whirlwind 57, Raja fell to Doshi. All the while, Miandad had built his innings for over three hours. He had passed his half-century mark when the bespectacled spinner got him to edge one to the ’keeper. Pakistan ended the fourth day at 178 for 7, just 20 runs ahead.

The tail showed a lot more pluck and determination on the morning of the final day. Wicketkeeper Wasim Bari was caught plumb by Kapil after a fighting innings. Qasim joined Imran and the pair defied the Indian bowlers for almost an hour. However, Kapil got Imran to sky one to the outfield to give him 10 for the match and soon bowled Bakht to end the innings. His second innings feat was special — 7 for 57, at the time the best bowling effort of his career. It gave him 11 for 147 in the match to go with the swashbuckling 84.

Just 76 were required to win, and India got there in quick time. Chauhan, normally the slowest of grafters, blasted 8 boundaries in an enterprising 46 as India triumphed by 10 wickets.

It had been an emphatic performance, India’s first series win against Pakistan. A sweet revenge for the humiliation suffered in Pakistan a couple of seasons earlier.The combination of Gavaskar the opening batsman and Kapil Dev the champion all-rounder had clicked resoundingly as a winning pair. It was India’s fourth victory of the season and it promised much more.

In the end, it is a pity that the combined brilliance seldom rang through in the same symphony after that.

Not always the happy tale: Gavaskar and Kapil in victories

(The table shows the performances of Gavaskar and Kapil Dev in the 12 victories in 87 Test matches they played together. They were also involved in 19 losses, 55 draws and 1 tie. The Chepauk match against Pakistan was the only time when both clicked together with all their available skills.)