With another season of Indian Premier League coming to an end, it's time to review the top five batting performances.

With another season of Indian Premier League coming to an end, it’s time to review the top five performances in various departments.

Here we look at the major batting performances. There were several memorable innings throughout the league – Andre Russell was hitting sixes for fun as no target seemed out of his reach and then there were some blazing centuries six of them in total with two being scored in the same match by one team.

Royal Challengers Bangalore ran into Andre Russell after suffering four consecutive defeats. The strugglers had done well to post a total in excess off 200. With Kolkata Knight Riders under the pump needing 67 runs off 26 balls, RCB were clearly in the driver’s seat. Little did they know what Russell had in mind. In eight deliveries, he left everyone gobsmacked. Having walked into bat with his team in a difficult spot, Russell blasted unbeaten 48 off 13 deliveries with one four and seven sixes. KKR chased down 206 with five deliveries to spare. RCB were kept winless as they suffered a fifth straight defeat.

In his maiden IPL stint, England’s Jonny Bairstow left quite an impression. He formed a deadly opening partnership with David Warner for Sunrisers Hyderabad. The duo went berserk against RCB in the early days of the season, with each hitting century in a record-breaking partnership. Bairstow let his intention know, hitting a four off the second delivery faced. SRH made 59 in the Powerplay and two quiet overs later, Bairstow shifted gears with a two fours and six off successive deliveries to hit a maiden fifty. Having got the start, the wicketkeeper-batsman made it big, completing his century off 52 deliveries. He was out after hitting 12 fours and seven sixes contribution 114 runs in the opening partnership that was worth 185 runs.

Russell had done this thing. Another blitz saw him ransack an unbeaten 80 off 40 deliveries as KKR posted another 200-plus total, this time against Mumbai Indians. The host then tightened the screws removing MI’s top-four inside nine overs for just 58 runs. In walked Hardik Pandya. And he began blasting sixes. In just 17 deliveries, he smashed the fastest fifty of the season. Single-handedly, he gave KKR a mighty scare with six fours and nine sixes in a stunning assault, nearly pulling off a sensational win. He struck 91 off just 34 deliveries and fell in the 18th over, bringing KKR a huge sigh of relief. Russell was among those who ran in to pat his back for playing one of the most memorable innings in IPL history.

MI were 65/3 at the halfway stage in chase of 198 against Kings XI Punjab when Kieron Pollard, captaining the side in the absence of Rohit Sharma, promoted himself up. KXIP had tied them down with captain R Ashwin delivering two overs for just seven runs. The requirement was 133 off 60 deliveries. Pollard was quiet for five deliveries as he got the measure of the pitch before taking on Ashwin with a six over long-on to end his third over. Ashwin returned to bowl the 14th over but by then, MI s stand-in captain was in full flow belting the offspinner for two consecutive sixes followed a couple off three successive deliveries to move to 40 off 15. Sam Curran offered freebies and Pollard accepted them, handing him two sixes in return in the 17th over. Ashwin persisted with Curran for the penultimate over and Pollard smoked two more sixes and a four in it leaving his team needing 15 from the final over. He all but sealed the deal with a one-handed six off a no-ball followed by a four off the free-hit that followed. He was caught off the second legitimate delivery but Alzarri Joseph and Rahul Chahar ensured his knock wasn’t in vain.

Think for a moment and let it sink in that MS Dhoni s 75 not out is his second-highest score in the IPL s 12-year existence. Cometh the hour, cometh the man and all that. Chennai Super Kings were in a spot of bother after losing their three wickets inside five overs. Captain cool walked in and within no time, he watched the ball hit the stumps but the bails remain intact. He huffed, he puffed, he blocked and he was beaten. His first 17 deliveries faced comprised one and twos. He lost Raina in the 14th over, didn t hit a six until his 38th delivery faced. He finished with four in all, his innings of 75* needing 46 balls. In CSK s final over, Dhoni hit three sixes off Jaydev Unadkat in an over that cost 28 runs. Of the 60 runs CSK looted in the last three overs of their innings, 35 came to Dhoni as they posted 175/5 which turned out to be enough. 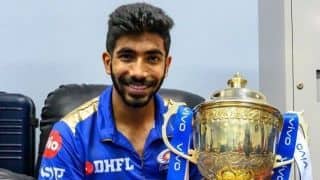