Netherlands Women did not hit a single boundary in the entire match.

Over years, cricket has had her share of stonewalling, but few have matched the one put up by Netherlands Women at Rotterdam in 2007. Up against a strong South African side, the Dutch women decided to set up tent at the crease, batting for the better part of two days without any intent of scoring. The South African bowlers, relentless and perseverant, kept making dents into the batting line-up, eventually winning the match after a long, hard struggle that ended on July 31, 2007. Abhishek Mukherjee looks back at probably the greatest defensive act in the history of the sport.

What do you do if you are a part of history, playing for your country in her first Test? It was certainly a big moment for the eleven ladies turning out for Netherlands Women — the tenth team to play Women’s Tests — and despite being up against a strong South African outfit, they refused to give up.

To be fair, though the South Africans were a stronger and more efficient side, they were far from being an outstanding team. Though they had played their first four Tests back in 1960-61 (and played three more in 1972-73), their total tally read 10 Tests, of which they had lost 4 and drawn 6. They had not played a Test for four years, and had seven debutants in their side.

The Proteas were keen on winning. The Dutch, too, were in no mood to concede a historic match. A few eyebrows were raised when Helmien Rambaldo put the tourists in, and the unrelated Magdalena ‘Daleen’ and Claire Terblanche added 72 for the opening stand in 70 minutes.

Claire fell soon, but Daleen was supported by the top-order. Daleen’s first four partners all reached double-figures, and took the score to 157 for 3 before the Dutch hit back. South Africa women finished Day One on 159 for 5 amidst poor light, with Daleen going strong with 60.

They lost two quick wickets on Day Three (it was a four-day match), but Daleen helped them recover from 166 for 7. She was ninth out for a 203-ball 72 (with only two boundaries). The score read 200 for 9. READ: ICC Women’s World T20 2013 qualifier: Three teams can advance to main tournament

No. 10 batter Ashlyn Kilowan threw her bat around. Marcia Letsoalo. Ashlyn raced to a 39-ball 28 not out as Marcia hung around; South Africa Women were bowled out for 232. Jolet Hartenhof took 4 for 62 with her seam-ups, while Caroline de Fouw’s off-breaks fetched her 3 for 27.

The innings included a mere 5 boundaries. As the Test proceeded, that number seemed outrageously high.

Despite a full day’s play being lost, South Africa Women should have fancied a win for several reasons. For example, it was unlikely that the Dutch would take a lead big enough to push for a win. The possibility of them trying to save the match was more — especially since they were playing their first Test.

Things looked bright when Alicia Smith trapped Leonie Hoitink leg-before with the second ball of the innings. The second wicket fell on 3, when Helmien herself was clean bowled by Shabnim Ismail. She had scored 1.

However, there was a catch: Shabnim was the second-change bowler; Helmien had scored 1, as mentioned, but had faced 26 balls and had batted half an hour. The intention was clear. They were set out to stonewall their way to glory.

Maartje Köster walked out to join wicketkeeper Violet Wattenberg. The crawl had been looming on the horizon till then; Violet and Maartje gave it official status. They batted on and on, like there was no tomorrow, or day after, or week after, or there was a concept called time.

The pair added 63 in 3 hours before Maartje fell for a 3-hour 29. Claire Terblanche struck two balls later, sending Marijn Nijman back, but the teenaged Danielle Marloes Braat set up tent. They ambled to 73 for 4 after 89 overs.

The run rate was not even worth a mention. Batting through the entire phase, Violet finished the day unbeaten on 32. Little did the South Africans realise that she had just begun.

It was the same story all over, next day. Marloes fell a mere 3 runs into the morning, but had batted for an hour. She had scored a mere 4, but had managed to see off 71 balls. Soon afterwards, Caroline became the third in the line-up to fall for a two-ball duck. The score read 76 for 6.

And 6 runs later, Annemarie Tanke was run out for a duck — one of the most resilient ducks in history — for it had lasted 51 deliveries. Then the Dutch scored at a breakneck pace as Violet and Mandy Kornet added 18 in a mere half an hour, running hard as if there was no tomorrow. READ: ICC Women’s World Cup 2013 preview: Exciting contest on cards as South Africa face West

Then, after 380 minutes and 378 balls of remorseless concentration and reluctance to hit the ball hard, after an innings that would have put Geoff Boycott and Chris Tavare and Bruce Edgar and Ravi Shastri to shame, Violet succumbed to the off-breaks of Sunette Loubser — for 49.

Soon afterwards, Sunette trapped Jolet leg-before for duck (fifth of the innings) as the hosts were bowled out for 108 — in 123.3 overs. Sunette had toiled hard for her 40.3-18-37-5, which were, somewhat bizarrely, one of the most expensive figures for her side.

But all that would have sounded normal, but for the fact that Netherlands Women did not hit a single boundary in a 741-ball innings.

A 124-run merited a hard-hitter at the top, and Susan Benade walked out with Carlene. The pair added 60 in 39 minutes, and after Marloes removed Carlene, captain Cri-Zelda Brits walked out.

Susan reached her fifty in quick time, and Cri-Zelda declared immediately she was stumped off Carlene. Susan’s 51 came off 64 balls, and included an unbelievable 4 boundaries. The Dutch were set 210. There had already been 59 overs of cricket that day, but even if one allowed 20 minutes for the two innings breaks, the early start and the long Dutch summer days meant that the hosts would have to grit it out, again.

Both Leonie and Violet fell early this time, but there was the small matter of Helmien and Maartje to deal with. Both women fought long and hard, Helmien for 49 balls (for a rapid 17) and Maartje 69 (for a sedate 9), but once they fell South Africa Women made quick inroads.

From 39 for 3, unfortunately, Netherlands Women were bowled out for a mere 50. The fact that they scored at a whopping 1.25 an over did not help their cause. Perhaps a bit more caution was the need of the hour.

Between them, the last seven batswomen managed 12 from 113 balls. Had they tried to bat at a slower pace, they might have saved the match — but common sense did not prevail. READ: ICC Women’s World Cup 2013: Sune Luus to replace Dinesha Devnarain in South Africa

Despite being thrashed around, Sunette was once again the most successful bowler with a somewhat expensive haul of 14-4-22-3. Alicia, Shabnim, and Susan, took two wickets apiece, and had figures of 15-8-10-6 between them.

In the second innings, too, not a single Dutch stroke reached the rope, which meant they faced 981 balls without a boundary.

Netherlands Women are yet to play another Test. One wonders why. 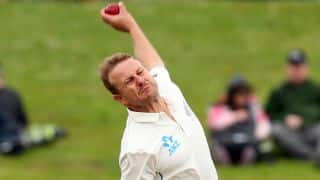 New Zealand bowler debuts for Lancashire with a six-wicket haul 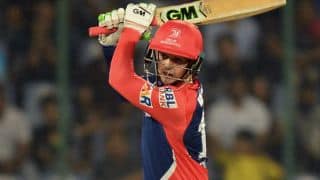 IPL 2016: Quinton de Kock's century for Delhi Daredevils only proves that he is the best young batsman in the world