There is a usual orthodox touch to Virat Kohli's batting. On Sunday, on this occasion, after many years, we realised how a proper but unthinkable cricket shot can unite the cricket with an emotion centring around shock and delight.

“I could not believe some of the shots he played. He told me it was instinctive, but such was his talent,” Virat Kohli spoke about the diminutive Kedar Jadhav. Sunday night was about Jadhav. His 76-ball 120 hogged the limelight. For Kohli, it was just another day in the office. He walked out when India were in trouble. He slammed a customary hundred 122 from 105 balls. Nothing extraordinary. Another Kohli century and another win for India and ‘yawwwn’. The captain was happy with Jadhav taking the accolades.

He humbly accepted the “unbelievable” Jadhav shots. Yes, some of the strokes that Jadhav played with his insane bat speed wowed the fraternity. But the jaw-dropping was from Kohli’s wood. He has ripped out the ‘excitement’ bit from run-chases in the past. He makes them look bland.

ODIs cannot survive without excitement, so maybe he has decided to do that with his strokeplay.

There is a usual orthodox touch to Kohli’s batting. On Sunday, on this occasion, after many years, we realised how a proper but unthinkable cricket shot can unite the cricket world with an emotion centring around shock and delight.

This was not one of those incredible reverse-sweep sixes from AB de Villiers or the brute rocket force from Chris Gayle’s bat or even a MS Dhoni helicopter. Or the similar to the unbelievable off-balanced, on the floor off-side six by Najibullah Zadran. Something unseen.

If you watch nothing else tonight…you MUST watch this…it may not be elegant but it gets the job done! pic.twitter.com/VURBjSYWKb

Kohli got a generation transported to the good old Sachin Tendulkar days, when he pulled Andy Caddick at Durban or the square-cut six off Shoaib Akhtar, a few days later. Skill apart, even the Tendulkar strokes were more about the moment than novelty. Michael Vaughan called him an alien, before giving his verdict, “Best Test player… KOHLI, best ODI player… KOHLI, best T20 player… KOHLI.”

VIRAT KOHLI IS FROM ANOTHER PLANET #Fact

“Unbelievable,” exclaimed the commentator Nasser Hussain. Sanjay Manjrekar exclaimed, “I haven’t seen anything like this before.” Alex Tudor in disbelief tweeted, “Did I just see that?”

Did I just see that @imVkohli stop it #INDvENG

Irish cricketer Andy Balbrine was honest enough to admit that he had not batted this well in ‘Stick Cricket’ as well.

Dilip Vengsarkar went on to draw comparisons of Kohli with Viv Richards.

While the social media went berserk, me writing the live blog for the match, struggled to name it. A short-arm jab? A loft over deep midwicket? A straight batted pull? I gave up and embedded a video tweet.

Good bats, smaller grounds have made batting easier but with the same have come the pressure of brisk scoring rate.

Kohli spends hours at gym and this hit off the Chris Woakes’ slower one (121 kph) is a testimony to his strength.

Harsha Bhogle in his CricBuzz column gives a logical explanation: “Kohli’s shot also tells us that the modern player is much stronger than most players of the past. It isn’t just about the bat but the power through the shoulders and forearms that is propelling the ball to such distant parts of the ground.

For a long time, this power was used to play hoicks through mid-wicket. And earlier the power came from jumping out, from a huge backlift and with the entire body participating in a giant heave. Not so any more.

Kohli’s shot was a great example of using power to play a composed, straight bat shot. To that extent, batsmanship has gone to another level and I think it is time we acknowledged that.”

We can all come up with our set of logical explanations. What the man himself had to say about the unthinkable hit.

“Yes (I surprised myself). Many times (smiling). It has happened a lot. I can recall many moments when I felt like I did not do this. I don’t know how it got executed.

But I have always spoken to the guys in the change room about the same thing. If you are focused on the goal, on the target you want to achieve, you do not necessarily need to think too much about the game, in terms of your personal runs or where you stand in the game”.

Kohli further explained in the press conference that the ‘how did I do that?’ moment is common with batsmen.

“I really feel that when you are in momentum in cricket that is a very important thing. You are able to play that kind of shots. If you are under pressure you will not be able to play, it is as simple as that.

Yes sometimes you feel ‘wow, how did that happen’. It is pretty evident with any batsman in the world. You can ask anyone. They pull off a few shots and then they will be like ‘How did I do that?’ It is just one of those things with all international batsmen,” he added.

Some honest and good insights.

Surely the method that led to it is all a resultant of the hard work and practice. The ‘instinctive’ part in cricket is again the resultant.

The innovation and strength produced is again rehearsed which steps to the fore on the occasion.

The amalgamation of strength, confidence and technique reminds me of my recent interview with VVS Laxman.

He had then said, Virat is a prime example where you have strong defence, at the same time you can dominate the bowlers and have the highest strike rate. We always talk about AB de Villiers, Chris Gayle and David Warner, but if you see Virat s strike rate, it is no less than these players who I always feel are destructive batsmen. But Virat s defensive technique will allow him to score runs consistently against the best bowlers in the world and also in tough conditions.

The reason is, he has a lot of self-belief and confidence on his defensive technique. I feel any youngster can learn watching Virat Kohli, who is probably the best batsman in world cricket at the moment. If you have a strong defensive technique, doesn t mean you comprise on your attacking game.

We are living in the Kohli-era. Await many such moments. Savour them. He may end up as the game’s greatest ‘complete’ batsman. Leaving Don Bradman out of the list. 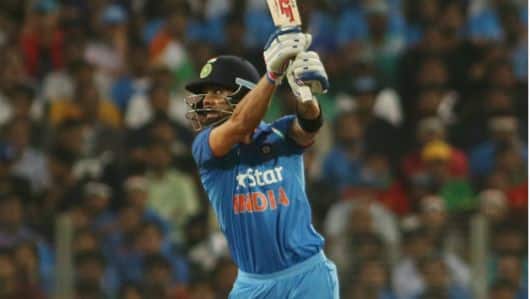