Wriddhiman Saha uses the age-old technique. If the bouncer is aimed at middle-and-leg, he simply moves towards off without even ducking; and when fired on off, he hides the bat behind his body, showing no signs of weakness.

With MS Dhoni already at India’s disposal, Wriddhiman Saha‘s journey to fame took a little longer than he deserved. Technically sound in wicketkeeping as well as batting, Saha has a conservative approach. Nimble between wickets and even more agile behind them, Saha oozes of Test cricket every time he steps out on the field. He had only two half-centuries in 21 innings before the start of the third Test between India and West Indies at the Darren Sammy International Stadium, Gros Islet, St Lucia. He has equalled Syed Kirmani and Dhoni’s record of most number of dismissals in an innings. Hence, batting was the only area he was yet to prove his mettle in. Full Cricket Scorecard: India vs West Indies, 3rd Test match

Given his traditional approach batsmanship, an innings of substance was overdue from Saha. And the third Test laid him the opportunity he had dreamt of ever since he donned India’s jersey. With half the side back in the pavilion for 124, Saha rose to the occasion and boasted of his batting skills. Driving on the up, playing down the ground, flicking over the infield: he played every shot with grace and panache. In fact, it looked as if he picked a particular shot from the textbook and dictated how to play it. In short, he was masterful.

However, his ability to play the short-pitched delivery is superior. If truth be told, barring Murali Vijay, no one from the current Indian team could tackle bouncers with comfort and ease. Till Saha arrived, that is. Saha has taken it to the next level. Yes, he has surpassed even the schematic Vijay.

There are many who watch the ball closely and leave it at the last moment. We have seen Rahul Dravid arch back, Sachin Tendulkar duck under, Ricky Ponting hook with perfection, Dhoni take blows; there are more examples.

Saha actually does all these, and to perfection. His batting at St Lucia was, in a way, a tutorial on how to play short balls.

Let us dissect his technique. He is armed with a simple stance, something the coaches teach on the first day of practice. He places the bat behind his back-foot, keeps it absolutely straight (with no angle whatsoever), partially leans forward, makes his body still and plays the ball without losing his balance. Of all these attributes, playing the ball without losing his balance is something that keeps him ahead of his contemporaries. Also read: Forget Pujara, why did India leave out Vijay against West Indies?

The reasons Virender Sehwag succeeded were a straight back-lift and a still head. Though cricket experts emphasised on his lack of footwork, his bat angle helped him bludgeon the bowlers. Nonetheless, like Sehwag, Saha keeps his head still, giving him extra time to read the ball.

But, why should one not bring the bat from an angle?

The answer is simple. It affects the hand-eye coordination. Look at Saha. With straight bat, his hands are in a better position to drop his wrist. And if it darts in, he can arch his back as much as he can and let the ball go past his chest. Of course, the reflex and fitness of a wicketkeeper help.

Saha’s application in his maiden Test hundred was flawless. With the pitch having an even covering of grass and equally good carry, falling prey to short balls was inevitable. India’s innings had unveiled exactly that way. While Shikhar Dhawan gloved it to the wicketkeeper, Virat Kohli failed to tackle an in-seaming bouncer, edging to slip.

On the other hand, Ajinkya Rahane counterattacked by playing an uppercut. All the same, Saha used the age-old technique. If the bouncer was aimed at middle-and-leg, he simply moved towards off without even ducking; and when fired on off, he hid the bat behind his body, showing no signs of weakness. Also read: Kohli replacing Pujara with Rohit uncalled for

He was once hit on the wrist, once on his elbow and once on his helmet. But not once did he get into an awkward position and look edgy. He knew his task: play with a straight bat and either drop the wrist or move out of the ball’s direction.

Though Ravichandran Ashwin was in the forefront of the rescue mission, Saha’s contribution was undoubtedly peerless. To be fair to him, the West Indian pacers bowled more fiercely at him than they did to Ashwin. In addition, Ashwin is much taller than the diminutive Saha.

This evidences the fact that the conventional form of cricket may be out of fashion or outdated, it does help your team to take it out of the woods. 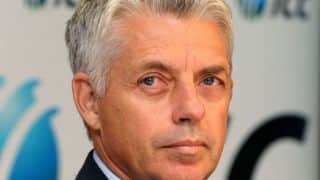 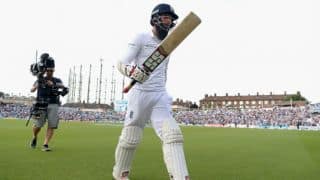