Composing one from the cricketers with their last names starting with W, CricketCountry Historian Arunabha Sengupta wades knee deep in a pool of extraordinary talent.

Alphabetical All Time XIs are great fun. Composing one from the cricketers with their last names starting with W, Arunabha Sengupta wades knee deep in a pool of extraordinary talent.

The three Ws. The three unparalleled West Indian greats, born within a few miles and a year and a bit of each other, all possessing last names starting with W.

When one touches upon an XI of W s, they are the first great names that pop into the mind. And they all walk in. Clyde Walcott, Everton Weekes and Frank Worrell one cannot do much better than this trio in the middle order.

Are there other claimants to middle order positions?

Of course there are. There are plenty of Ws, and before going further we have to consider the Waugh twins. Perhaps Graeme and Peter Pollock, other than that no pair of siblings can match the deeds of Steve and Mark Waugh at the Test level.

However, Mark Waugh, classy and delightful to watch, was too casual and prone to bringing about his own downfall to be seriously considered in an All-Time XI. His less gifted but far more dogged twin Steve ended with way better career numbers, as one of the best ever produced by Australia.

Room has to be made for Steve Waugh. In that case we do have four middle order batsmen. Thankfully both Worrell and Waugh were more than useful bowlers and can fill the position of batting all-rounders.

Yes, we can do with Waugh and Worrell combining as the fifth bowler. Because there is an outstanding quartet of bowlers who will be running in for this side.

Kane Williamson unfortunately has to sit out because of the cluttered middle order.

Courtney Walsh and Bob Willis, two towering gentlemen who bowled disconcertingly quick. It is one of the most potent opening combinations.

And they are followed by two spinners of the highest calibre. Shane Warne is acknowledged as perhaps the greatest leg-spinner ever. And left-arm tweaker Johnny Wardle has one of the best bowling averages among bowlers with 100 or more wickets, certainly at the top if we consider post-War men. If he had not written those injudicious newspaper articles, Wardle could have enjoyed a longer and greater career. But, in any case, one can hardly beat this pair as a spinning duo.

This makes the bowling attack one of the most balanced of all.

Some worthies who miss out are Max Walker in the bowling department, as well as Frank Woolley, Doug Walters and Shane Watson in the post of the batting all-rounder. Too bad, the available talent is just too brilliant and plentiful.

With our middle order and bowling attack ready, we have to zero in on the opening batsmen and the wicketkeeper.

At the top of the order the choices read Bill Woodfull, Cyril Washbrook, Kepler Wessels and David Warner. All four are extremely respectable names, and I have to go with the two with the best records. Hence the Aussie duo separated by several generations makes their way out to open the innings. Woodfull and Warner would be perfect foils for each other.

The wicketkeeping choices are plenty. We have options such as the modern day glovework of Matthew Wade, the ever-youthful Kiwi Ken Wadsworth who died tragically young and the current ebullience of BJ Watling. However, after much consideration I have to opt for John Waite, the South African keeper of the 1950s and 1960s, who crouched to take the thunderbolts of Neil Adcock and Peter Heine as efficiently as the metronomic spin of Hugh Tayfield, and was a good enough batsman to open the batting for his country regularly.

The team is balanced and, unlike some others, overflows with captains. Woodfull, Worrell, Waugh, Walsh, Willis all these men have led their countries with distinction.

But, I will go with Worrell as skipper, given that his name is synonymous with transforming leadership during a fascinating period of the West Indian game. 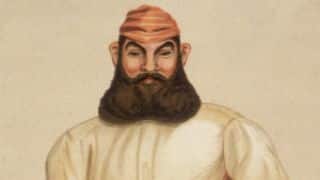