Yorkshiremen of the era took their cricket seriously, a tad too seriously, perhaps for a four hit by an overenthusiastic opener in the first hour of a match was often looked upon at disdainfully for how dare a batsman be careless enough to take his chances that early in the match?

Even the rise of Wilfred Rhodes as a batsman was often frowned upon: what right did a specialist bowler have to focus on his batting? Shouldn t he be focusing more and more on his bowling instead? What if the effort put on his batting made him lose his capability with ball?

For Yorkshiremen it was the results that mattered, not the charisma. Attractive cricket did not find much support in the country. The scores on next day s paper was all that was of any value. So hard-nosed a team were they that touring sides often treated the tour match against Yorkshire, often at Bramall Lane, as a sixth Test.

Emmott Robinson was typical of this Yorkshire attitude to cricket. His career was affected by The Great War. He made his First-Class debut at 35, but he made sure that it did not deter him: he played till 47, capturing 902 wickets at a shade over 22, toiling day in and day out with his medium-paced bowling.

He could swing the ball prodigiously, extracting movement when others failed to. He made sure the polish of the ball was retained for as long as possible, and often got annoyed when a fielder threw a ball on the bounce. Even then, his stamina and accuracy set him apart more than anything else.

Neville Cardus seldom gave in to sentiments when it came to cricketers who provided little aesthetic pleasure, but Robinson stirred up the emotions in him as well: Robinson seemed to be made out of the stuff of Yorkshire county. I imagine that the Lord one day gathered a heap of Yorkshire clay and breathed into it and said: Emmott Robinson, go on and bowl at the pavilion end for Yorkshire.

Unfortunately, unlike his uncle Wilfred Flowers, Robinson never played a Test, though he stood as umpire in the 1938 Ashes Test at Trent Bridge.

The incident dates back to 1928. Robinson did not have a great start to the season, with 2 wickets against Worcestershire and none against Essex. However, when George Macaulay and Rhodes ran through Essex in the second match, Robinson did what he was best at, finishing with 22-10-29-0.

Cambridge fielded a good team in that year s University match. Bryan Valentine would later score a hundred on Test debut; TC Longfield, later father-in-law of Ted Dexter, would lead Bengal to their maiden Ranji Trophy triumph; Walter Robins would lead Middlesex on either side of World War II and have a decent Test career; and Maurice Turnbull would play both cricket and Rugby Union for England.

The first day at Fenner s was washed out, as was some of the second day. Denis Blundell and Longfield reduced Yorkshire to 54 for 3, but Herbert Sutcliffe was more than what they could cope with. The champion remained unbeaten on 81 when William Worsley (leading Yorkshire in the only First-Class match of his career) declared at 224 for 5 to have a go at the undergraduates.

Robinson and George Macaulay then bowled unchanged to skittle out Cambridge for 30 in 26.2 overs. It included a recovery for sorts, for they were reduced to 16 for 8 (they were 9 for 5 at one point).

Robinson bowled slow (Arthur Wood even managed a stumping off him) and straight and moved the ball just about enough, to which the inexperienced batsmen had little answer. He had astounding figures of 13.2-5-13-8.

Also making his debut in the match was Allan Shackleton, who bowled both medium-pace and leg-breaks. A 20-year-old keen to impress, Shackleton was fielding at cover when Longfield hit one to him at rapid pace. And to everyone s (especially his own) horror, Shackleton mis-fielded, and the students scampered for a single.

However, Shackleton more than made up for it. The batsmen did not stop after running the single: going for the second run, and Longfield fell short.

As the players returned, scorer Billy Ringrose announced the figures. Shackleton, perhaps buoyed a bit by the run out, mustered the courage to congratulate Robinson: Eight for thirteen: marvellous.

Only a Yorkshireman could have come up with the response Shackleton got: Ay, eight for thirteen; and if tha d been half awake, it d have been eight for twelve.

As for the rest of the match, time ran out with Cambridge on 41 for 5 after they followed on. 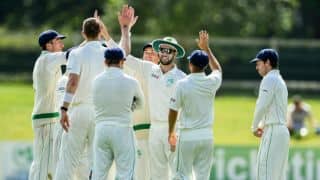 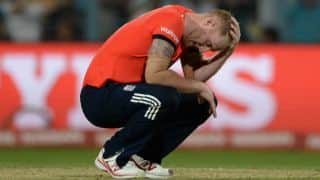