This was not expected from Sachin Tendulkar!

This was not expected from Sachin Tendulkar!

In yet another incident which can be termed as a national shame, Sachin Tendulkar has sneezed three times in a row. Surprising it may sound, this is the first time in his life he has allowed such an incident happen. 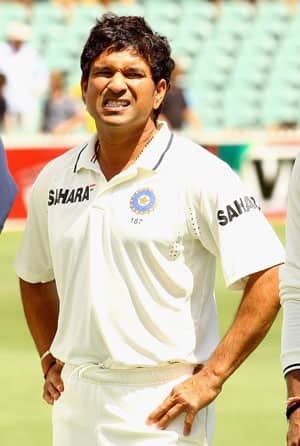 An eight-page medical report hints at viral activity inside Sachin Tendulkar’s (above) nasal mucous and that his immunity level is at an all time low. The message is loud and clear: “Sachin needs rest.” © Getty Images

In yet another incident which can be termed as a national shame, Sachin Tendulkar has sneezed three times in a row. Surprising it may sound, this is the first time in his life he has allowed such an incident happen.

Amidst the open gathering of New Zealand crowd, Tendulkar could not prevent the convulsive explosion of air from his lungs through nose and mouth. Not once, not twice, but thrice in a row within a short span of six seconds!

Faking News could access an eight-page medical report, which hints at viral activity inside his nasal mucous and his immunity level being at an all time low. The message is loud and clear: “Sachin needs rest”, claim sources that leaked the report.

We tried to get in touch with Tendulkar for a statement, but he was not available. His secretary issued a statement terming the incident as an allegation by his rivals who cannot withstand his success in cricket and political world.

Unexpectedly, Digvijay Singh called up our office today for a statement without us approaching him. But expectedly, he put the blame squarely on Rashtriya Swayamsevak Sangh (RSS).

Digvijay said: “My colleagues told me that Sachin has been found interacting with Modi several times in the past during IPL sessions. I suspect Modi’s hand in this and hence RSS is behind this act.”

To Digvijay’s embarrassment, when we told him that it was Lalit Modi with whom Tendulkar interacted during the Indian Premier League (IPL), Digvijay started mumbling and terminated the phone call.

Congress’ yuvraj, Rahul Gandhi, who was having a happy meal in the hut of a dalit named “Mak Dhee” was shocked when his messenger delivered this news to him via local train. Rahul said, “I feel ashamed to call myself Indian”.

This is the 912th time Rahul has made the same statement – the last being during his meet with farmers in Greater Noida.

Anna Hazare, too, has issued a statement, which insists the importance of Jan Lokpal Bill that could have been used to find out the root cause for Tendulkar’s action today.

He said: “It had never happened in Sachin’s 23 years long career before and it has happened only after he joined the Rajya Sabha. I suspect Parliament virus entering his system. With Jan Lokpal Bill, we can find out who injected this virus during his Parliamentary session.”

Meanwhile, Amitabh Bachchan sent an SMS from his son’s Idea cellular phone requesting Tendulkar to join him for the next ad for Dabur Chyawanprash, which will ensure that his immune system stays high and help in avoiding repetition of such incidents in future.

But the big question that still remains: “Should Sachin take rest?”

(GP Guruprasad is a professional software engineer on weekdays and a casual photographer during weekends. His areas of interests include technology, photography, psychology, history, sports, satire and more. Reproduced with permission from www.fakingnews.com)