Tim Southee was lethal today as he secured career best figures of seven for 33 from nine overs. This is the third best figures by a bowler in World Cups this performance completely dismantled the England batting line-up. Pramod Ananth looks back at five of his unplayable deliveries today.

Excellent out swinger to Ian Bell: Ian Bell got an absolute peach of a delivery. He committed himself to a full delivery on middle stump and the ball shaped away right at the last moment, beat the bat and hit off-stump. Bell had no clue as to what hit him as he walked back to the pavilion for just eight. There was not much he could have done about it.ICC Cricket World Cup 2015: POINTS TABLE

Moeen Ali gets a bowled off a yorker: Moeen was set up beautifully by Southee: Southee bowled a short delivery —a wide — off the first delivery of the seventh over. He was expecting another one around the same length. But, Southee bowled an excellent in swinging yorker that hit Moeen’s leg stump. Moeen tried to squeeze the ball out, but the ball kept coming into him — and eventually crashed into the stumps. With both openers back in the hut in quick succession, New Zealand were on top at this moment.

James Taylor bowled off another yorker: Taylor, who narrowly missed out on his maiden century in the previous match against Australia, didn’t last long either. Southee beat Taylor off the first ball he faced and the very next delivery was an out-swinging yorker which hit off-stump and left Taylor absolutely clueless.ICC Cricket World Cup 2015: SCHEDULE & MATCH DETAILS

Chris Woakes follows suit: When the top order batsmen failed to hang around, one cannot expect Woakes to negotiate lethal deliveries of Southee. He got probably the best of the lot as he failed to put bat to ball on yet another out swinging delivery from Southee. Woakes was beaten all ends up and the ball crashed into the stumps.

Jos Buttler dismissed caught-behind: Ironically, wicketkeeper Jos Buttler was dismissed caught-behind. Buttler, the man behind the wickets when the likes of James Anderson and Stuart Board steam in to bowl, was at the receiving end this time: he fished outside his off-stump to an out-swinger; it found the outside edge. Buttler went for three and with him went England’s chance of putting up a decent score with Joe Root stranded at the other end.ICC Cricket World Cup 2015: Complete Coverage

Southee was awarded Man of the Match for his brilliant bowling display. Brendon McCullum’s 25-ball 77 ensured that New Zealand won the match by eight wickets with close to 38 overs to spare. If that is not comprehensive, nothing is!

ICC Cricket World Cup 2015: Tim Southee joins the 7- ​for club in the tournament 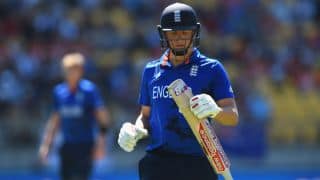