On June 10, 2012, Tino Best registered the highest score by a No 11 in Tests, smashing 95 to take West Indies to its first total of over 400 in the series against England. Owing to weather, most part of the game had been washed out, but the fact remains that it was a Test during which the visitors had put up a fight. Karthik Parimal looks back at that eventful day that also saw an untoward gesture by Denesh Ramdin. 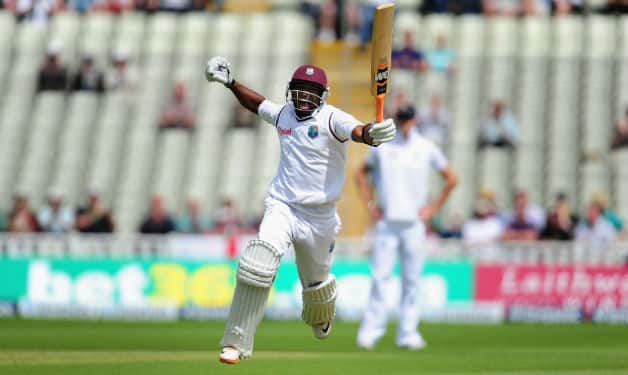 The most emphatic moment in the match came when Tino Best brought up his fifty, and celebrated like he’d just overtaken Brian Lara’s longstanding Test record © Getty Images

On June 10, 2012, Tino Best registered the highest score by a No 11 in Tests, smashing 95 to take West Indies to its first total of over 400 in the series against England. Owing to weather, most part of the game had been washed out, but the fact remains that it was a Test during which the visitors had put up a fight. Karthik Parimal looks back at that eventful day that also saw an untoward gesture by Denesh Ramdin.


England were clear favourites before the commencement of the series, and this fact was reinstated with crushing victories in the first two Tests over a hapless West Indian unit at Lord’s and Nottingham. As the two teams headed to Edgbaston for the final fixture, things looked bleak, both for the visitors and climatically. The first two days were washed-out, and West Indies scrapped to 280 for the loss of eight wickets on the third. Apart from Marlon Samuel’s 76 and Denesh Ramdin’s unbeaten 60, none showed stomach. However, all that changed on the fourth day.

That morning, when the ninth wicket fell for 283 runs on the board, No 11 batsman Tino Best walked out sans any expectations. Perhaps the rest of the players in the West Indian dressing room were already changing into their fielding gears, but little would they have expected what followed from the willow of the tail-ender.

Best began confidently, driving like a top-order batsman and hitting over the top, and also handing over the strike to his partner Ramdin, who was in the midst of an inspired knock by then, on a consistent basis. The former’s batting made for an intriguing watch; his follow through after each shot, notwithstanding the outcome, provided some chuckles. However, it must be said that he connected more often than not. The most emphatic moment, though, was when he brought up his fifty, and then celebrated like he’d just overtaken Brian Lara’s longstanding Test record.

He cut, pulled, drove and edged his way to 95, before a miscued hit off Graham Onions deprived him of immortality. For a bowler, whose best with the bat prior to this knock was 27, to register the highest score by a No 11 is incredible. That innings, alongside Ramdin’s, steered West Indies’ total to over 400 for the first time in the series. Best lasted 112 deliveries.

Denesh Ramdin talks; not just with the bat

It was during this fixture that a certain Denesh Ramdin romped his way to a century, but duly copped criticism from all quarters for his untowardly gesture after reaching the coveted landmark. Unhappy with Ramdin’s consistent failures despite showing tremendous promise, legendary West Indian batsman Sir Viv Richards expressed his displeasure. “Ramdin just looks out of sorts. When he first came into the game, I felt he was a huge prospect. For some reason, he has deteriorated in such a big way. Just the way he is walking back, he looks like a totally lost guy,” Viv Richards rightly noted.

However, the feedback didn’t go down well with Ramdin. It nevertheless did motivate him to pocket a century against one of the finest attacks in the world, but what took the sheen off that momentous occasion was the gesture that followed. After scampering through for a single to reach the three-figure mark, Ramdin pulled out a piece of paper from his pocket, and on it was a message written in bold letters. It read: “Yea Viv Talk Nah”. The dressing room was, no doubt, elated, but not many sided with Ramdin’s reaction. Soon, the batsman himself would regret that moment of madness.

Viv Richards, though, remained unflustered by the gesture. “That innings was a long time coming. If you are given enough chances then you will get it done. [But] This was in a losing cause. If, in a football match, you are losing 5-0 and then score a goal in the last minute, you would not jump for joy. I set my standards a little higher,” he told the BBC.

Ramdin, although repentant, was fined 20 per cent of his match fee. “We all understand the importance of celebrating a milestone, however, one should not use that time as an opportunity to hit out at one’s critic or send messages to the world,” match referee Roshan Mahanama aptly said in a statement.

Owing to the dreadful weather, three days of play were washed out. West Indies had lost the first two Tests and had no comeback route, but it was the only game during which they put up some fight. Nevertheless, it duly ended in a draw. Best opened the bowling and took two English scalps, thereby claiming the Player of the Match award.

Is the BCCI's 12-point 'Operation Clean Up' for the IPL good enough?