Tom Sueter was a Hambledon cricketer during the second half of the 18th century.

Tom Sueter, born April 17, 1750, was a Hambledon cricketer during the second half of the 18th century. Arunabha Sengupta pays tribute to the batsman who has gone down in history as the first man to step down the wicket to hit a ball.

The scenic village green of Hambledon, set in rural Hampshire the cradle of cricket in the late 18th century. Where landowning gentlefolk mingled with the farmers, shepherds, blacksmiths and craftsmen to engage in the unifying game in its unadulterated, purest infancy.

Thus are we led to believe from the chronicles of John Nyren, published as The Young Cricketer s Tutor in 1833. Much of cricket s romantic appeal of those ‘innocent days stems from Nyren s prose, which combines the game with moral probity, dignity and Englishness of the Hambledon cricketers.

Thomas Brett, the fast bowler, supposedly ‘bore the universal character of a strictly honourable man in all his transactions . And the ‘word of Tom Sueter, the wicketkeeper, ‘was never questioned by the gentlemen associated with him .

Well, Hambledon in reality was hardly a pristine sanctuary of all that is noble and true. It was a sophisticated nursery for training and development of professional cricketers, run by the moneyed class for the entertainment of the rich entertainment that involved large amounts of money staked on the outcome of the matches. And cricket had already reached the big cities when Hambledon came into the picture.

Nyren is closer to the truth when describing the club as ‘the Attica of the scientific art . It was the scene of rapid technical development, and the famed Tom Sueter whatever be the truth or fable about his integrity was one of the leading innovators to grace the game.

Sueter, born in 1750, was a left-handed batsman and one of the two most renowned wicketkeepers of the 18th century alongside William Yalden. More importantly, he is recorded as the first batsman in history to step out of his crease to hit the ball. According to Nyren, he was “the first to depart from the custom of the old players before him, who deemed it heresy to leave the crease for the ball, but he would get in at it, hit it straight off and straight on, and egad it went as if it had been fired.”

A carpenter and builder by profession, Sueter was also supposed to be an excellent judge of a run. His talents, however, extended beyond the game. Along with George Leer, a decent bat and fantastic long-stop off Thomas Brett s scorching bowling, Sueter was an excellent singer and belonged to the choir at the parish church. He was also supposed to be popular with the ladies at least that is how he has been immortalised by Andrew Lang in his Ballade of the Dead Cricketers:

“And where is Lambert, that would get / The stumps with balls that broke astray?/And Mann, whose balls would ricochet/ In almost an unholy way / (So do baseballers “pitch” to-day) / George Leer, that seldom let a bye/ And Richard Nyren, grave and gray?/ Beneath the daisies, there they lie!/

Tom Sueter, too, the ladies’ pet,/Brown that would bravest hearts affray;/ Walker, invincible when set,/(Tom, of the spider limbs and splay);/ Think ye that we could match them, pray,/These heroes of Broad-halfpenny,/ With Buck to hit, and Small to stay?/ Beneath the daisies, there they lie!” 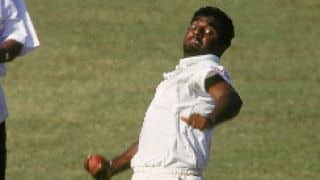