Tony Greig finished with match figures of 69.1-17-156-13 the best post-War overseas match figures for an Englishman at that time. Only Ian Botham (13 for 106) has done better.

Tony Greig bowled swing and seam, and when they did not work, he moved to the newly practised art of off-breaks. In a side packed with three specialist spinners, Greig was at best a seamer who was perfecting his off-spin, but he rose to the occasion. Abhishek Mukherjee looks back at April 5, 1974 the day that saw a thrilling climax unfold at Queen s Park Oval.

Throughout the 1970s, the West Indians seldom took a liking to Tony Greig, and the admiration, or lack of it, was mutual. Greig, the English vice-captain, had played 19 Tests when he took field for the first Test at Queen s Park Oval. Despite having an ordinary Test, Greig created sensation when he infamously ran out Alvin Kallicharran after the final ball of the Test was bowled.

The decision was reversed (and is a part of history now). West Indies won by 7 wickets. They acquired a 230-run lead at Sabina Park, but Dennis Amiss batted out of his skin, saving the Test, batting nine-and-a-half hours for his epic 262. The Kensington Oval Test, remembered mostly for Lawrence Rowe s dazzling 302, was almost an encore: West Indies led by 201 (after Greig scored 148) and had England down at 40 for 4, but this time Keith Fletcher came to their rescue.

Bourda was deprived of 13 hours of cricket by rain, which meant that though England scored 448 (Amiss 118, Greig 121) the sides returned to Queen s Park Oval with West Indies 1-0. England had to win the Test.

To be fair to the Englishmen, West Indies had a stupendous batting line-up: Garry Sobers and Rohan Kanhai were ageing, but were, by no means, past their prime; and there was the young quartet of Clive Lloyd, Kallicharran, Roy Fredericks, and the prodigy that went by the name of Lawrence Rowe. In Keith Boyce and Bernard Julien they had an excellent pair of new-ball bowlers; the attack was backed by Lance Gibbs; and of course, towering above everyone, there was Sobers.

It was decided that if the rubber was alive going into the last Test, it would have to be a six-day affair. Queen s Park Oval was usually slow and low and typically offered turn, and this one was no exception. While West Indies brought in Inshan Ali (who bowled Chinamen) to support Gibbs and Sobers, England went in with the trio of Derek Underwood, Pat Pocock, and Jack Birkenshaw.

Mike Denness batted first, and Geoffrey Boycott and Dennis Amiss set about what they have done throughout their illustrious careers: accumulate. Boycott suffered a scare early in his innings. When he was on 9, he played one to Kanhai at fine-leg and should have been run out by a distance; Kanhai threw terribly; it eventually cost West Indies the Test.

Boycott and Amiss batted for close to three hours for a stand of 83 valuable runs before Sobers had the latter caught-behind. Denness hung around grimly, as did Fletcher after him, but neither could match Boycott for technique or temperament. Boycott, who had spent 50 minutes without scoring at one point, simply refused to take risks. Greig played a few strokes, and England finished the day on 198 for 4 with Boycott on 97 and Frank Hayes on 12.

A day for spinners

Inshan Ali removed Hayes early, but the big wicket went to Julien: Boycott, having scored 93 in the first Test at the same ground, tried to play one down the leg when on 99. Deryck Murray came up with an excellent left-handed catch. England collapsed to 267, losing their last six wickets for 63. Between them, Boycott and Amiss had scored 143 of these. Alan Knott was the only one to put up some resistance with 33 not out; Inshan Ali and Gibbs shared six wickets between them.

Fredericks and Rowe began in style, racing to 110 in 143 minutes before Pocock struck: not only did he have Fredericks caught by Fletcher, but also made Kallicharran hit one back to him. West Indies slumped to 122 for 2, but recovered to 174 for 2 at stumps with Rowe on 75 and Lloyd on 21. They trailed by a mere 93.

Play resumed after rest day, and West Indies reached 208 for 2 at lunch with Rowe on 90 and Lloyd on 40. Greig replaced Pocock shortly afterwards, but runs kept coming. The deficit was below fifty when Greig struck. It was during the second Test that Greig had experimented with his off-breaks after being hit all over Sabina Park by Lloyd. He had done a competent job. Though he did not get Lloyd (who became John Jameson s only Test wicket), he removed both Kanhai and Sobers: a good haul.

Greig replaced Pocock. Standing at 6 6 , he gripped the ball with his enormous fingers; he bowled to a perfect line and length, extracting turn, not experimenting too much; he bowled over the wicket to right-handed batsmen and round the wicket to the southpaws; and emerged triumphant against an exceptional batting line-up.

West Indies batted deep, with that dazzling duo of Julien and Boyce at Nos. 8 and 9. Both men played defiantly, but in the end Greig got the better of both. He claimed Rowe as well (albeit for 123), and finished things off by trapping Inshan Ali leg-before.

Day Four started with two major blows for England: Amiss was bowled by Lloyd, and Denness was run out. They led by a mere 6 when Fletcher joined Boycott; the pair added 101 in a little over three hours, batting with dogged determination. Pocock, promoted as night-watchman, played out the day, and England finished on 158 for 3: the lead had been stretched to 120.

Boycott refused to throw his wicket away this time. The seamers took out Pocock, Greig, and Hayes in the span of seven runs. The 138-run lead was not going to be enough. Who would hold fort with Boycott?

Knott rose to the occasion. He had remained unbeaten in the first innings; this time, too, he hung around despite his unorthodox batsmanship. It was the kind of support Boycott needed. This time he did not falter: he duly scored a hundred, and by the time Gibbs eventually ran through his defence, Boycott had scored 112. He had faced 725 balls in the Test and had batted for over 13 hours.

Knott brought his shots out, helping England put up a crucial 51 for the last three wickets. Denness opted for Greig straight away, and the Sussex giant started with his off-breaks. West Indies, set 226, finished on 30 without loss with the openers on 13 apiece.

Rowe and Fredericks added 63 for the opening stand. Just when it seemed that the match would slip from England s grasp, Rowe erred in judgement, played back-foot to a good-length ball from Birkenshaw, and was trapped leg-before. Kallicharran edged one to Fletcher at first slip off Greig for nought.

Then Fredericks flicked one past Boycott and set off for a second run. Lloyd did not respond, but started running when he realised he would be run out. He crossed Fredericks just before the ball reached Knott, and Fredericks was run out. West Indies slumped to 65 for 3, losing three wickets in nine balls.

It was then that Greig slowly spread his web: it was not fancy bowling; he simply refused to let the flamboyant strokeplayers score. He claimed Kanhai, who edged one to Fletcher, and Lloyd, who hit one back to him. West Indies still needed 141. They had five wickets in hand.

But they still had Sobers, not to speak of Murray, Julien, and Boyce. Sobers, far from his cavalier self, batted slowly, even letting Murray to take control of proceedings. They added 50; suddenly 226 did not seem too far away. Then Deadly Underwood hit timber to send Sobers packing. Pocock removed Julien three runs later. Boyce came to rescue, but when Greig claimed Murray, West Indies still needed 60. Inshan Ali strode out.

Inshan Ali batted with a focus not displayed by most men up the order. The target kept reducing, below 50, 40, 30 till Denness, desperate for a wicket, claimed the second new ball. And Greig responded, removing Inshan Ali. They needed another 29.

Gibbs did not have it in him to see West Indies through. Geoff Arnold, who had scored 6 and 13 in the Test and had gone wicketless till then, bowled him fifth ball. England won by 26 runs, levelling the series.

– Wisden was in all praise of Greig, calling for a replacement at the top: Not surprisingly his success gave rise to conjecture about his future as England’s captain, especially as Denness’s performances, both as captain and as player, were less convincing Undoubtedly Greig could end up as England’s captain, but there were moments on this tour when it would have been embarrassing had he been England’s current leader Greig as vice-captain gained more kudos than did Denness, the captain. The latter was handicapped by his inexperience in cricket at this level, both as a tactician and as a player.

– Greig would eventually lead England against West Indies in the infamous grovel series, but that is another story. 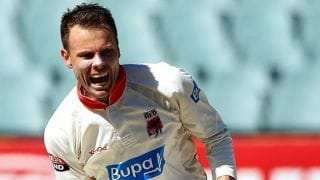 IPL 2015: Johan Botha says he is ready and raring to go

David Warner and Candice Falzon get married in Berry