Cameron has assured the Indian government that he will happily return Mallya to India if they hand over his asset Kohli to United Kingdom.

India has been an unlucky country when it comes to extradition. Some of their most-wanted fugitives like Dawood Ibrahim, Masood Azhar, Nadeem Saifi and Lalit Modi have been living a free life in Pakistan and the United Kingdom (UK). Time and again India’s efforts to bring them back have been thwarted by the authorities of the respective countries. Worse, taking a cue from these fugitives — who have been successfully escaping the law for a long time now — new offenders (read Vijay Mallya) have also followed in their footsteps and left India for good.

When Mallya, who is also a Member of Parliament (MP) in the upper house, left India for UK, it was a tight slap to the country. But since India had an extradition treaty with the UK, there were hopes that Mallya will be brought to the books. UK Prime Minister David Cameron had in fact even agreed to Mallya’s extradition in principal after being pressurised by the South African government as a consortium of India’s public sector banks demanded to freeze AB de Villiers considering the Protean, who plays for Royal Challengers Bangalore (RCB), was a Mallya-asset.

But according to a recent development, Cameron has placed a demand in exchange for Mallya’s extradition. He has assured the Indian government that he will happily return Mallya to India IF they hand over another Mallya-asset: Virat Kohli. A source close to the UK Prime Minister said, “Our PM is a cricket fanatic. He has spent his entire life hoping he could see the England cricket team’s dominance on world cricket one day. The team has been doing well of late, but there is still a long way to go. And if Kohli plays for England, there will be no stopping us. This is our best chance of having him. We are in the bargaining position, aren’t we?”

This has put the Indian government in a dilemma. A source from the Ministry of External Affairs (MEA) said on the matter, “See, we need Mallya. There’s no two ways about it. But that cannot happen at the cost of Kohli. They may have taken our ‘Kohinoor,’ but we will not let them take our ‘Koh(l)inoor.’ We were in fact planning to declare Kohli as a national treasure. Acceding to this demand is simply out of question.” The source further added that the Indian government had offered Suresh Raina, Ravindra Jadeja, Rohit Sharma, and Ishant Sharma in exchange for Mallya, but the UK authorities are hell bent on Kohli. Last heard, the deadlock continues. 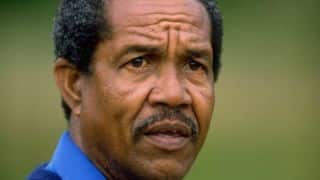