Umpiring conundrums in cricket 1: Who is out?

Umpiring conundrums in cricket 1: Who is out?

There can be some situations in cricket, very legitimate ones, that might confuse the most diligent followers of the game. Arunabha Sengupta looks at one such scenario.

In the 1939 Wisden Almanac, the last one that they produced before the Second World War, former England pace bowler and captain Arthur Gilligan documented some real posers. Listed under the title Cricket Conundrums, they were a collection of situations which lent themselves to nontrivial interpretations of the Laws of Cricket, which even caught some of the most diligent followers of cricket on the wrong foot. One such was a question on the type of dismissal, and indeed which batsman was out. To ensure that the piece also serves as a proper riddle, I would ask the readers to try to solve the question themselves.

Gilligan created the fictitious scene of bowler Jones bowling to batsman Smith, while Robinson is standing as the non-striker. Smith hits a very hard return catch to the bowler. Jones just about manages to touch the ball, and this ball is deflected onto the stumps with Robinson out of his ground.

However, that is not the end of it. On striking the woodwork at the non-striker’s end, the ball flies off, still in the air and not having touched the ground, and it is caught by the fielder Brown at mid on.

The question posed is which batsman is out? Is Robinson run out? Or is Smith caught Brown bowled Jones?

Please think about it for a couple of minutes before scrolling down for the answer. According to Gilligan, he asked the question to over a hundred enthusiasts. And practically 90 per cent decreed that Robinson was run out. Later, in 1938, at Hastings, he put the question to the legendary Frank Chester and his fellow seasoned umpire Jack Newman. The archives show that it was during the Sussex-Kent match in August, which the former won by an innings in spite of the 7-wicket haul of Doug Wright.

The two umpires, independently and without any hesitation, responded: “Smith is out caught.” Gilligan writes, “that is indeed the correct answer.” However, if we look at Law 20.1.1.3, we find it stating: “Ball is dead when a batsman is dismissed. The ball will be deemed to be dead from the instant of the incident causing the dismissal.”

So, if the wicket is broken while the batsman is out of his ground, that does constitute a dismissal in cricket. Should the ball be considered dead when that happens? Then the catch is irrelevant. Or is the ball considered dead only if the ball is not caught on the full?

It is indeed not a simple situation. What do you think?

Arunabha Sengupta is a cricket historian. He writes about the history of cricket, with occasional statistical pieces and reflections on the modern game. He is also the author of four novels, the most recent being Sherlock Holmes and the Birth of The Ashes. He tweets @senantix
First Published on August 9, 2017 4:31 PM IST
Last updated on August 10, 2017 2:05 PM IST
TOPICS:
Arthur Gilligan England Sundries Sussex Umpiring conundrums 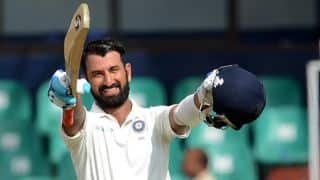