Umpiring conundrums in cricket 10: How long can you run?

Umpiring conundrums in cricket 10: How long can you run?

The Therecombe opening batsman waited as Little Smith ran in. Unfortunately, the wait was longer than he had anticipated, for little Smith was doing something the spectators had never seen before...

Once again we turn to the remarkable Herbert Farjeon. For the uninitiated, Herbert Farjeon was a great playwright (that is an understatement; he was basically everything when it came to theatres), but there was more to him than that. Not many minds in other professions have given the laws of cricket so much thought.

Herecombe v. Therecombe (you can find it in Herbert Farjeon s Cricket Bag) remains one of the most iconic short stories in the history of the sport. Perhaps only Sir Arthur Conan Doyle s Spedegue s Dropper matches its stature.

Herecombe and Therecombe were old antagonists , and as is often the case, nothing exemplified this animosity more than cricket matches. The story involves one of these matches.

The Herecombe captain opted to bat first and strode out himself. The first thing he faced was an astonishing ball, striking a flint the ground was like that and skidding at right angles to square leg.

The captain had a swing and a miss and obvious made no contact. He yelled rather audibly, out of exasperation more than anything else: Well, I declare!

Seizing the opportunity, the Therecombe captain marched out of the ground with his men. When asked, he simply responded that the Herecombe had declared the innings. Unfortunately, there was nothing the umpires could do to disprove him.

However, the guilty Herecombe captain was convinced he could save the match ( you go in and win if you can ). The Therecombe batsmen walked out with a target of a solitary run.

The Herecombe captain threw the ball to little Smith, who had never bowled in his life but had won the local Marathon once, after uttering a few words of advice.

The Therecombe opening batsman waited as Little Smith ran in. Unfortunately, the wait was longer than he had anticipated, for little Smith was doing something the spectators had never seen before: He began running round in circles … turning and twisting twisting and turning darting this way and that hopping, skipping, jumping a most eccentric run, indeed but never delivering the ball.

The batsmen protested, but the Herecombe captain simply responded (unabashedly, I must admit here) that they were just playing out time .

So little Smith ran and ran as the clock ticked over. The laws were rummaged through, but there was nothing on the duration of the bowler s run-up. So little Smith continued… till it was 7 PM the stipulated time for close of play. The batsmen had to remain vigilant (what if he bowled without warning?). The fielders relaxed on the ground.

The sun had set, leaving the ground in darkness. The laws had to be consulted again: you surely cannot call a day s play off during a ball?

So little Smith had to bowl. He did the most sensible thing: he waited till it came down to near-zero visibility.

Then his captain summoned the fielders, making six of them flank the wicketkeeper to prevent byes.

Little Smith bowled. The batsman swung and missed. There was no run. The jubilant Herecombe captain began celebrating the draw.

Unfortunately for him, the Herecombe captain brought things to an end by appealing for bad light. It was upheld.

Now, had you been officiating in the match, would the match have proceeded exactly the same way? 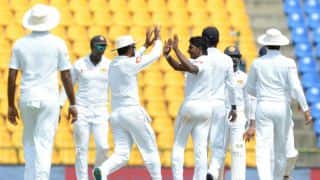