Umpiring Conundrums in cricket 11: Who caught the ball?

Umpiring Conundrums in cricket 11: Who caught the ball?

There can be some situations in cricket, very legitimate ones, that might confuse the most diligent followers of the game. In this series we look at several such scenarios.

There can be some situations in cricket, very legitimate ones, that might confuse the most diligent followers of the game. In this series we look at several such scenarios. In this particular episode Arunabha Sengupta wonders whether a catch can be made without making it possible to jot it down in the scorecard.

Bowler Jones sends in a late out-swinger and batsman Smith flashes at it. The ball, a fair delivery, takes the edge and flies to the crowded slip area. Jackson moves to the right from first slip, Bardsley to the left from second slip. Both grab the ball, and they end up in a tangle. Jackson s right hand and Bardsley s left form a clutch and the ball is trapped within.

In the appendix, we have reproduced Law 32 of cricket, which governs the ruling of a dismissal through a catch. And there we see that a ball caught by two fielders together does meet all the criteria of a fair catch. Especially the sub-clause 3b makes it clear that it is a fair catch. However, the law stipulates a fielder catching the ball, and in this case there are two fielders. There remains a niggling doubt.

If Jackson and Bardsley raise their hands together in celebration, holding the ball in their combined clasp, they have indeed caught the ball while in the air and have held on to it while bringing their motion to a stop.

Now, if they let the ball go together, say on the count of three, without one of them ending up holding the ball alone, there are several questions that arise.

2. If Smith is caught, who took the catch?

3. How do we write it down on the scorecard? Smith c Jackson c Bardsley b Jones 27?

4. How do the databases register the catch? Half to Jackson and half to Bardsley. Is it that Jackson ends his career with 33 catches and Bardsley with 65 ?

To clear all doubts, let us look at the law.

The striker is out Caught if a ball delivered by the bowler, not being a No ball, touches his bat without having previously been in contact with any fielder, and is subsequently held by a fielder as a fair catch, as described in 3 below, before it touches the ground.

If the criteria of 1 above are met and the striker is not out Bowled, then he is out Caught, even though a decision against either batsman for another method of dismissal would be justified.

Providing that in every case

neither (i) at any time the ball nor (ii) throughout the act of making the catch as defined in Law 19.4, any fielder in contact with the ball is, as described in Law 19.3 (b), touching the boundary or grounded beyond the boundary, a catch shall be considered to be fair if

(a) The ball is hugged to the body of the catcher or accidentally lodges in his clothing or, in the case of a wicket-keeper only, in his pads. However, it is not a fair catch if the ball lodges in a protective helmet worn by a fielder.

(b) The ball does not touch the ground even though the hand holding it does so in effecting the catch.

(c) A fielder catches the ball after it has been lawfully struck more than once by the striker, but only if it has not been grounded since it was first struck.

(d) a fielder catches the ball after it has touched an umpire, another fielder or the other batsman.

However, it is not a fair catch if at any time after having been struck by the bat and before a catch is completed the ball has touched a protective helmet worn by a fielder.

(f) The ball is caught off an obstruction within the boundary that has not been designated a boundary by the umpires before the toss.

4. Fielder beyond the boundary

(ii) Catches the ball after it has crossed the boundary in the air without the conditions in 3(e) above being satisfied. 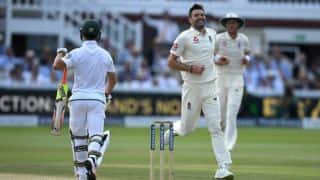