This is about an incident of a batsman holding on to the stumps for dear life.

Let us imagine the following scenario. Team X set Team Y an enormous target to chase and many, many minutes to survive. Y decided on a blockathon and did it remarkably well, taking it down to the last over of the Test with two wickets in hand.

Then they lost a wicket off the fifth ball, and their No. 11, a batsman (let s call him Taylor) so inept that even the word bunny flatters him, walked out to survive the final ball. The bowler was the dangerous fast bowler Khan, whom we have encountered several times in our umpiring conundrums series.

But there was something odd about Taylor s entire getup. He had two pads on, which is normal, but also two thigh-pads. But the bizarre bit was that he wore them at the back of his thighs and legs. There was also a chest guard on his back. But most interestingly, there was no bat or glove.

Khan waited quizzically at the top of his bowling mark. Now, the moment Khan began his long run-up, Taylor did something extremely odd: he turned around and held the bails firmly on to the stumps with both hands, guarding all three of them.

This obviously confused Khan, who stopped in his run-up and complained to the umpire. The men in coats discussed, but could not come up with anything.

While Laws 30.1 and 30.2 discuss in details how and when a striker is outside his ground, they do not mention what he is supposed to do when he is inside or where he is supposed to stand inside the crease. Law 30.3, on the other hand, deals with the position of the non-striker.

So Khan had no alternative. He had to bowl with Taylor clutching on to the bails, displaying his posterior towards Khan. Khan bowled as straight as he could, but really could not deliver anything straight enough to hit those pads. The ball brushed the off-stump and lands in the wicketkeeper s gloves.

The fielding side appealed, but there is little the umpire could do. The wicket needed to be put down for a batsman to be ruled either bowled or hit wicket, which obviously had not happened here as per Law 29: The wicket is put down if a bail is completely removed from the top of the stumps, or a stump is struck out of the ground.

What would you have done? 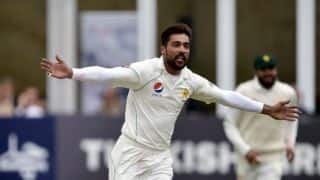