Glichrist's tweet clearly stated 'T20 ball of the century', and it's unfair to compare the two balls.

Ravichandran Ashwin outsmarted Hashim Amla with a delivery that spun sharply from outside the leg-stump and cannoned into the stumps. Adam Gilchrist called it the ‘T20 ball of the century’, sparking unfair comparisons with Shane Warne’s delivery to Mike Gatting in 1993. Nishad Pai Vaidya delves into the issue.

Hashim Amla had settled in when Ravichandran Ashwin was handed the ball during the second semi-final of the ICC World T20 2014 between India and South Africa. The South African had just moved into his stride with a few boundaries off the pacers, which prompted Mahendra Singh Dhoni to call his off-spinner. Ashwin came from round the wicket and pitched the first one outside the leg-stump and it held its line for a wide. And then, he went through his motions again!  However, what unfolded was something brilliant as the ball pitched outside leg and, turned the other way to castle Amla and shatter his woodwork. Adam Gilchrist, the former Australian wicketkeeper batsman, tweeted that it was the T20 ball of the century.

T20 Ball of the Century from Ashwin. #baffling #dhonisgotoman

With the words “ball of the century” coming into play, comparisons have been rife with Shane Warne’s legendary delivery to Mike Gatting at Old Trafford in 1993. Back then, Warne, a tyro leg-spinner, announced his arrival in Test cricket’s oldest rivalry, with an, initially, innocuous looking delivery pitching outside leg-stump. However, it spun a mile, bamboozling Gatting and crashing into his off-stump. Many people ask: Ashwin’s delivery to Amla was good, no doubt, but was it as brilliant as Warne’s?

Firstly, it isn’t a fair comparison here. The two deliveries came in different formats and against batsmen of different abilities, the surfaces of different natures. Warne was just a young gun there, trying to impress in the Ashes. It was a conventional piece of bowling, a proper leg-break that turned precociously and hence it captured the imagination of the public. In contrast, Ashwin’s delivery that stunned Amla wasn’t his conventional spinner as it turned the other way and plus came in T20 cricket. Warne’s delivery will always have an iconic status for two reasons. Firstly, it was conventional and secondly, it came in a Test match.

Keeping that aside, most people miss the most important point here. Gilchrist termed it “T20 ball of the century” and not the “ball of the century.” That in itself differentiates it from Warne’s magic. Secondly, let us talk about “century.” Warne’s delivery to Gatting, although only transpired about 21 years ago, was in the 20th century. Ashwin’s latest delivery came in the 21st and it could well be the ball of the century.

Nevertheless, Ashwin did a brilliant job to outfox Amla. Mind you, the South African is one of the toughest batsmen to fool in world cricket and the fact that he missed it by a long way shows how well Ashwin bowled. Keep the comparisons aside and kudos to Ashwin for this feat. 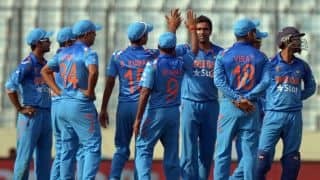