Another major strength of CSK is the ability of clutch players to step up when it most matters.

This hasn’t carried the resounding resurgence of 2010, when they roared back from the brink of elimination to clinch the title, but there’s something to be said about Chennai Super Kings’ (CSK) progression to their third IPL final.

They have proved their resilience time and again while coming back from defeats, and have yet again prided themselves on clinching the big moments. This season CSK got off to a slow start, winning two of their first five matches. No problem, they said, and put together four wins on the trot. One more defeat was followed by three straight wins, and CSK had moved from the middle of the league table into the top four and didn’t let their grasp slip.

Having been hammered by Chris Gayle and Royal Challengers Bangalore in their final league match, CSK faced RCB in the first Qualifier and stunned RCB with a memorable last-over win. They had been down and out for much of the match but never gave up. Chasing 12 and above over the last nine over of their chase, they refused to buckle. They found big overs, and the boundaries, to whittle away the target. As they so often have, CSK brought their biggest trait to the fore – the ability to play better cricket in tougher, bigger moments.

“It was a difficult target, but we have been in similar situations, and we have the belief that we can win these games,” said Mahendra Singh Dhoni after that thrilling win. “We believed that we could do it, but you can say I was not 100% confident. We know as a team we have the firepower to chase anything. This was a good scenario where the set batsmen kept on going, and the others chipped around him [Suresh Raina].”

An honest analysis. Another major strength of CSK is the ability of clutch players to step up when it most matters. Dhoni did it in Dharamsala last season in CSK’s final league match, one they needed to win to stay alive. In the semi-final, Doug Bollinger stepped up with four wickets to secure CSK a place in the final. On the big day, Raina came to the fore with the only half-century of the final. Against RCB on Tuesday, it was Raina who summoned all his experience and delivered a match-winning unbeaten 73. This is what CSK pride themselves on: the ability to get key players to play outstandingly in pressure situations.

But luck, as someone once said, is the residue of design. Dhoni will tell you that we all make our own luck, and that attitude plays a major role. CSK have worked hard to be where they are, and with the work the luck wouldn’t matter much.

More than any team – and surely if they win the IPL they will be the most successful Twenty20 side ever – CSK have made winning a habit and, through careful man management and an atmosphere of unity, built a model which other franchises should look to emulate. They reached the final in 2008, the semi-finals in 2009, and in 2010, having stared elimination in the face earlier in the tournament, CSK stunningly surged back to lift the title. They then won the Champions League Twenty20 in South Africa. Now they are in the final again.

There is something to be said about player retention. CSK retained their four best players and the franchise fought hard to repurchase the likes of Bollinger, Michael Hussey, Ravichandran Ashwin, Bollinger, Shadab Jakati and Subramaniam Badrinath from the auction pool. With a solid bunch of performers at their disposal, and the added advantage of familiarity among their ranks, CSK primed themselves for another good season. Teams like Delhi Daredevils could well learn from CSK’s thought process. How they allowed Gautam Gambhir to go is one of the more astounding achievements of a struggling franchise.

The bandwagon now heads south to Chennai, where CSK have yet to lose this season at home. It is as daunting a task as any to try and beat them at the MA Chidambaram Stadium. Whoever makes the final has a stiff task to not only beat the toughest side in the competition, but to do so in front of a throbbing sea of yellow. It is an unenviable situation to be in. The winning mantra that CSK, RCB and Mumbai Indians knew all along 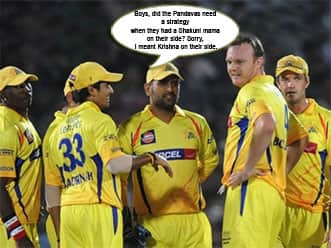 Conversations from the Mumbai Indians, RCB and CSK dressing rooms