Amongst the current crop of young and promising players in Pakistan, Usman Salahuddin is a name that is often mentioned as one who has the potential and the wherewithal to excel at international level. The 22-year-old right-handed batsman from Lahore has already played two ODIs for Pakistan against the West Indies and whilst he failed to impress in those games, he remains on the selectors' radar as a worthy candidate for a future recall to the team. 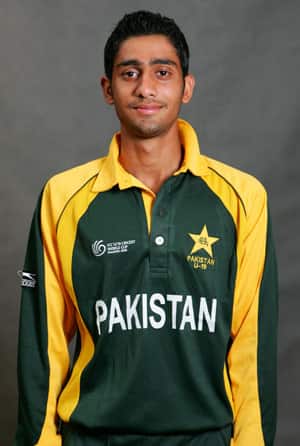 Amongst the current crop of young and promising players in Pakistan, Usman Salahuddin is a name that is often mentioned as one who has the potential and the wherewithal to excel at international level. The 22-year-old right-handed batsman from Lahore has already played two ODIs for Pakistan against the West Indies and whilst he failed to impress in those games, he remains on the selectors’ radar as a worthy candidate for a future recall to the team.

With a First-Class average of 47.4 composed from an impressive 13 centuries and 20 fifties and an equally outstanding List A average of 36.85 to his name, there is little doubt about his skill level. As he recently kicked off a potentially successful season in the President’s Trophy with his latest employer, Khan Research Laboratories (KRL), the young batsman spoke exclusively to PakPassion.net about his domestic form, his performance with the Pakistan Under23 team and his aspirations to earn a recall in the national side.

Usman began with an introspective look at his association with the Habib Bank team and spoke about the positives from his stay with the team and in specific about what he learnt from Younis Khan and also shed some light on the reasons for his move to KRL.

“I had a disappointing season at Habib Bank last year. It was tough as there were so many international players there and I was in and out of the side and at times batting at number seven which wasn’t ideal. However I learnt a lot from my season at Habib Bank, where I had the opportunity to work with the likes of Younis Khan which was fantastic and something that will no doubt benefit me for the future. KRL expressed an interest in signing me as they had done at the start of my first-class career and I thought it was the right move for me at this stage. I hope to establish myself at KRL and help them do well this domestic season.”

In recent times, Shan Masood and Sohaib Maqsood have become shining examples of how the selectors are willing to reward hard work at the domestic level. This is a fact which is of great importance to Usman and a goal that he is working at achieving.

“A new domestic season is always an exciting time for all First-Class cricketers and it provides everyone with a clean slate to perform and get noticed by the national selectors. There are always places up for grabs in the international set up and we are all in the same boat — i.e. to make runs, take wickets — You never know when your chance may come! There’s a good blend of experience at KRL and I’ve settled in well. I believe that I’ve made a decent start for KRL as I scored 62 not out in the second innings in the President’s Trophy against PTV which we won by six wickets. It’s always good to make some runs in your first match for a new team and I hope it provides me with a platform for a successful domestic season.”

Expectations were high for the Pakistan Under-23 squad that took part in the Asian Cricket Council Emerging Teams Cup held in Singapore. Pakistan were led by international all-rounder Hammad Azam and featured some promising young talent in the shape of Umar Waheed, Babar Azam, Raza Hasan, Usman Qadir and Usman Salahuddin. Whilst the Pakistan team failed to beat arch-rivals India in the final, Usman feels that participation in such a high profile tournament did a world of good for the young players and is a template that the PCB should follow for the future.

“I performed quite well in Singapore earlier this year for Pakistan Under-23s in difficult conditions and it was a good experience for all of the Pakistani boys to take part in such a competition. The more tournaments like that and “A” tours that we can take part in, the more it will help in preparing young players for international cricket.”

Selection for the tour of the West Indies by Pakistan in 2011 provided Usman with the ideal platform to raise his profile and the two ODI games that he played were a solemn recognition of his skills by the Pakistan think tank. As it transpired, due to the prevalent match situation he played just 28 balls in total and scored 13 runs which he feels did not do justice to his talent.

“My international chances so far have been very limited, in fact you could hardly call it a chance. A few deliveries here and there isn’t really enough to show what you can do. Hopefully I can impress the selectors this season with volume of runs. I’m definitely targeting the Test series against Sri Lanka in the UAE.”

The thorny question of the right balance of youth and experience in an international team is one that is at the heart of many discussions on the makeup of the national team. Usman, like many other younger players is of the opinion that young talent needs to be recognised and given a chance to represent the nation at the international level, and that persisting with younger players as they come up the curve is the only way forward for Pakistan.