New South Wales ended the first day at 462 for six and finished their mammoth innings at 640.

November 18, 1899. Victor Trumper struck 208 for New South Wales (NSW) against Queensland, showing yet another facet of his immense genius. Arunabha Sengupta looks back at the innings which captured the imagination of the Australians even though the hot topic of the day was the Boer War.

The Return of the Heroes

The backdrop was of flashing gunfire when Victor Trumper sailed on board the Oruba back to the Australia after the victorious tour of England.

The Boers had just invaded Natal, the attack on Ladysmith was just weeks away. The British had retired to Mafeking and the Australian colonies were charged up in patriotic fervour.

Across the great land people devoured the reports from the front line. One such was from England wicketkeeper Dick Lilley: “A company of the Coldstream Guards was ordered in Lord Methuen’s first battle to storm one of the kopjes held by the Boers. The advance had just been sounded when a shell came from the enemy, and without bursting buried itself in the earth close to the men. The one nearest to where it dropped looked across at his neighbour and said, ‘If I had got my bat here, I’d have hit that beauty for six.’”

But, in spite of the growing shadow of War, Trumper, Syd Gregory, Frank Iredale and Bill Howell, the four on board the ship, were given a rousing reception. When the Oruba sailed through Sydney Heads early on a Saturday morning, the executive officers and several delegates of the New South Wales Cricket Association boarded a launch and met the steamer well away from the shores to greet the Ashes winners.

A great welcome was arranged at the Australia Hotel. George Houston Reid, the president of the Association and future Prime Minister of Australia, hailed the excellent performance in a speech frequently interrupted by loud cheers.

The biggest hero of the hour was 22-year-old Trumper. The tour of England had seen him blossom into the most delightful batsman to ever draw breath. The manner and style of his runs had not been approached even remotely by anyone before him.

According to Iredale, “When he [Trumper] came forth into the cricket firmament and played his game, no one knew what to think. Old canons of the game were broken, and new ideas were submitted by this mere stripling of a lad. Old players gasped with astonishment at the extraordinary strokes he made, and the seeming indifference to either the bowling or the field.”

By the time Jim Kelley and Monty Noble arrived in Sydney on the Ormuz, Trumper was already in action for the Metropolitan Eleven versus the Country Thirteen, scoring a powerful 116.

For the month after that, the siege of Kimberley and the assault on Ladysmith dominated the newsprint. The Australian public followed the developments in South Africa with great intensity. Yet, when Queensland played New South Wales at the Sydney Cricket Ground on November 17, 1899, many flocked to watch in spite of the poor weather. The conditions were not fit for cricket till the morrow and on Saturday, November 18, Jim Kelley won the toss and elected to bat.

It was a depleted New South Wales side. Syd Gregory and Iredale had been victims of influenza and Howell was at his farm, recovering from a leg injury sustained in England. The start was not too encouraging either, with Noble trapped leg before for 15.

Trumper walked in at 32 for one to join Harry Donnan.

It was the same dashing knight that greeted the enthralled spectators, but with an added dimension to his art. Always a thing of beauty at the crease, his style had been enhanced with the lofted stroke.

The bowling, no means a ragtag unit, was made to look like one. Strokes flowed on all sides, several lofted into the outfield. In the 45 minutes to lunch, the two added 52.

On resumption, Trumper briskly reached his half century. There ensued a healthy race for the individual centuries between the two batsmen. Donnan was on 98 when Trumper faced the bowling with 96 to his name. And he pierced the off-field with another of those magnificent off-drives to beat his partner to the three figure mark.

And after his hundred he opened up even more. Some of his high hits landed in the cycling tracks beyond the ground.  One pitched on the southern end of the stands near the scoreboard.

When Donnan fell for 113, Trumper was already on 145. He kept on scoring undeterred, flowing along to his double hundred with a mindboggling combination of serene ease and destructive results.

After three hours and five minutes of visual and aural delight, he skied one to long off and departed for 208. It was a masterpiece brought about in the style of a wondrous whirlwind.

New South Wales ended the first day at 462 for six and finished their mammoth innings at 640. They followed it up by dismissing the visitors for 154 and 171. Trumper bowled seven overs of medium pace in the second innings and took two for 12.

On November 20, the third day of the match, Sydney Morning Herald effused, “His [Trumper’s] style is if anything more attractive than before he went to England, simply because it is more vigorous, but where he used to keep the ball, well on the ground, he now lifts it and consequently takes risks. He is now a most pronounced hitter.”

It was a new dimension to his genius, resulting in considerable inches in the day’s newspapers in spite of the Boer War. Pakistan vs New Zealand 2014: Can the Black Caps do justice to their potential while playing in subcontinent? 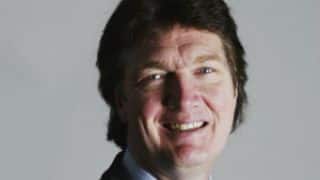