January 10, 1911. Victor Trumper stroked the ball with sublime grace as he brought up his highest score in Test cricket.  Arunabha Sengupta  writes about the scintillating innings that had the public, press and even the opponents shaking their heads in admiration.

The googly brigade in Trumperland

Excitement ran high in the cricketing circles of Australia as for the first time a South African cricket team landed on the shores of the great land. The reputation of the four great googly bowlers had preceded them, and their arrival was awaited with bated breath.

Gordon White was unavailable, but the other three did tour. Ernie Vogler, Reggie Schwarz  and the great Aubrey Faulkner disembarked in their quest of conquering Australia. A year earlier, the quartet had humbled a strong English side, 3-2 at home. But now they had their task cut out.

The hosts were a mighty cricketing nation, with a plethora of great names in their ranks. And there was a belief that the googly bowlers would not be able to turn the balls on the billiard-table pitches.

However, such speculations were proved wrong from the first game. Schwarz claimed 11 wickets as South Australia were overcome by 281 runs. “Their off-breaks were as big as any we have seen since the days of (Tom) McKibbin,” wrote Australian selector Frank Iredale. But he also added, “Of course so far as their success or failure against our players is concerned, it must not be forgotten that they (have) to open against two of the finest batsmen in the world, who have always shown the ability to play any bowling.”

The two batsmen referred to were Warren Bardsley and Victor Trumper.

However, things had not been quite bright for the dashing knight of Australian batsmanship — the incomparable Trumper. Since his great home series against England in 1903-04, the next 15 Ashes Tests at home and away had not been really successful. And while people continued to flock to watch him essay those magical strokes, his First-Class cricket returns had not been that fascinating either.

Leading New South Wales against the tourists, Trumper started off well, scoring 70 and 78 in a thrilling three-wicket win. But in the first Test at Sydney, he was run out for 27.

The South Africans, however had no respite in spite of the early dismissal of the supreme batsman. Bardsley held firm and was followed by Clem Hill, Warwick Armstrong, Vernon Ransford, Chris Kelleway and Charlie McCartney. Australia piled up 528 and won by an innings with Tibby Cotter and Bill Whitty running through the batting of the visitors.

To add to the woes of the visitors, it was around this time that Vogler developed a fondness for the bottle and was not of much use for the rest of the tour.

The return of the genius

At Melbourne, Sid Pegler bowled Trumper for 34 in the first innings. But in the second innings the flash of the genius finally sparked off into a display of the grandest strokeplay.

Faulkner had scored 204 to take South Africa to 506, ensuring a lead of 158. As Australia batted again, wickets fell around Trumper, with defeat looming large, almost inevitable. The leg-spinners toiled on, tying most of the line-up into uncomfortable knots.

However, from the beginning, the champion was in his element. His late cuts flowed magnificently, and anything short was dispatched to the mid-wicket fence. Five men stood in an ark for Schwarz between the wicketkeeper and cover. Trumper pierced the almost non-existent gaps with his flashing sword of a bat.

And then Faulkner’s ball kept low, and squeezed under the late-cut to find the stumps. He walked back for 159, and scored from just 172 balls in 171 minutes. “Trumper is still the same old Victor, the brightest star in the cricketing firmament,” wrote Sydney Morning Herald.

In the end South Africa needed 170, and fell away for 89 to Cotter and Whitty. The hero was back, the wand like willow turning the most certain of defeats to victory. Even far away in the English winter, newspaper headlines screamed, “Trumper Victorious”, “Trumper Again” or just “Trumper”.

On January 7 began the Adelaide Test. Hill lost the toss and the visitors batted, piling up an impressive 482.

For the hosts, Kelleway opened with McCartney in an experiment. Australia were 111 for 3 on the third morning, when Trumper walked out to bat amidst tremendous applause. Charlie Llewellyn, the slow medium left-armer, had dismissed the openers and Ransford, conceding just 15.

But, Trumper and Bardsley batted freely, stealing sharp singles to begin with. They went in to lunch at 141 for 3, Trumper on 11.

The genius started off after lunch with a straight drive off the giant medium-pacer, Jimmy Sinclair. The stroke went past the outstretched hand of the bowler, along Adelaide Oval’s long, long outfield, and the batsmen ran four by the time someone ran down and retrieved the ball. Off the next over from Sinclair, Trumper pulled two consecutive balls into the cycle track lying beyond the outfield.

On came Faulkner from the river end, and Trumper’s flashing blade late cut him for a boundary. An elegance oozing off-drive took him to fifty in only 30 minutes.

Amongst the spectators that day sat a young AG Moyes, who later reflected in Australian Batsmen, “I was a schoolboy at Adelaide at that time, saw the innings, can still picture the majesty of it all, the amazing range of strokes, the footwork, the certainty with which he beat the field, finding gaps, forcing changes in the field and then hitting the ball into the open space just created. This was perfection of cricket, the Master creating a masterpiece for all time, for eternity.”

Trumper cut Sinclair for four and then drove him down the ground for three to get into his sixties. Dave Nourse swung the ball prodigiously, trapping Bardsley leg before with a huge in-swinger, but Trumper continued in his merry manner. He was by now glancing the incoming balls to fine leg under his upraised left leg, a stroke of daring and invention that only he could essay.

He called it the ‘yorker shot’, and he could lift either leg while playing it. Alf Jones, former Sheffield Shield and Test umpire, had told EW Kann of Sydney Sun, that Trumper could play the stroke under either leg depending upon the direction and trajectory of the ball, usually to a yorker on the leg stump. Sir Hector Clayton once related how Trumper had practised the stroke for three months while coaching schoolboys at the Sydney Grammar School. Only after thorough mastery did he include it in his repertoire.

A series of straight drives off Faulkner now put umpire Bob Crockett in serious physical danger and took Trumper into the nineties. As captain Hill watched from the other end, Trumper struck another flamboyant drive off Faulkner to bring up his century. At tea he was on 109. A sublime 98 runs had flowed through the session.

During the interval, scorer Bill Ferguson heard Llewellyn gently rebuke Pegler, “What are you playing at Syd? Isn’t it time you removed Victor for good?” The bowler gravely replied, “I have never bowled any better in my life, but he seems to make me put the ball exactly where he wants.”

“Victor will get himself out when he is ready”

After the break, Trumper jumped out to Schwarz and Llewellyn repeatedly, without a care about the possible stumping. The lethal Schwarz was chuffed. He turned to his captain, Percy Sherwell behind the stumps and exclaimed, “It’s no use. I just can’t bowl to him.” The skipper demanded, “You’re not trying to get him out, are you?” The bemused Schwarz replied, “Yes, of course, Percy, what do you think I’m trying to do?” The wise Sherwell advised, “Forget it. Victor will get himself out when he is ready.”

Hill struck out at Schwarz and was caught in the outfield. And as Armstrong joined him, Trumper reached 150 in less than 3 hours.

After Sinclair bowled the big Melbourne character, Sammy Carter came in. Trumper continued unperturbed. Pegler was driven to the long-on fence and then lofted on to the cycle track. The very next ball was late-cut to the pickets. Australia were past 400.

A fascinated Carter tried to emulate the genius of his partner and paid the price. Tibby Cotter now came in to join the fun at the other end. And Trumper glanced Schwarz to the boundary to take his score to 192. And just as the clock approached six o’clock, another delightful boundary made him just the fifth batsman in Test cricket to get to a double hundred.

The following day the Sydney Morning Herald wrote: “To the mathematician it may be of interest to know that Trumper scored 208 not out, that he batted for very nearly four hours, that 25 boundaries punctuated his figures, and that not one single chance marred the symmetry of exhibition; but the cricket enthusiast likes to know that it was a graceful and brilliant exposition of the national game. Trumper took length balls on the off peg and hooked them to the leg boundary. He forgot that the best wicket-keeper of the world was crouching behind him, and drove fast and slows indiscriminately. Off-theory that the cautious tyro leaves alone, Trumper tackled vigorously, and cut and drove hot-footed to the railings … one after another the champion bowlers of Africa came up to the scratch, each time to be repulsed disastrously…one after another they retired baffled, but the ‘Incomparable’ went on as if forever…when six o’clock mercifully gave respite to the poor trundlers, the crowd rushed to the ground, and Trumper fought his way to the pavilion amidst a seething and cheering multitude.”

After the great innings, Trumper simply returned to his hotel, enjoyed a hot bath, and a leisurely meal before retiring early.

The following morning he was stranded without partners. Australia ended their innings at 465, with Trumper unbeaten on 214 — the first unbeaten double century in the history of Test cricket. The runs had come in just over four hours, off 247 balls, with 26 hits to the boundary.

According to the Adelaide Advertiser: “During his innings he gave not a single chance … his had been one of the most brilliant exhibitions ever seen at the Adelaide Oval.”

The South Africans batted with great spirit, scoring heavily in the second innings. The magnificent Faulkner notched up another century. The target for Australia was 378.

Setting out on the afternoon of the fifth day, the home side gave thrilling chase. Trumper, opening yet again, was bowled by Llewellyn for 28. Schwarz put in another great effort with the ball. Bardsley, Hill, Kelleway and Armstrong fought hard. In the end the visitors won by 38 runs on the sixth afternoon.

In the following Test at Melbourne, a swarthy complexioned dentist from North Sydney made his debut, bowling with uncanny flight and control of googly and top spin. Dr HV ‘Ranji’ Hordern captured eight wickets in the game and Trumper scored 87 in the second innings in a massive 530-run win.

Hordern was again among the wickets in the final Test at Sydney and Trumper remained unbeaten on 74 as Australia won the fifth Test by 7 wickets to clinch the series 4-1. 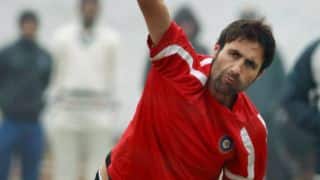 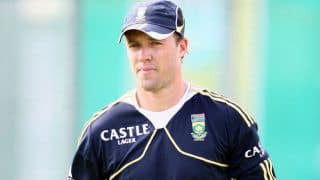