The very first time he celebrated like that was with wicketkeeper KL Rahul, but this time, he celebrated David Warner's wicket by moving with his skipper Virat Kohli.

Royal Challengers Bangalore (RCB) chinaman bowler — Tabraiz Shamsi is name, which is quite often heard these days. His hilarious ‘BUS DRIVER’ celebration is definitely interesting but he is equally effective with the leather. He was first seen doing this unique celebration during Caribbean Premier League of 2015 and it has now become a trend in the ninth edition of Indian Premier League (IPL) too.

The very first time when he did in this IPL, he was joined by wicketkeeper KL Rahul but this time, Shamsi was seen celebrating with none other than his skipper Virat Kohli after taking the big wicket of Sunrisers Hyderabad captain David Warner. SRH led by Warner were belting the RCB bowlers. Warner was close to his hundred when Shamsi got the better of him when he was caught at long-off by AB de Villiers. This big wicket was followed with Shamsi’s funny celebration which is going to be remembered as one of the iconic moments of this season of IPL. Watch and enjoy the celebration here: 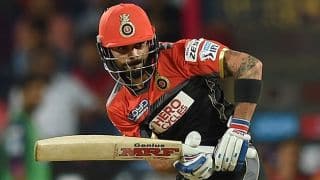