If Richards and Tendulkar (and much later, AB) made limited-overs cricket what it is, Kohli is on his voyage to become the greatest ODI batsman.

February 28, 2012. Sri Lanka posted 320 against India at Hobart. India needed to finish the chase in 40 overs to stay in contention of qualifying for the final of the tri-series. Sachin Tendulkar, Virender Sehwag and Gautam Gambhir provided a solid platform, and Virat Kohli walked out at No. 4. India were 86 for 2 in the 10th over. By now he had established himself as a very good ODI batsman but this was his leap to the next level. This was Kohli s Sharjah-moment of Tendulkar.

Lasith Malinga, Nuwan Kulasekara, Thisara Perera and Rangana Herath were subjected to some brutal assaults. Rated as one of the finest in limited-overs cricket, Malinga finished with 7.4-0-96-1. There was the pull if he pitched short and inside-out hoicks if he over-pitched but perhaps more telling was Kohli s sublime wristwork when Malinga unleashed those yorkers that have felled many around the globe.

Free airtimes in the television news have been infested with comparisons between Tendulkar and Kohli since then. They borderline on conclusions: Kohli is a greater ODI batsman than Tendulkar. Viv Richards, arguably the best batsman in ODI history, says that he sees a lot of himself in Kohli and is a self-proclaimed fan of the Indian captain, thus adding more fuel to the topic.

However, Kohli is not the only contender to the throne currently owned by Richards and perhaps Tendulkar. Let us add the other two modern ODI champion-batters of this era AB de Villiers and Hashim Amla to the mix.

The last three in the list are active international players. Of them, Amla has phenomenal numbers. Amla scores a hundred every 6.2 innings, better than even Kohli s 6.8. For perspective, the corresponding numbers for de Villiers and Tendulkar are 9.3 and 9.4 respectively.

In fact, Amla goes past the fifty-mark in every alternate innings (156 innings, 78 fifties). Unfortunately, it is doubtful whether Amla or de Villiers will extend their careers beyond the 2019 World Cup; even if they do, Kohli will almost certainly outlast them.

Kohli is a mere 28. He doesn t seem to look for tons. He somehow gets them with ridiculous ease. In ODI cricket, it seems he controls matches better than anyone else.

Tendulkar s 49 ODI tons are considered sacred, a number that cannot be practically touched. You cannot blame fans for placing the number on a pedestal that high. After all, second person in the list is a certain Ricky Ponting, who has 30 ODI tons.

Tendulkar registered 21 ODI hundreds after he turned 28. He overcame a tennis elbow, a back injury, a broken toe, fiery bowlers and a plethora of expectations. After turning 28, Kohli has scored 2 ODI centuries from the 14 games he has played.

Injuries have seldom bothered Kohli. He is among the fittest athletes in the globe. Based on numbers of last 5 years, on an average he plays over 22 ODIs every year, and along with the hoards of 80s and 90s, he also gets 3.5 hundreds a year at an average.

Kohli has just hit his peak years. He is already hailed among the ODI greats. Assuming there is a slight dip in his form and he plays 20 ODIs a year and registers 3 tons on an average, he will have 49 ODI tons to his name by the time he turns 36.

In other words, he will do that at an age younger than what MS Dhoni, Yuvraj Singh and Gautam Gambhir are now. To add to the list, Kumar Sangakkara was 37 when he smashed 4 consecutive hundreds in the 2015 World Cup.

But that is not the only Tendulkar record Kohli will break by then. Let us look at a few others.

– Tendulkar has breached the 1,000-run mark in a calendar year 7 times. In less than half the number of games, Kohli is on his way to register the landmark for the fifth time. By 36 Kohli will have pocketed this record.

– Tendulkar reached the much-coveted 10,000-run mark in his 266th ODI. If Kohli continues at the same rate, he shall get there in his 227th ODI, i.e. almost 40 fewer than Tendulkar.

No comparison on greatness parameter

Decades back, there walked on this planet a man with an intimidating willow and unmatched swagger. He chewed gum with such disdain that bowlers could not help but get intimidated.

He played the best of bowlers without a helmet. He pulled them with a smile, drove them with an attitude as if he was showing them their place. They called him King Viv for a reason.

Then arrived a little man whose aggression matched that of Richards, his idol. He adopted a different mechanism to deal with things. Sledge him. Beat his edge. He would walk quietly to the square-leg before resuming his innings, responding with his willow. With a near-perfect technique, Tendulkar was Michelangelo at the crease. Give him glass, give him canvas, give him the rocks, he would mould it with his craft.

There have been greater cricketers, but Sachin Tendulkar was the sport itself. He inspired the generation that followed.

Kohli feels embarrassed to be compared to his idol. A bottom-hand player who likes to flick the bat in his hand before every ball, Kohli might not have played the quality of cricket a Richards or a Tendulkar may have.

But in the age of fitness, constant media glare and tremendous performance pressure against media and social media, Kohli has set different standards.

If Richards and Tendulkar (and much later, AB) made limited-overs cricket what it is, Kohli is on his voyage to become the greatest ODI batsman. 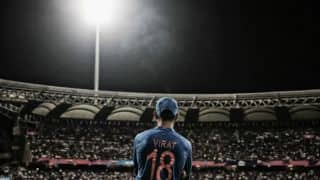