When the Little Master waxed eloquent on air, as Virat Kohli was sculpting his 183 in a winning chase, he was only articulating the emotion coursing through India, and finding voice in self-laudatory tweets and Facebook updates from a people who’ve found their messiah, and were doubly chuffed because they’d seen it coming. 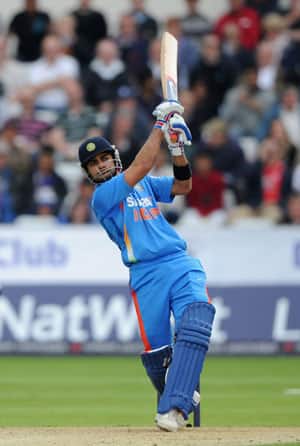 Virat Kohli should understand that he is just clay, shaped and moulded by the popular imagination into a form of demi-divinity. And when the festivities are over, the same devotees will take him lovingly for a burial at sea, and await the next god in the following season © Getty Images

“I have seen the face of India’s batting future…and his name is Virat Kohli!”  – Sunil Gavaskar

When the Little Master waxed eloquent on air, as Virat Kohli was sculpting his 183 in a winning chase, he was only articulating the emotion coursing through India, and finding voice in self-laudatory tweets and Facebook updates from a people who’ve found their messiah, and were doubly chuffed because they’d seen it coming. Most of Kohli’s tons came in winning causes, they said…an unsubtle wink and nudge at the newly-coiffured ‘hundred-hundreds’ man, who, they feel can learn from the tyro and bat ‘for the team’ and not himself.  And they glowed in the reflected lights of success because – trawl the social networks to know what I’m talking about – they’d always known Kohli was the ‘it’ boy!

My foot! What Gavaskar unwittingly underlined in bold, was actually an articulation of the sheer fickleness of public sentiment, given that the same commentator – and the selfsame Facebook prophets – had denounced Kohli as a false god less than two months back. Rewind to the first few Tests on Aussie soil, and the multitudinous catcalls and cries of anguish as Kohli was selected ‘yet again’ thereby denying the ‘supremely talented’ Rohit Sharma a place in the eleven. From the commentator’s box to the social network pulpits, the air was redolent with censure for Kohli and his immature expressions of cringe-worthy petulance.

As a nation, we all indulged in a mass self-flagellation to let the world know we didn’t condone such behaviour, especially from someone who hadn’t pulled his weight with his willow, and owed his continuing selection to Dhoni’s favour. Dhoni may have cried himself hoarse that Kohli was the future and he saw a very special talent that should be allowed to fail before it flowered. But did we listen? No! Instead we threw rotten eggs at him and imputed darker motives and vested interests, or at the least, sheer cussedness in continuing to go with a self-destructive talent who didn’t deserve his place. After all we had enough Nostradamuses in the form of ex-players who were openly saying what we already knew, and thus gave legitimacy to our proletarian angst.

And then came the fourth Test in Adelaide, where Kohli was once again chosen by Dhoni: a selection which confounded us, as it seemed a rebellious action bordering on the treasonable, going, as it was, against the combined wisdom of a billion selectors.

Kohli redeemed himself and vindicated his captain’s faith with a classy century. But we still lost. And the sullen silence of the masses grudgingly gave way to muted applause, for it smacked of those false dawns that only flattered to deceive. But in the absence of anything else deserving of our support, we were able to give the young man a few handclaps whilst muttering under our breaths (amplified as stage whispers on social networks) of another Indian batsman who’s scored a ton to save his career, and would now sit on his arse for another six innings.

What Kohli did after that was, however, a complete departure from the script; he actually grew in confidence, and started scoring heavily in the ODI tri-series, in the company of his skipper, who was easily the best Indian batsman across the tournament. And every time Kohli swaggered out and settled with steely eye and flashing blade to construct an innings and impose himself on the game, he was poking with increasing temerity at the well-inflated balloon of our collective expectation of failure; a balloon we blew up, in the first place, to insulate us from the vagaries of the gods we’d installed in our puja ghars.

As he continued to confound the critics and use his own performances as ballast to move into a different orbit, a lot of us were getting ready with the puja flowers and tilak to anoint him the successor to a fading pantheon of gods whose ‘use-by’ date was rapidly approaching. By the time he took on and demolished our arch asuras from across the border, the legend of Virat Kohli was well and truly being sculpted, and his success ‘owned’ by all of us who always knew ‘it was a matter of time’, notwithstanding the fact that this sentiment sounded very close to what a certain wicketkeeper-captain had said two months back: another demi-god, who, in the fashion of what we do with our Ganesha idols after every Ganapathi Puja, is being led away to be immersed and forgotten after being feted and worshipped in a frenzy of mass adulation just a short while back.

Young Kohli would do well to read this story and learn the lessons; understand that he too is just clay, shaped and moulded by the popular imagination into a form of demi-divinity, and when the festivities are over, the same devotees will take him lovingly for a burial at sea, and await the next god in the following season. Even as he basks in the glow of owning a billion hearts, he should realise he’s actually owned by them, and that they are the men who know all; who know he always had it in him, and who’ll be very voluble about the fact that he never did, after a few failures.

What he’ll also realise – if only he uses the ‘scroll’ button on his i-pad – while on Facebook or Twitter, is that in our land, failure is an orphan, while success has a billion fathers!

(Rajesh is a former fast bowler who believes he could have been the answer to India’s long prayer for an ‘express’ paceman. He regularly clocked speeds hovering in the late 80’s and occasionally let fly deliveries that touched the 90’s. Unfortunately for him, the selectors were talking ‘mph’, while he was operating in the metric lane with ‘kmph’. But he moved on from that massive disappointment which resulted from what he termed a ‘miscommunication’, and became a communications professional. After a long innings in advertising as a Creative Director, he co-founded a brand consulting firm called Contrabrand. He lives in Chennai and drives down to work in Bangalore…an arrangement that he finds less time consuming and stressful than getting from one end of Bangalore to the other.)