Anushka’s threat seems to have had its desired effect.

Virat Kohli’s golden duck in the second innings of the Lord’s Test may have been the last straw for his beau. A highly disappointed Anushka Sharma has threatened to have yet another lip job done and, to rub it in, appear on Koffee with Karan after that if Virat doesn’t find form with the bat soon.

“Believe me, I’m as disappointed with Virat as any other cricket fan, yaa,” Anushka fretted to The UnReal Times. “You think I get a kick out of trending for all the wrong reasons every time Virat flops with the bat? I decided enough was enough and something had to be done about it. Now the prospect of jokes about another lip job of mine trending on Twitter should give Virat the jitters and keep him on top his game.”

Anushka’s threat seems to have had its desired effect. The pugnacious Delhi lad hit the nets immediately and gave the red cherry the full treatment, mouthing expletives while at it. “He seems to be getting back to being his old angry self. If the string of expletives is an indication, he should be back among the runs,” a member of the Indian cricket team revealed on condition of anonymity.

Ace commentator Ravi Shastri felt Anushka’s threat was just what the doctor ordered. “If this threat works, and Virat scores, that’s great. If Virat flops and Anushka goes ahead with her threat, then I don’t see Virat hanging around her any longer. So, either way, in the end, cricket will be the winner,” the 1984 Champion of Champions intoned. 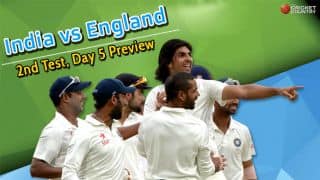