Virat Kohli has been taking giant strides in international cricket.

Virat Kohli has been taking giant strides in international cricket. Abhishek Mukherjee looks at an almost unnoticed record for the man who has been hailed as one of the potential all-time greats by several gurus.

There are orthodox cricket pundits who are not impressed with Virat Kohli’s on-field antics. This columnist, a traditionalist to the core, especially when it comes to cricket, had raised an eyebrow when news of his discipline used to come in. With time, scepticism gave way to awe as Kohli took gigantic strides across all formats.

To start with, Kohli has the highest batting average among all batsmen with 500 Twenty20 International (T20I) runs, significantly ahead of Aaron Finch, the next man on the list:

Having already dominated Tests and One-Day Internationals (ODIs), Kohli has now taken to T20Is. In fact, at the time of writing this article, Kohli is the only man to be averaging over 45 in all three formats of the sport. Since it is evident from the above table that nobody barring Kohli has averaged over 45 in T20Is, let us lower the bar to 250 runs.

Only seven men have averaged over 35 and scored 250 in all three formats; of them, Mathew Hayden has crossed the forty-mark in all, but Kohli has gone a notch ahead, going past the 45-mark in all formats.

This versatile quality has also an impact on the Reliance ICC Player Rankings, making Kohli the only batsman to rank in the top ten across formats:

As is evident, though there are five men (de Villiers, Sangakkara, Amla, Warner, and Misbah) who appear on two of the three lists, Kohli is the only one to feature on all three. 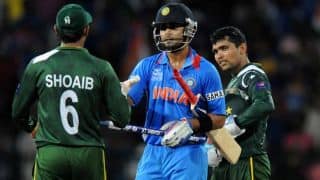