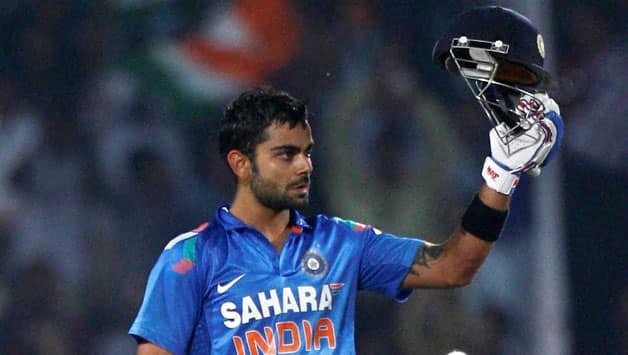 “Maybe we need someone from the crowd to throw things at him like they do at our blokes. That might be a good start.”

This is what Australian captain George Bailey had to say when asked about ways to stop Virat Kohli after his unbeaten 115 guided India to yet another mountain-chasing victory here on Wednesday. Going by his current form, there might really be no other way.

Easily India’s most prolific batsman over the last two years in the shorter format, Kohli’s latest ton has proven that he has taken his batting to a different level almost blemish-free.

Like in Jaipur, where he ensured India chased 360 with ease, Kohli came out on Wednesday knowing he had to up the ante with India going at under six till the 30th over.

Not that it bothered the Delhi lad, he came out looking like he had been batting for two days straight, and with a combination of drives, cuts, flicks, sweeps and even slog-sweeps, he raced to his 50 in just 31 balls to get the total up to 267/2 in 40 overs (the scoring rate now above 6.5).

“Once Shikhar [Dhawan] got out, I took over and it was important to finish the game. The plan was to play out Mitchell Johnson, we knew he was going for wickets. I always plan my game,” Kohli said after his match-winning effort.

Plan his game he sure does, for then came the killer blow against Australia’s main weapon. It was the 41st over, and Johnson was getting some movement out of the pitch with the old ball, and for that brief period, was looking dangerous.

Kohli produced two moments of scintillating strokeplay – first to rock back and swat the ball through mid-wicket for a four, and second a solid pull for the same result. Those two strokes made it clear that he would win it for India again. It became three in three when he got an outside edge trying to go for another one.

“He has grown as a player. He is someone who is very confident, who loves playing and loves performing. Especially, if you look at this game, he made it look easy. It got difficult at the end with the ball reversing a bit. But he still batted with ease, which was fantastic,” skipper MS Dhoni said after the game.

Another aspect the skipper stressed on, and something that been Kohli’s undoing a few times, was his hot-headedness.

“He has got aggression, which he has to control. And he is doing that brilliantly, channelising and using it for the benefit of his talent and the team,” Dhoni said.

So despite Shane Watson having a lot of things to say to him during the chase, Kohli didn’t lose his cool. Not once did he look like getting out playing a rash shot, something Kohli was earlier prone to. He gave it back to Watson with his words, but never let it affect his batting.

This is a new Kohli on display. His talent and strokeplay has always been top class, but his temperament was susceptible. However, with a majority of his centuries (11 out of 17) coming during successful run chases, he seems to have gotten the best of both worlds.

And maybe, no matter how much Bailey would like it to happen, not even an unruly crowd can stop this man in his current form.