Two phases create two completely contrasting images in one’s mind when he thinks about Virat Kohli during India‘s horrendous tour of England in 2014, and, Virat Kohli in 2016. In the earlier one, Kohli struggles on all fronts, falls prey on similar deliveries bowled in the channel of uncertainty, drawing the batsman forward but moving away from him. In the second one, Kohli is someone the bowlers dread to bowl to, as they do not have any way to stop him. It all has happened within a couple of years, that Kohli, who was reduced to an ordinary figure in England in 2014, has now slammed 4 centuries within a month’s time. Kohli did face a lot of issues, but he worked hard on them to iron out the flaws as well. And that is more important. READ: Virat Kohli continues to defy reality in IPL 2016

James Anderson had found his perfect bunny. Dismissing seven times in the tour, he had exposed India’s next cricketing superstar completely. It looked like a déjà vu in every innings as he would misjudge the line of the ball if it had turned outside off-stump, even a little bit. From the most powerful bowlers to the gully cricket players, everyone was made aware of the fact that The batsman, who had all the backing of the great Sachin Tendulkar and even a few prophecies coming from the batting legend, was definitely not in the right frame of mind.

But he pulled himself out of the situation. The first notable step he took was to learn to duck the balls. One of the most aggressive players, Kohli must have had a tough time to learn the art of letting a delivery go untouched. Though runs are required on the board, it is wise to respect the deliveries one is unsure of and not attempting them was a better option — the learner Kohli had understood.

A quality, such as being proactive, always comes with pros and cons. While being proactive helped him literally sneak runs out of a probable dot ball, it also harmed in a few ways. His habit of losing concentration from the ball, its release point let him with lesser reaction time. Quite prominently, Kohli used to run his eyes around to check the field placements one last time even after the bowler’s run up was a long way through.

Lack of decision making was one huge factor working behind Kohli’s back to back dismissals. Unsure of the delivery, how it will turn and how much he needs to open his bat to defend and not to edge the ball and reflex action — these all were the regions Kohli needed to work and he did.

Another habit of Kohli, though remained majorly unnoticed, changed over the time for good. It is always necessary for a batsman to fixate his gaze at the bowler’s hand. Kohli, however, used to have an unusual head movement. Rather than fixing it or keeping it steady at a certain point, his head used to bounce continuously as he kept on adjusting himself at the crease.

To talk about the technical parts, Kohli did a lot to improve his footwork which looks completely majestic. Then he had his array of shots but once it was a delivery he was not comfortable to play, he would not play them. Moving his feet, making room, Kohli now has enough space to expand and complete the follow-through which brings him closer to perfection day after day.

The last department he had to work with was his confidence. It is not easy to hit back after being defeated so badly and repeatedly but mental strength is something that Kohli had mastered even before entering the international arena. There was no fear in his eyes, no anxiety as he improved himself and it was a brand new Kohli. He could now attack the bowler’s mind, read what he would think and do with the next delivery and act accordingly. His head movement is under his own control now and not random. Eyes stuck on the ball which helps in precision timing, picking the gap before the stance and the last check before the bowler’s run up. All of these worked along Kohli’s already steady follow-through. He understands his game a lot more now, has answer to every delivery that the bowler could come up with. Improvisation that the bowlers think of, he thinks before them and acts wisely. He has set new heights for an Indian fielder in terms of physical fitness on field. And last but not the least; he is still learning to play new, unusual shots other than orthodox cricket. 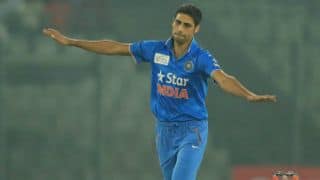