It all began at Newlands, Cape Town in the first week of the year. Now we head back to the same venue for the final match of the month-and-a-half long India tour of South Africa.

It all began at Newlands, Cape Town in the first week of the year. Now we head back to the same venue for the final match of the month-and-a-half long India tour of South Africa. After the drubbing in the ODIs, an injury-struck South Africa put up a gallant show at Centurion to level the T20I series 1-1. If they go a step further at Newlands, it will be two out of three series wins for them on the tour a good result considering India s current standings and South Africa s date with injuries.

It is no different for India. Having shown appetite for fight in the Test series and dominating the ODIs, India will like to return with both the limited-overs trophies. Newlands is set for a fitting finale and these key battles may go on to decide the match s fate:

Dhawan s form is among the reasons of India s domination in the limited-overs leg. For India to go a step further and complete another series win, it is important for Dhawan to capitalise on his touch.

Dhawan faced problems in the first over against Morris at Centurion, especially with the ball that swung in late. However, he made amends by clobbering Morris for 20 in his next over.

Morris is an experienced T20 cricketer with a lot of IPL games under his belt. Dhawan s form versus Morris experience should make it another interesting contest.

Kohli has amassed 881 runs in this tour but out of this only 27 have come in the T20Is. South Africa have done well in the 2 T20Is to ensure Kohli does not get to the 1,000-run mark on the tour. On Wednesday, Kohli was dismissed for 1 his lowest score of this tour.

With 4 wickets from 2 matches, Dala had an impressive start to his international career. He produced a ripper to send Kohli back in the second T20I: it climbed on to Kohli as it moved.

Kohli never shies away from challenges and will love to give it back to the South African pacer. Don t be surprised if Kohli walks out at No. 3 instead of Suresh Raina.

South African batsmen struggled against Indian wrist-spinners, which cost them the ODI series. India deployed only Chahal in the T20Is, and Chahal has been expensive. One man who isn t perturbed by the swelling reputation of Indian wrist spinners is Klaasen. In fact, he burst the balloon on Wednesday night at Centurion.

Chahal, bowling with a wet ball, finished with 4-0-64-0, the most runs conceded by an Indian bowler in T20Is. This isn t the first time that Klaasen has fancied the Indian leggie.

In 2017, Klaasen had slammed his first List A hundred, against India A. Chahal wasn t spared there either. More recently, in the Johannesburg ODI, Chahal struggled with the wet ball and Klaasen took full advantage.

Chahal isn t the one to take the battering lying down. From AB de Villiers to Glenn Maxwell to Quinton de Kock, Chahal has outfoxed men with greater reputations. He will up for this.

MS Dhoni vs critics and attentiveness

Dhoni has lost his sheen.

The ageing Dhoni is a burden

Time to look beyond Dhoni, the finisher

Critics had started to lash out at Dhoni as he struggled to finish things off in South Africa. But then came his second T20I fifty, during which he blasted 28 off the last 9 balls he faced. Now that s the ideal finish, isn t it?

Manish Pandey paid little attention to Dhoni s call in the final over. Not only did Dhoni hurl the choicest of verbal abuses, he also took out the wrath on the bowler by clobbering him for 14 in the next 3 balls.

At Centurion, Dhoni showed that there still is enough sheen and steam left in those ageing bones. For India s sake, his batting partners should not mind irking him in the death overs.

However, though the debate around his batting seems settled for now, Dhoni the wicketkeeper came under scrutiny with failed collections and missed stumping.

If Dhoni manages to quash the critics claims, India will be placed better. 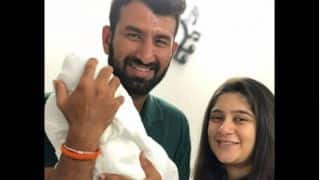 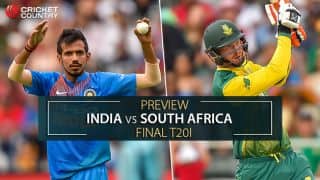 India vs South Africa, 3rd T20I preview and likely XIs: Both sides square off for bragging rights at where it all began