Virat Kohli’s India has signalled out a warning for the others. New Zealand, England and West Indies have a task in their hand.

Among the many cricketing clichés that we use on day-to-day basis is the one that describes about a team being as good as its captain and vice versa. But when the hot topic in the cricketing fraternity becomes a man who is mere 27-year-old, one who has already smashed several cricket records and reset them to his name, the team, in more than a way, starts belonging to him. It’s definitely MS Dhoni’s India till the time the great man is there at the helm in limited-overs cricket, but the way Virat Kohli has evolved to become the lifeline of this Indian team, it will not be exaggerating to say this is Virat  Kohli’s Team India. FULL CRICKET SCORECARD: India vs Australia, Super 10 Group 2, Match 31 at Mohali

That Virat Kohli is the face of Indian cricket and its success to a great extent is because of one of the most talented batsman of this generation is making it possible, almost every single time. ALSO READ: India vs Australia,T20 World Cup 2016: Twitter reactions for Virat Kohli’s match winning knock at Mohali

And that is not only because it is Virat Kohli who wins them matches with his impeccable approach to run chases and an undying spirit. He is only 27, but Kohli is seeing the cricketing world at his feet time and again with that kind of batting which a very few writers, with all their mastery over the words, can describe appropriately. Kohli is belittling the toughest of peaks in cricket with his batting prowess, and a big question lies in front of all those who wish to stop him: How?

Had India lost to Australia chasing 161, it would have brought an end to a fantastic run for the team under Dhoni that has won almost everything in the way. There have been blips — against Sri Lanka at Pune in February and against New Zealand at Nagpur earlier in the tournament — but the Indian juggernaut marches on towards the second T20 World Cup trophy with all its might. And Kohli epitomises this might to the greatest extent.

It will take many years for us, who from a distance are witnessing a legend-in-making grow from strength to strength, to determine exactly how Virat Kohli thinks. And when we try to find out, there is always a wide grin on Kohli’s face expressing the delight that it came off well that day, and the one that is also expressing a massive relief after getting out from such a situation successfully.

Kohli’s India is marching on, for him doing the impossible for his side while the others are chipping in with their valuable performances. Yuvraj Singh’s undying support to Kohli in the middle when the top is blown away, Dhoni’s wily leadership, Jasprit Bumrah and Hardik Pandya’s brilliance, India’s spin menace are invaluable fillers. But it was Kohli’s show all the way, as it was against Pakistan and as it was against Australia.

Chasing 161, India wobbled frequently, but Kohli hung around. In the last 3 overs India needed 39. Not a single slog was even attempted, no unnecessary risk was taken. Dhoni was not even noticed till a back pain caused some delay before the 19th over. That is when it all changed. That is when India seized control, Kohli opened up, and Australia went down to a familiar opponent whom they have rarely won over.

James Faulkner is Australia’s best T20 bowler. He mixes up them well; he uses the short ones wisely. But all that did not count against a rampant Kohli, who smashed 19 off only 6 balls to shut Australia out of the match.

And out of the tournament.

Virat Kohli’s India has signalled out a warning for the others. New Zealand, England and West Indies have a task in their hand. 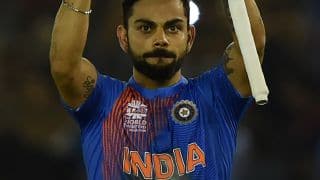 India vs Australia, T20 2016: Host’s sixth consecutive win against Australia in T20Is and other statistical highlights 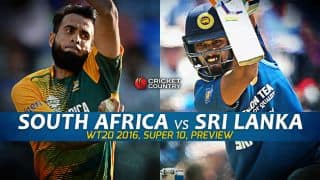