35-run defeat margin for RCB in this match, their biggest while chasing since 2013. They lost by 58 runs against Mumbai Indians at Wankhede in 2013.

1st instance of both the team captains being overseas players in IPL opening match, David Warner for SRH and Shane Watson for RCB. The first instance of an opening match involving an overseas captain happened in 2010, where Adam Gilchrist led DC and Sourav Ganguly led KKR.

1st instance of Virat Kohli missing the first match of an IPL edition for RCB.

0 players older than Nehra to take 100 wickets in IPL. At 37 years 341 days Nehra is now the oldest cricketer to achieve this. The previous oldest was of Harbhajan, at 34 years in IPL 2015.

23 balls taken by Yuvraj to complete his fifty, his fastest in IPL history. His previous fastest came from 24 balls (twice), for RCB.

3rd instance of a defending champion winning the opening match of IPL. SRH became the 2nd team to do so, while KKR did it in 2013 and 2015.

4th batsman to have hit 350 fours in IPL Shikhar Dhawan. He hit 5 fours in this match, and also became the 3rd left-handed batsman to achieve this landmark in IPL. Gautam Gambhir (422), Raina (360) and Kohli (359) are the others to have this record. 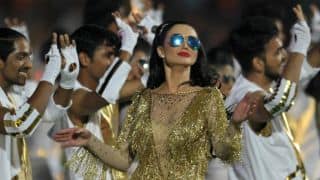 Lobsters in Cricket, Part 20: A Survey Down Under