Unless things turn around very quickly for Kohli, 2015 could be a nightmarish year for a man who has been at the top of India's batting charts since 2010.

Virat Kohli has had a lacklustre year so far in 2015. Barring the century against Pakistan in ICC Cricket World Cup 2015, Kohli has not gone past 50 even once. Shiamak Unwalla feels his lack of ODI runs is a worrying aspect for India.

Virat Kohli has scored over 1,000 ODI runs every year since 2011. He had scored 995 in 2010. He has not averaged less than 47 in ODIs since 2009. His strike rate has not been below 84 since 2009 either. Not counting his debut season of 2008 where he only played five ODIs in, it would not be a stretch to say that 2015 has been by far his worst year in ODIs. READ: India showed arrogance and complacency against Bangladesh in 1st ODI

Below is a table showing how Kohli has fared in ODIs every year since his debut in 2008:

As seen above, Kohli has struggled for runs ever since the tri-series against Australia and England. It seemed like he would get back to his high-scoring ways after scoring 107 against Pakistan in the ICC Cricket World Cup 2015, but his form again tapered off after that. READ: Overconfident India succumb to humiliating defeat against Bangladesh in 1st ODI

Luckily for India the likes of Rohit Sharma, Shikhar Dhawan, and Suresh Raina stepped up brilliantly and ensured that India reached the semi-final in convincing fashion. However, in India’s biggest most crucial match, Kohli once again failed. The ill-advised pull shot off Mitchell Johnson was reminiscent of Sachin Tendulkar’s dismissal against Australia in the ICC Cricket World Cup 2003 final, and had a similar impact on India’s campaign. READ: Was MS Dhoni right in pushing Mustafizur Rahman aside?

Against Bangladesh in the first ODI, Kohli would have been India’s best bet to chase down a tricky 308. That he was out for 1 made a huge difference to India’s final outcome. Even a half-century at that stage would have gone a long way in helping India win, but the way he chased at a wide ball outside off was quite disappointing to see.

Unless things turn around very quickly for Kohli, 2015 could be a nightmarish year for a man who has been at the top of India’s batting charts since 2010. With a lot of ODI cricket coming later in the year, India will be hoping that Kohli can find his form fast. The remaining ODIs against Bangladesh would be a great time to start. 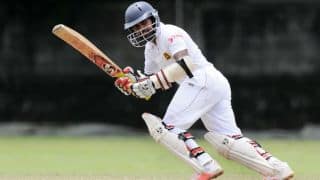