Unfortunately Sehwag, Gambhir, Yuvraj, Zaheer and Harbhajan are not there in the squad anymore.

Indian selectors on Thursday named 30 probables for the ICC World Cup 2015, with five pillars of the historic win in 2011 — Virender Sehwag, Gautam Gambhir, Yuvraj Singh, Zaheer Khan and Harbhajan Singh being dropped. Devarchit Varma wonders if this is the end of the road for these iconic cricketers.

The writing was on the wall. Looking back at how the last three years had panned out for the five iconic cricketers, there were actually no surprises that Indian selectors opted for young cricketers — something that they have been emphasising on since a very long time.

Virender Sehwag, Gautam Gambhir, Yuvraj Singh, Zaheer Khan and Harbhajan Singh were the pillars, formed the backbone on whose performances India had garnered all the success they had in the ICC World Cup 2011. Unfortunately, they are not there anymore and India look into the future with the careers of these five cricketers seemingly over.

India have announced their list of 30 probables for the ICC World Cup 2015 and the absence of these senior cricketers should not surprise anyone. While India will certainly be poor without their experience when they go into the 50-over marquee tournament, the team could not be helped merely by including players on their past reputations and achievements, something which they all had together failed to replicate.

Sehwag and Gambhir had recently opted out for the Deodhar Trophy 2014-15, the tournament that was being seen as an opportunity for the players on the domestic circuit to push their cases for the World Cup; the Delhi duo probably did not want to be a part of the race anymore. They had reportedly told the selectors should concentrate on the youngsters and could ignore them.

If two of India’s most senior batsmen squad opted out from an important tournament, it certainly tells that the they were not confident of selections in the World Cup and beyond. They have perhaps accepted their fate that their careers might be all but over.

After his post-cancer return to the cricket field, Yuvraj has been given ample chances by the Indian selectors to get back into the groove. Perhaps cancer has taken a lot out of Yuvraj; apart from a few sparks here and there, he has failed to achieve consistency; his poor show with the bat in ICC World T20 2014 final probably proved to be the final nail in the coffin. Since then Yuvraj has not played international cricket; he was probably not expecting that the selectors will play him in the mega tournament.

“After 2011, anyways, my story is different. My body took a long time to get back in shape. I want to get back to action. I am trying and will keep trying. If I am not named in the World Cup squad the life won’t stop,” Yuvraj said in October, a few months before the World Cup. If a cricketer is not confident about his place and talking about ‘life not stopping’ if he is left out, then how will he be named in the probables list?

Zaheer han had the same feeling. He feared he might have played his last match for India. Injury has kept him away since the Indian Premier League (IPL) 2013. He was targeting a comeback in the Champions Trophy 2014, which unfortunately never happened. The left-arm pacer had successful outings in South Africa and New Zealand, but critics always remained dissatisfied; he faded away from the scene.

Harbhajan’s ability to take wickets in absence of Anil Kumble has been questioned; when pressure increased on the Indian team after their sagging spirits post the World Cup win in 2011, Harbhajan succumbed to it and was eventually dropped. He was brought back for the series against England in 2012-13 but failed to make any mark. Harbhajan has not played any Test since March 2013, and has not played any One-Day International (ODI) since June 2011. Indian selectors would surely not have named someone in the squad who has not played a ODI since last three years!

Sehwag is 36 years-old, as is Zaheer. Harbhajan is 34; Gambhir, 33; Yuvraj, 32. On the other hand, Indian squads in the recent times have had an average age close to mid-20s. Even if age is kept aside and experience and talent is considered, the five big names have not done a great deal to support their cause. By the look of things, this could actually be the end of the road for them. 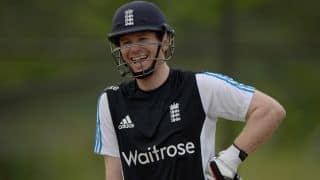