Former Indian captain Sourav Ganguly believes that Virender Sehwag and Zaheer Khan should be picked for Test team ahead of the upcoming South Africa tour. Virender Sehwag’s inclusion will send a very negative message across to all the young players, it would also mean that First-Class record is irrelevant when it comes to picking a team © PTI

Former Indian captain Sourav Ganguly believes that Virender Sehwag and Zaheer Khan should be picked for Test team ahead of the upcoming South Africa tour.

Ganguly told The Indian Express that, “Sehwag and Zaheer must immediately be brought back into the Test side. Don’t forget India will be playing 13 Tests overseas in the next one year or so. You need players with pedigree and experience in those conditions. And Sehwag and Zaheer have those qualities. Zaheer still is the best pace bowler India have. He can do so many things with the ball. I assure you that both Sehwag and Zaheer are not yet finished.”

Ganguly also backed Rohit Sharma and Suresh Raina for the No. 4 and No. 6 slots respectively. While talking about the vacant spots in the Test team, Ganguly said, “Yes, a couple of places would be up for grabs, No. 4 and No. 6. You need a specialist batsman at No.6 in overseas conditions. And my choices are Rohit Sharma and Suresh Raina respectively. They have the game and are the best options available.”

When asked about Sehwag and his bad form, Ganguly said, “A player of Sehwag’s class shouldn’t be judged on his performance in domestic cricket and List A games. He should be judged by his Test record.”

Ganguly has made some interesting points regarding Sehwag and Raina. Ganguly believes that Sehwag shouldn’t be judged on the basis of his current form, and no matter how ineffective he has been with the bat in the recent past, he should be given a go, purely on the basis of his Test record of the past.

This is not how a Test team can be picked. By that token, even Harbhajan Singh and Gautam Gambhir — two seniors who are in exile following a slump at the international level — should also be picked.

Sehwag’s inclusion will send a very negative message across to all the young players, it would also mean that First-Class record is irrelevant when it comes to picking a team. Sehwag has been making statements regarding his comeback, but there is nothing to back up with the bat. Picking Sehwag, irrespective of his horrendous form, would be grave injustice to all the young players who toil hard at the domestic level with a hope of making it to the national squad.

Ganguly is now a part of India’s commentary panel, and for this reason, I am hoping that he must keeping a track of First-Class records and recent performances of the players. But, by naming Raina for the No. 6 spot ahead of Ajinkya Rahane, Ganguly has made a shocking statement.

Raina is one of the most improved Indian players, but is he is still not the right man for Test cricket. He is very vulnerable against the short ball, and there is a big question mark with regard to his technique against the new ball.

Rahane, who has been warming the bench from past 12 months or so, is an old-fashioned batsman, who relies on his technique more than anything else. He has an outstanding First-Class record and far capable than Raina at Test match level.

It’s also amazing that he is not thinking of Virat Kohli for the No. 4 position. With his technique, class and experience, Kohli is the best bet for the No. 4 spot, and this leaves Rahane and Rohit for the No. 5 and No. 6 respectively.

During his playing days and also as a captain, Ganguly has always promoted young talent, for which he is still respected a lot. I have always been a big admirer of Ganguly’s fearless and selfless decision making, but his comments promoting Sehwag and Raina over deserving candidates is most disappointing.

(Madhav Sharma wanted to be a cricketer. Unfortunately, he has today more words than runs to his credit! He blogs athttp://madhavsharmacricket.wordpress.com/ and tweets at https://twitter.com/HashTagCricket) 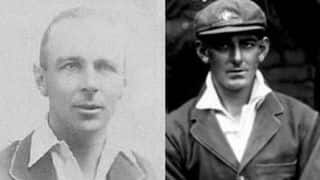