VR Vanitha says she also looks up to Mithali Raj, but playing under Harmanpreet Kaur is going to be a good challenge.

Vanitha VR, a key part of the T20I side and an upcoming big name in Women’s cricket talks about her journey in the game, life beyond cricket and much more in an exclusive interview with Deep Mehta.

CricketCountry (CC): How did you first begin your journey in the sport? What were some challenges that you faced along the way?

VRV: I started playing cricket when I was 11 years old at Karnataka Institute of Cricket (KIOC). I remember my dad taking me to the camp and it was surprising for me. Firstly, I didn t know that women even play cricket and that a women s cricket team existed. Secondly, as you know, every sportsperson has his or her own struggles and I have had mine. Initially, I used to crib a lot about playing the sport and facing these struggles and wondered why I should pursue it. But then, as the years passed by, I learnt that you cannot attain anything in life without a struggle. It made me tougher and I persisted.

CC: According to you, at this point of time, what should be done in order to take women s cricket in the country to the next level?

VRV: Right now, the board is doing a lot of things for us. Telecasting will help us get to the minds of the people. If the matches are telecast, a lot of people will start following women s cricket because obviously there are a lot of cricket fanatics in India but the awareness is not there. And you know, nowadays people have started following our scores on Twitter and on the BCCI website too. But then, live telecast of the game would do wonders for Women s cricket.

CC: What are some notable changes after BCCI took over the administration from Women s Cricket Association of India?

VRV: See, changes have gradually happened over a period of time. It was not something that happened overnight. Now that the contract is in place, we can call ourselves professionals. Being a cricketer I have given up a lot of things. I had my business and even education which I will have to complete. But now, I can solely focus on cricket because I am backed financially now. So that takes care of my needs. This is one benefit that we got under BCCI. Also, we now get to play on better wickets in better stadiums and also a great support staff.

CC: You mentioned your education. Are you a lawyer?

VRV: Yes, that is right. I have a few courses to complete and then I will get my degree. But, I will have to wait for a while because of the cricket commitments that I have.

CC: So, along the way, as you started playing cricket, were your parents supportive? Or did they want you to choose law as profession?

VRV: My parents have been really supportive to be honest, Deep. They have been the coolest, I can say. Yes, in the past they insisted I take a break from cricket as my grades went down, as I started bunking classes. They were really concerned as any parent would be.

But they backed me throughout and they still do. They are not even forcing me to get married. As you know, in India the mindset is such that a woman has to get married after a certain age. My parents let me take those decisions and want me to pursue my dreams.

CC: What has been most memorable experience till date on field?

VRV: Actually, there s quite a lot to talk about. In a recently concluded T20I, I enjoyed batting in Sydney. Though I only managed 28 runs, the challenge was exciting. Playing against the No. 1 team is one thing I will cherish a lot. And then, there was a catch in England, a diving catch to my left. That will still be the best catch I have taken so far. These are the little things I like, and I want to get better with every game. And of course, in the World Cup, the first game against Bangladesh was a good start for me. After that knock, people have started recognizing who Vanitha is. So it feels nice.

CC: Can you tell us more about your experience and journey at KIOC under coach Irfan Sait?

VRV: He has been my mentor and coach since I started playing. He has been always there for me. Whether it is 6 in the morning or 9 in the night he will still be there. You just need to message him or call him up and say I am on my way . His role was crucial in bringing Women s cricket to where it is today. We still sit down and strategise and plan things. He is very flexible and lets me do things in my way, so that is the best part about him.

CC: Whom do you look up to? Has any particular player inspired you?

VRV: Roger Federer is my role model. And in cricket, Mithali [Raj] is my favourite. I have enjoyed watching her bat, and it is a pleasure to bat with her now. There is a sense of calmness that I get when she is there. The determination in her eyes speaks a lot. She is one person whose actions speak louder than words. I look up to her in all ways.

CC: With Asia Cup T20 tournament coming up, how is the team preparing for it? How different will it be playing under Harmanpreet Kaur in a big tournament instead of Mithali Raj?

VRV: In terms of preparation, we are scheduled to play a series against the West Indies starting November 18. Our preparation is going to be as good as anything else as we are playing the No. 1 team in the format. They are the world champions. Secondly, under Harmanpreet Kaur it is going to be a good challenge. She is very aggressive in nature and more like Virat Kohli, you can say. She displays her passion through aggression on field, even her batting. That brings the best out of her.

I personally believe in that too. The aggressive style of play suits my kind of game. This will be my first international tournament under her. I have previously played a lot of challenger series under her. We are looking forward to it and we will make sure to back her as a leader in all ways.

CC: You have not played an ODI for India for a couple of years now, but are a key member of the T20I side. Is making an ODI comeback something that you look forward to or are you happy to play just T20Is at the moment?

VRV: Not at all. The ultimate dream is to play the longer formats of the game. I am trying my best to get into the One-Day side. The selectors are keeping an eye and I am in the scheme of things. Maybe a big innings can get me in the side. I am not desperate behind that though. I am working on my process and am not really worried about that because I have T20s in my hand. Focusing fully on that.

CC: Harmanpreet Kaur and Smriti Mandhana will be the playing in the Women s Big Bash League soon. Is playing T20 leagues around the world is something you too look forward to?

VRV: Definitely, because I will get an opportunity to rub shoulders with international players. Not a lot of times, we women cricketers get a chance to play with other international players. Every league has its own trend. Big Bash and Super League will probably set the trend. T20 is the future if you look at it. T20 is the only format where we can grab a lot of eyeballs and promote women s cricket, because not a lot of people today watch Test cricket. The shorter formats are what people enjoy. These leagues will lay the platform for us.

CC: Describe yourself in one word.

CC: What is your idea of a perfect holiday?

CC: What is the most important lesson that life taught you?

VRV: To be humble, compassionate and kind. Because apart from being a cricketer, I strive be a good human being.

VRV: Tennis, because I started following Roger Federer. Because of him tennis looks so easy. I also play badminton and a bit of squash.

Mithali Raj and now Virat Kohli with the way that he plays and carries himself.

VRV: One characteristic that sets you apart from others?

My humour. I am a really funny person. Even in a tense situation, I can lighten the mood and atmosphere.

CC: If you could choose one superpower, what would it be and why?

VRV: To hit every ball out of the park (laughs).

CC: What is your all-time favourite movie?

VRV: Queen of Katwe. It is really a must watch.

CC: One goal you want to achieve in your career?

VRV: Deep, honestly I don t set goals or targets for myself, because I am a team player and I live in the present moment. So, no individual goals as such.

CC: What has been your biggest disappointment?

VRV: Not making it to the knockouts of the T20 World Cup despite playing in home conditions.

CC: Most embarrassing moment in your life?

VRV: Every time I get out on zero, it is an embarrassment for me.

VRV: They call me Vani generally.

VRV: I talk to everybody in the dressing-room, but I share a special bond with Thirushkamini.

CC: Funniest moment on or off the field?

VRV: There have been many funny moments. I cannot really think of one right now.

VRV: Tests. Because I like longer formats and you can score easily as there is less pressure compared to T20s etc. To play Tests for India is the ultimate dream.

(Deep Mehta is a freelance cricket journalist and entrepreneur. His Twitter handle is @mehtadeep) 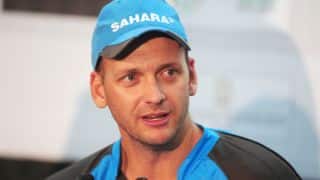