"Brendon is not merely an instinctive, impulsive cricketer; he had game plans in place, he knew what his strengths were but more importantly he was also aware of what his limitations were". — VVS Laxman.

Brendon McCullum’s sense of timing has always been impeccable, in every sense of the word. In a further affirmation of his status as one of modern-day cricket’s most influential batsman, Brendon smashed the record for the fastest Test hundred in his final appearance for New Zealand, a fitting manner in which to bow out of a game he has played with great aggression, positivity and commitment.

Take away a Lance Cairns, a Mark Greatbatch, a Chris Cairns or a Craig McMillan, and New Zealanders traditionally have tended to stick to the conventional when it came to batting. Even the great Martin Crowe, who I followed with great interest growing up, was straight out of the coaching manual, as correct a batsman as you can get.

Brendon, however, is very different to most of the New Zealanders I have seen. He is fearless and aggressive, and his batting is pretty much a reflection of his personality. He has always lived life on his own terms and he batted on his own terms too, with a refreshing flair and abandon that he based on solid basics and exceptional hand-eye coordination.

I did not play a lot of Test cricket against Brendon, though I do remember the series in 2010 when he did not keep wickets. For a man who spent a majority of his career as wicketkeeper-batsman, Brendon was an outstanding fielder, among the top five in the world. In the first Test in Ahmedabad, Brendon at cover and Martin Guptill at point was an impregnable cordon. I generally used that gap to score plenty of runs against the spinners, but Brendon would be on the ball every time I played it there. He would then give me a knowing smile, and I sometimes hold him responsible for denying me a hundred in that second innings! At the end of the game, we had a good laugh and I could not help but ask him, “Why don’t you just go back to keeping wickets, at least when I am batting?!”

I did play alongside him at Kochi Tuskers Kerala in the IPL. He was one of the hardest workers in the squad, never missing even an optional session in the sapping humidity of Kochi. He approached every net session as if it were a match, honing his craft, batting for long periods and placing particular emphasis on his fielding skills. He also spent plenty of time in the gym, working on his physical fitness. By the end of every training session, he would appear drained, the sweat pouring down his face, but he never lost the ability to smile because he had enjoyed putting himself through the physical rigours.

I also noticed Brendon was not shy of expressing his views in a forthright manner, taking his role within the leadership group to heart. He would not mince words as he made his opinions on strategising very clear, but he did so without threatening to undermine the authority of the captain. He was the veritable team man, looking out not just for himself but for his mates too. We opened the batting a few times for Kochi, and he was honest enough to acknowledge that I was the better player of spin, so he would turn the strike over to me when a spinner came on. But when the fast bowlers were in operation, he would be at his marauding best.

Brendon is not merely an instinctive, impulsive cricketer; he had game plans in place, he knew what his strengths were but more importantly he was also aware of what his limitations were, and he always played within those limitations.

What also caught my eye was how much time he devoted to his family outside of training sessions and actual match play. His wife and kids were travelling with him, and Brendon would spend long hours with the kids either playing cricket or swimming with them. He was an everyday dad even though he was a superstar cricketer. Humble and grounded, he has been a wonderful ambassador for New Zealand and world cricket, showing that you can play the game with a smile and without cutting corners.

When India travelled to New Zealand in early 2009, those of us who joined the squad only for the Test matches played one domestic game each so as to get a feel of the conditions. I played for Otago, while Brendon was not obviously there — he was, after all, engaged in international duty!

I spent a lot of time with his older brother Nathan, who would speak of their days growing up, of how fiercely competitive the two brothers had been in their formative days, of their forays into rugby like most kids in New Zealand, and about how they always pitted their wares against men older than them because it was a case of when you got the opportunity, you had to grab it.

Otago still had an amateur structure in place. The Otago Cricket Association is headquartered in beautiful Dunedin but the facilities were pretty much basic. To have emerged from that south island city and gone on to captain New Zealand with such flair and élan is a fantastic achievement by Brendon.

His early days in Otago toughened him up and allowed him to appreciate the honour of wearing the New Zealand cap even more. It showed how committed he has been to the team’s cause, indicated in him playing non-stop, without a break, from his first Test to last. He took over the captaincy at a difficult time from Ross Taylor, but his natural leadership qualities and his wonderful man-management skills ensured that there was a smooth transition and camaraderie.

As captain, Brendon was outstandingly positive, as exemplified by the manner in which New Zealand played at the 2015 World Cup. He coaxed Trent Boult and Tim Southee into adopting aggressive means, putting a premium on taking wickets and backing them with attacking fields. His team bought into the captain’s mindset, playing the most entertaining and fearless brand of cricket on their way to the final where they were halted by an inspired Australian outfit. Under him, New Zealand have shed diffidence and become a team that fans love to watch, with an array of exciting talent that has set the cricket world alight in the last couple of years.

I would put the successes of Guptill and Kane Williamson, as well as some of the other youngsters like Corey Anderson and Henry Nicholls, down to Brendon’s ability to inspire and motivate and instil confidence within the group. He leaves New Zealand cricket in excellent hands, with the promise of a brighter tomorrow under the increasingly impressive Williamson.

While the fastest Test hundred is something one always thought Brendon was capable of, given his approach, the fact that he is New Zealand’s only Test triple-centurion to date is a little bit more of a surprise, particularly given that it was not a typically blistering, bruising innings. With his team facing defeat in the second and final Test against India at the Basin Reserve, he batted for nearly 13 hours in compiling a memorable 302, showing that if the situation so demanded, he could adapt and adjust from his characteristic fifth-gear play.

That he had the backing and the confidence of coach Mike Hesson, an old friend from their Otago days, meant he could captain the way he wanted to, with an eye always on taking the game forward. While New Zealand had great success in limited-overs formats under Brendon, it is worth remembering that they did not do too badly in Tests either, especially at home where their familiarity with the conditions stood them in good stead against various oppositions.

The timing of Brendon’s retirement might have taken a few by surprise, but speaking from experience, when you reach a point where you are convinced it is the right time to go, then you must. The temptation to have one final shot at the World T20 crown — and I believe New Zealand had a fantastic chance — would have been massive, but ultimately it is Brendon’s decision and I totally support and respect that. New Zealand will be a touch depleted side at the World T20 without that talismanic skipper, but that should in no way be held against a man that gave his heart and soul to New Zealand cricket.

The IPL will be Brendon’s first assignment after international retirement, and I am sure his followers at new franchise Gujarat Lions will welcome him with open arms. And I am equally confident that he will not let his numerous fans down, because that is something Brendon McCullum is not very good at. 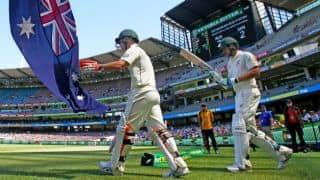