CricketCountry had the opportunity to talk to Chief Mentor VVS Laxman about the Sunrisers Hyderabad approach to IPL Auction 2017, his reaction to Monday s proceedings.

Defending champions Sunrisers Hyderabad (SRH) look as strong as any side ahead of IPL 2017 after Monday s auction got over at Bengaluru. The batting looks in safe hands with captain David Warner at the top, along with Shikhar Dhawan, Kane Williamson, and Yuvraj Singh. Their much-respected three-pronged seam attack of Ashish Nehra, Mustafizur Rahman, and Bhuvneshwar Kumar (backed up by Chris Jordan and Barinder Sran) will be supported by the spin of Mohammad Nabi and Rashid Khan. However, the strongest points of the SRH squad are probably their well-rounded nearly glitch-free look, and an extremely potent reserve bench, which leaves them with the enviable problem of plenty. IPL Auction 2017: FULL News and Updates from IPL 10 auction

On a side note, the selection of Nabi and Rashid the first two Afghanistan cricketers to be a part of IPL made Sunrisers immensely popular among cricket fans. Afghanistan cricket has a devoted group of fans across the world, who cheered at the astonishing rise of the country in a little over a decade. Seldom has cricket played a role this significant in the resurgence of an entire nation.

After the auction, CricketCountry had the opportunity to talk to Chief Mentor VVS Laxman about the Sunrisers approach to auction, his reaction to Monday s proceedings, the overall team structure, and the two Afghanistan stars.

CricketCountry (CC): Are you happy with the way the auction went today?

VVS Laxman (VVS): Yes, I suppose. We got all the players we wanted, all the skill-sets we wanted to acquire. As of now the team looks formidable. The new recruitments now brought stability, and will allow us to try out four or more different combinations.

CC: So you have got mostly got whoever you wanted to?

VVS: We have got the skill-sets we wanted. It was quite satisfying.

CC: Were you surprised by any of the bids that happened?

VVS: See, [Ben] Stokes was expected because he has that X-factor, and as an all-rounder he is invaluable. However, I was a little surprised by the amount [Tymal] Mills got. He did very well in the T20I series against India. I think it was because RCB parted ways with Mitchell Starc.

Note: The demand for Stokes shot up from his base price of INR 2 crores in no time. In fact, Mumbai Indians had raised their paddle even before the bidding started. He finally went for INR 14.5 crores the highest bid for an overseas player in IPL history to Rising Pune Supergiants. Mills, on the other hand, had a base price of INR 50 lakhs. Royal Challengers Bangalore finally acquired him for a whopping INR 12 crores.

CC: Are there any specific bids you want to talk about?

VVS: I am very happy with the inclusion of two Afghanistan cricketers, [Mohammad] Nabi and Rashid [Khan]. We strongly believe that both of them are impact players. They come with different skill-sets. Nabi is an all-rounder who can come and do the finisher s job and is a very clever bowler who can bowl the Powerplay overs and in the death. Rashid, on the other hand, has that X-factor, and is a wicket-taking bowler. He has impressed everyone with the limited opportunities he has got at international level.

CC: You will definitely play [David] Warner and Fizz [Mustafizur Rahman]. Are you going to give both Afghanistan cricketers a go from the beginning?

VVS: The Bangladesh cricketers have to leave early, which means that Fizz will not be available for a lot of matches. That is also why we have got a quality fast bowler in Chris Jordan. And now, with Ashish Nehra, Bhuvneshwar Kumar, Barinder Sran, and others, we have got a formidable bowling line-up. One of the reasons why Sunrisers won the last year s edition was because our bowlers did so well, including the final even after Chris Gayle and Virat Kohli got them to a rollicking start.

Note: Chasing 209, Gayle and Kohli had added 114 in 69 balls for the opening stand. At that stage they needed 94 from 51 balls, but the Sunrisers attack rose to the challenge and restricted them to 200 for 7.

We are also happy about the two Hyderabadis we bought this year, Tanmay Agarwal and Mohammed Siraj. Both are very good prospects, and the future looks bright for both of them. They have been rewarded for their performances in domestic cricket.

CC: How do franchises prepare for the auctions?

VVS: We at Sunrisers have a very clear strategy in place. The preparations begin at least a month in advance. We have at least three or four strategy meetings, and by the day of the auction we know what skill-sets we have to target. We also have a budget for every skill-set. Then, for every set we shortlist three or four cricketers, when they are scheduled, and their base prices. The clarity in knowing the exact requirements is important when you go for the auction. 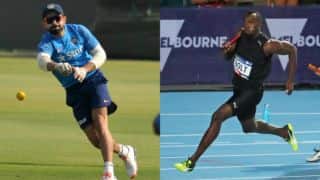 Virat Kohli hails Usain Bolt; aspires to run as fast as him 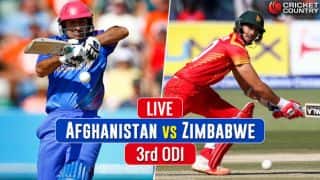