"Will India successfully defend their title on June 18? I do not see why not," writes VVS Laxman.

Any which way you look at it, it is the mini World Cup: the top eight teams in the world, in a crisp and concise event, with every game relevant and no scope for slip-ups. That is the Champions Trophy for you, a tournament that brings the best players in the world on a single platform for a little over a fortnight, with high-intensity matches guaranteed to throw up excitement and thrills.

It is a tournament that, on paper, any of the eight teams can win. Winner-picking, therefore, will be a little foolhardy, but my four semi-finalists will be Australia and England (from Group A), and India and South Africa (from Group B). England have the advantage of playing at home, and have reached the finals of both Champions Trophy tournaments they have hosted previously in 2004 and 2013. They have changed their approach to limited-overs cricket following their inglorious first-round exit in the 2015 World Cup, and will be a handful, but whether they go all the way this time remains to be seen.

India will always be a force to contend with in such tournaments. Their form in the two warm-up games has been impressive, and has left Virat and Anil with a happy headache. India are also fortunate to be coming into the tournament after a month and a half of IPL, played in front of packed houses. The high-voltage contests will have prepared the players psychologically for both the defence of their title and for the pressures that go with being the defending champions. Especially considering that India s first game is against Pakistan, the IPL experience will stand the team in exceptional stead, even accounting for the change in formats.

It was wonderful to see Shikhar Dhawan continue his IPL form to the warm-up games. More than the runs he scored 40 and 60 it was the way Shikhar batted that was pleasing. He was one of the stars when India went all the way in this tournament in 2013, and is somewhat of a confidence player who is very attacking and positive once he gets on a roll. That he is a left-hander is an added bonus; India have traditionally relied on good starts to kick on in the middle overs, and a Shikhar in a good space mentally is an unquestioned asset.

There is a feeling that Rohit Sharma is a little underprepared. He did not spend too much time in the middle against Bangladesh after having missed the first game against New Zealand. Also, since his comeback from surgery to fix a quadriceps injury, Rohit has only batted in the middle-order for Mumbai Indians. But he is far too experienced a player to be bogged down by these factors. All he needs to do now is make a slight mental adjustment when he returns to opening the batting. Shot-selection and playing close to the body in the early stages will be the key; Rohit has shown in the past that once he gets his eye in, he is practically unstoppable. It was in 2013 that he had grabbed the opening with both hands and made it his very own. Two subsequent ODI double-centuries indicate his command over white-ball cricket. He must be watchful at the start of his innings, and then he will purr along beautifully.

Ajinkya Rahane will be extremely disappointed at his performances in the warm-ups. More than the lack of runs it is the manner of his dismissals that will rankle. But Ajinkya is a wonderful student and an astute reader of the game, and he is what we call a thinking cricketer. He will learn from these mistakes and be better off for them. He may not quite be in the mix right now, but he is no less a cricketer for his twin failures in the practice games.

Virat batted sublimely against New Zealand, and his driving down the ground was a veritable feast. To me, he is one of the finest batsmen in the world right now, and when he is firing on all cylinders he paints the prettiest imaginable pictures. He is the pivot at No. 3, both while batting first and particularly while chasing, and while India s fortunes do not entirely depend on the captain, to have him in good touch and rhythm is a massive boost for the confidence.

Dinesh Karthik batted brilliantly against Bangladesh after being dismissed without scoring in the first match, extending his brilliant form of the last one year in the domestic circuit. He walked in to a mini-crisis at 21 for 2, but the way he handled the moving ball and Bangladesh s not-inconsiderable fast-bowling threat was exemplary. He was decisive in his footwork, playing freely off front-foot and back; and when the spinners came on, he struck the ball brilliantly square of the wicket on both sides, using the depth of his crease. He is obviously a very good wicketkeeper but also a very smart fielder without the gloves, offering Virat a wonderful back-up option. Dinesh only came into the squad at the last minute as a replacement for the injured Manish Pandey, but he has already proved his worth several times in the past, and is a wonderful team man as well.

It is unfortunate, but Dinesh will most likely miss out if Yuvraj Singh is fit and available. Yuvi s exploits need little chronicling at this stage of his career. He has not had much cricket in the last few weeks, but he is a big-match player with loads of experience under his belt. Should he shake off the effects of the viral fever that has plagued him, he is a shoo-in for the playing XI. The good thing is that India s opening game against Pakistan is not until June 4, which gives the team management and Yuvi a little more time. His left-arm spin will come in handy as an additional option, and while he is not as electric on the field as he used to be, he can still be a dangerous presence, as he has already shown more than once this season. A lot of expectations will be on the two most experienced players in this team, Yuvi and MS. Both of them will be batting at crucial positions, Nos. 4 and 5, where they have to be versatile and play the dual role of anchor and finisher depending on the situation the team is in.

More than anyone else though, it was Hardik Pandya who gladdened my heart on Tuesday. For a decade and more now, India have relied on Yuvi, Suresh Raina and MS Dhoni to don the garb of the finisher. It is an extremely difficult role that this trio has carried out in some style, but it is time India started grooming newer, younger men to embrace that responsibility. Hardik and Kedar Jadhav seem perfectly capable of doing so. Kedar has been a picture of consistency in his brief career, whereas Hardik is gradually discovering the great potential lying inside him.

Hardik plays proper cricketing strokes, is a strong lad and has very good basics. He has also matured hugely in the last year or so, and his confidence is on the upswing, which are all excellent signs as India look to the future. He may not always get a game because I do not think he is a consistent 10-over bowler yet in ODI cricket, but he will get there sooner rather than later. I have not seen too many more exciting Indian players in the last few years, and I will watch his progress with great interest and anticipation.

A close second to Hardik in terms of gains accrued from the warm-up games is the collective firepower shown by the pace-bowling group. As a unit, this is perhaps the strongest attack India have put out, and each of the four specialist fast bowlers is at the top of his game. All of them are genuine wicket-takers, and to win a tournament of this nature, you must take wickets to set things up for the batting unit. There is no better dot-ball than a wicket-taking one, and in these two games, Jasprit Bumrah, Bhuvneshwar Kumar, Mohammed Shami and Umesh Yadav have all shown great rhythm and bowled beautiful lines and lengths without compromising on control and accuracy. They have exploited helpful conditions extremely well, and their extra pace as well as vast variations allows them to make an impact even on placid tracks. It is a great strike-force to have; how well they go will be crucial to the overall scheme of things.

In the last two games, neither Ravindra Jadeja nor Ravichandran Ashwin has therefore had too much to do in terms of bowling, but both are quality performers who have mastered the art of taking wickets. If the conditions are favourable to the quicker bowlers, theirs will essentially be a holding role but both are skilled enough to not necessarily depend on pitches for assistance, so they can be a handful even on flat decks.

A lot will of course depend on the overhead conditions and the nature of the surface, but all other things being equal, my bowling attack will be Bhuvi, Bumrah, Umesh, Jadeja and Ashwin. It will mean India will bat till No. 9, and still play five bowlers each of whom can give the captain the confidence of bowling 10 overs. The temptation to play Hardik will be immense, but for that India must have a fully-fit Yuvi and Kedar bowling a few overs to complete the fifth bowler s quota alongside Hardik. The combination will eventually be dictated by conditions, but Virat is in the great position of including any of the 15 in the squad without any perceptible weak link or imbalance.

I like the look of the Indian team, of which several played in the 2013 edition that India won under MS. Will they successfully defend their title on June 18? I do not see why not. 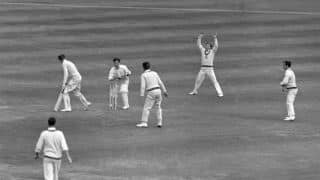 Jhulan Goswami: Indian society is educated enough to look beyond gender-bias in cricket