For the first time ever India won more than one Test in a series in West Indies.

A combination of elements and lack of preparedness from the venue authorities brought a dull and tame finish to a Test series that was dominated almost entirely by Team India. For the actual amount of cricket that was played, which can be said to be only three Tests, I think 2-0 was a fair reflection of the way the Test series panned out in the Caribbean. For a season which is going to be filled with Test cricket for India, we should consider this as an ideal start, as it embarks on its journey to become the best in the world.

There were plenty of positives for India to bring back with them from the Caribbean. For the first time ever, India won more than one Test in a series there, and while that in itself was creditable, what was even more impressive was the manner in which the team played. The brand of cricket was exciting, and India found multiple heroes with bat and ball at different stages of the Tests.

As I mentioned in my previous column, Virat Kohli led from the front in the first Test to set the tone, and KL Rahul grabbed his chances with both hands. Ajinkya Rahane was consistent and continued to show how much value, assurance and stability he brings to the middle order, but to me, the biggest batting gains have to be Ravichandran Ashwin and Wriddhiman Saha.

First on Ashwin, who came away with his third successive Man of the Series award. Having been a batsman in his formative years, Ashwin knows how to stay in the middle and score runs, a knack that is extremely crucial in international cricket. Being a specialist bowler, he is also in the unique position of being able to think like a bowler too at the same time. That is an unbeatable combination when it is allied with practice, innate intelligence and an inherent fire to keep getting better. At No. 6 he is a vital cog in the wheel as India seek to play five specialist bowlers. That he is willing not just to embrace responsibility but also excel as a batsman, is a tribute to his character and adaptability. VVS Laxman: India go into the West Indies series 2016 as favourites

As much as the runs, it was important for Ashwin to pick up wickets as well. While the runs he makes are of great value, his primary job is still to take wickets and spearhead the Indian bowling. Far too often in the past, we have seen cricketers break into the Indian team on the back of their bowling exploits and lose their way a little as bowlers even as their batting has taken wing. As a result, while they might have been labelled all-rounders, that was not necessarily the case because they had become bowlers turned batsmen.

Ashwin’s five-wicket hauls in both the first and second Tests proved that there is little danger of him going that way. That he is already closing in on 200 Test wickets despite having played fewer than 40 matches is proof of his excellent wicket-taking record, and with 13 more Tests to follow, all at home, I expect him to add substantially to that tally.

There is a lesson in Ashwin’s success that Ravindra Jadeja would do well to learn. Jadeja is in the Indian squad essentially as a left-arm spinner, but he is no mean batsman. One of a very select group with three first-class triple-hundreds, Jadeja has been an underachiever with bat for the country. He knows as well as anyone else that he is a far better batsman than his international numbers indicate, and if he can pick Ashwin’s brains as well as Kumble’s, I am sure he will perform with greater consistency with the bat for Team India. Laxman: Memories of honing skills and building bonds

Which brings us to Saha. I was delighted to see the confidence stemming from his glovework extending to his presence in front of the stumps as well. I am sure Saha must have felt the pressure of stepping into MS Dhoni’s giant shoes when he took over those big gloves at the beginning of last year. His growth as an India cricketer has been fairly obvious, both as a wicketkeeper and as a batsman. For him to go on and get a hundred in Gros Islet under great situational pressure with India being in a tight spot is a shot in the arm that he will certainly build upon. I thought the partnership between Ashwin and Saha in the third Test symbolised everything this Indian team stands for — common sense, intelligence, patience, a never-say-die spirit, and the belief that no hurdle is too high to cross and no obstacle insurmountable.

A performing Ashwin at No. 6 and a confident, assured Saha at No. 7 will provide Virat and Anil the luxury of picking the extra bowler should the conditions so dictate. It is a good situation to be in, although as the home series nears, it will be important to identify not just who the top-order batsmen are and what their positions should be, but also to stick with a steady opening pair because, after all, well begun is half the job done. Personally I believe players perform better if they are confident of their position in the side and in my opinion they should be given sufficient chances before being dropped from the team.

The success in the third Test of Bhuvneshwar Kumar was another positive spinoff from the Caribbean. Having seen first-hand how hard Bhuvi worked on his craft during our time together at Sunrisers Hyderabad, I am not at all surprised that he has slotted perfectly in on his return to Test cricket. Bhuvi is a keen student and a fast learner, always looking for ways to get better and leaving no stone unturned in his bid to do so. His spell with the second new ball on the fourth day in St Lucia meant India could make light of the loss of an entire day to rain, and still come away with a comfortable victory. It has opened up further vistas for the team management, which now has a wider pool to choose from, depending on the conditions and the opposition.

Speaking of the opposition, there were the odd flashes of spunk and spark from West Indies, and even though they have a long way to go before they can challenge the big boys on a consistent basis, the signs are encouraging.

If they are looking for inspiration, they need not look beyond the final day at Sabina Park when Roston Chase spearheaded a stirring rearguard action in the company of Jermaine Blackwood, Shane Dowrich and the captain, Jason Holder. These are all young men who have plenty of cricket ahead of them, and should be expected to form the backbone of the West Indian batting in years to come. They have the skill and the ability, of that there is little doubt. They will also only get better with experience and exposure.

There is something there with which to work, just as there is on the bowling front with Shannon Gabriel, Miguel Cummins and the exciting Alzarri Joseph all capable of troubling the best. It is a matter now of keeping the faith, of sticking with them instead of constantly chopping and changing, and hoping that they will translate their immense potential into performances that will make the world sit up and take notice.

In some ways, the fiasco at the Queen’s Park Oval, where we had four days of bright sunshine and yet not a single ball bowled, summed up the state of West Indies cricket. I know that this is not the ideal cricket season in Trinidad, just as it is not in Durban either, where also a wet outfield has destroyed the first South Africa-New Zealand Test, but at a time when Test cricket is struggling to stay afloat, this is exactly the kind of advertisement the longer format does not require. It is essential to at least keep the fans that are already there, and then look to draw newer fans in. Experiences such as those in Port of Spain and Durban are unlikely to help that cause. Apart from properly scheduling Tests, we need to appropriately equip grounds to deal with bad weather.

Away from the Caribbean, it was wonderful to see Sri Lanka shake off a difficult few months and conquer Australia in such an authoritative fashion. Finally, it would appear as if they have unearthed a crop of young batsmen who can take their team forward in the post-Jayawardene-Sangakkara era, though it is impossible to replace those legends. Rangana Herath is an ageless wonder and was again the bowling superstar. The 3-0 pounding would have set alarm bells ringing in the Australian camp; after all, they play India in the New Year, and the four-Test series will be a severe test for Steve Smith and his men.

And congratulations are due to Pakistan on becoming the No. 1 Test team for the first time ever. It is a phenomenal achievement by a team that has not been able to play at home since 2009, and goes to show how much natural talent they possess that is open to being honed and fine-tuned.

Misbah and Younis are true role models and men who lead from the front. The elder statesmen got the best out of the Young Turks. Pakistan deserve their No. 1 status, particularly after the stirring fashion in which they fought back from 1-2 down position to win at The Oval and square the series in England.

India will return home towards the end of the month at the culmination of a seven-week tour that now includes two T20Is against West Indies in Florida. It should be an exciting weekend, with the former World T20 champions playing the current winners. Having played in the All-Stars games in the United States, I am certain these matches will be well-patronised and open up another exciting chapter as cricket seeks to spread its wings into America which is a country whose another name is opportunity. 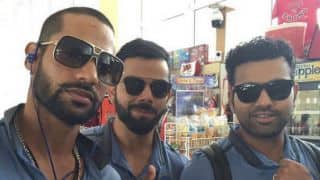