VVS Laxman: The more I see Virat Kohli, the more he leaves me astonished

VVS Laxman: The more I see Virat Kohli, the more he leaves me astonished

There is much to admire about MS Dhoni, just as there is so much about Virat Kohli that is exceptional, writes VVS Laxman.

Mohali was the place to be in for any Indian cricket fan on Sunday night. The glorious skills of the national team were on display in an exhilarating exhibition of batting; the limited-overs captain in perfect synchronisation with his successor in Test cricket to put New Zealand to sword.

There is much to admire about MS Dhoni, just as there is so much about Virat Kohli that is exceptional. From the moment the two joined hands at 41 for 2 as India mounted an assault on New Zealand s 285, the result was pretty much a foregone conclusion, especially after Ross Taylor dropped Virat when he was on 6.

The more I see Virat, the more he leaves me astonished. I have said plenty about Virat in these pages, but it is as if he is as determined to push the writers as he is to push himself in this extraordinary journey of batsmanship that he has undertaken. I have come across very few batsmen who have been so exemplary when it comes to restraint, and I have shared a dressing-room with some of the legends of the game.

Particularly from the start of this year, Virat has been a run-machine. The enormous standards he embraced during the limited-overs series in Australia in January spilled over to the IPL, then on to the West Indies tour where he made his maiden Test double-century. Then came Indore and a second Test double. In the last week, he has shown that he has lost none of his appetite for run-scoring, with his brilliant knocks while chasing in both Dharamsala and Mohali in the one-day series against New Zealand.

Someone asked me the other day if scoring runs by the bucketful on such a consistent basis might not instill a sense of boredom in the protagonist. Yes, it can, but only if you are looking at the outcome. If you are focusing on the process like Virat is doing now, then boredom is the last thing that will be on your mind. The enjoyment that comes from doing the little things right, which eventually lead to the larger picture which is to ensure that the team ends up on the winning side, can become repetitive, but never ever boring. After all, that is what you play sport for, and especially if you are in a team environment.

The little things come from your preparation. From not just the understanding that you start each innings on zero and that a new innings is not an extension of the previous one, but also from the ability to translate that understanding into action. From a strong mind. From a burning hunger to be the best you can be each day, and to do the best by yourself and your mates. It comes from knowing your game, from having a game plan, and from following that plan with total diligence while being open to veer from it if the situation so demands.

I spoke earlier of restraint. Virat is now a more complete batsman than he ever has been. Without sacrificing orthodoxy, he has become an almost 360-degree player who now employs the square-cut or the square-drive with greater regularity than ever before. He has every shot in the book, and he has shown repeatedly that he can play them with an authority and a control that comes to only a very few. Sometimes, he has four shots for each ball. For instance, to the same delivery pitched just outside the off stump, he can play the dab to third-man for a single, drive through the covers for four, close the bat-face a little and drive the ball between the bowler and mid-off, or bring his bottom hand into play and whip it through mid-wicket. He can do any of these with total assurance and command, and therefore to deny himself certain luxuries because the percentages may not necessarily be in his favour at the start of the innings calls for tremendous discipline and mental strength.

What has been notable about his innings in both Dharamsala and Mohali is the manner in which he started off. At no time did he even give the impression that previous successes were on his mind. The first few deliveries were more for getting a feel of the pitch, the conditions, and the bowling. It was only when he was convinced that he had assessed things that he began playing his strokes. One of the dangers of being in prime form is that you can get overconfident and complacent. Ironically, the other danger is that because of the same reason, you can also become subdued and ultra-cautious. You do not want to throw form away, so you sometimes do not play according to the merit of the ball. Virat has struck this balance beautifully; he has been neither complacent nor subdued. If there are any huge secrets to his wondrous run, this is one of them.

Also, I have noticed that his upper body, his feet and his hands are all in perfect synchronisation and in the ideal balance that they should be in. It is indicative of the complete command of the artist over his craft. Virat is at the peak of his prowess, and I foresee this run being an extended one. I am also extremely interested in seeing just how much higher he will elevate that peak.

Virat is not just a dashing strokemaker: he is also a brilliant runner between the wickets. Sometimes, as you look at the skyscrapers, you can miss the little utility blocks lying in the middle. The ones and twos are the bedrock of Virat s batting. His speed across the turf is tremendous, and he is as good a judge of a run as there is. Unless there is a long single on offer, he always takes the first run so fast that the fielder knows that a slight slip-up can result in a second run. Such constant pressure can bring about mistakes, and when they happen, Virat is in prime position to capitalise because he is always on the lookout for the second run.

That is what makes Virat and MS such a delight to watch in tandem. For so long now, MS has performed multiple roles with aplomb. To get to the milestone of 9,000 ODI runs is a fabulous achievement for someone who has batted at Nos. 5 and 6 for a majority of his career, who has been the captain for nine years now, and who is also the wicket-keeper. MS has handled all these responsibilities brilliantly, and even though he is 35 he has lost none of his nous and tactical awareness.

I think his decision to bat up the order is both prudent and necessary, for him and for the team. For most of his career at 5 and 6, MS had experienced players for support and backup. Now, with his finishing skills not at the same level as before and I say that studiedly because he has easily been one of the top three finishers in the history of the one-day game but his batting skills still very much formidable, it is imperative that India find a way to maximise both his ability and experience. At number four, MS can play the big shots with greater freedom because there are specialist batsmen behind him. At the same time, you are grooming a new finisher, trying out various options so that by the time the next World Cup comes around in 2019, you are not looking around for last-minute choices.

MS is perhaps the only one in the Indian team who can match, if not excel, Virat between the wickets. There is an excellent understanding between the two of them, and they both are innately aware of the frustration that constant rotation of strike can create in the opposition. Now that MS has decided to push himself up the order, this pair will bat together more often and feed off each other. I foresee breathtaking strokeplay and electrifying running in future.

Having said that, it is also essential for one of Virat or MS to bat through the innings till such time that the likes of Manish Pandey, Kedar Jadhav and Hardik Pandya stack up experience under their belt. I am sure MS must have been disappointed at not having got the job done in Delhi after having got himself in. That reflected in his intent, and perhaps his promotion, in Mohali. In the past, MS has seldom left the job unfinished. Virat is doing precisely that these days, not just taking the team to the brink of victory. To score 22 of 26 hundreds in a winning cause is a great record; to score 14 of those hundreds in chases speaks volumes of Virat s ability to plan and execute a chase, and his massive belief in his ability to up the rate of scoring effortlessly towards the end without seeking recourse to crudeness and unorthodoxy.

In many ways, Kane Williamson is the driving force of his team at number three. After a good first innings in the first Test in Kanpur, Williamson has hit a bit of a trough. The century in Delhi, a match-winning one at that, could not have been more timely. Williamson uses his feet extremely well, both in going forward or using the depth of his crease, and the way in which he uses the wrists to work quality spinners into gaps is quite sub-continental in style. Tom Latham has been remarkably consistent, but New Zealand are heavily reliant on their captain, particularly with Taylor not in form. Williamson will have to deliver in Ranchi and Visakhapatnam if New Zealand are to take something away from what has largely been a disappointing tour, for them.

That will not happen if India s bowlers have their way. Dhoni and the think-tank lead by Anil Kumble must be delighted at how well the bowling group has acquitted itself in the absence of several first-choice bowlers who have either been rested or are injured. Jasprit Bumrah has been brilliant; Amit Mishra has asked all the right questions; Pandya has become quicker and more consistent; Umesh Yadav has continued to impress; and Akshar Patel has been more than competent, even if he does not have the wickets to show. But the surprise package has been Kedar Jadhav, whose off-spin has got us the wickets of key batsmen in the middle overs. Both in Delhi and Mohali, New Zealand were very well placed after top-order heroics, but lost wickets, and way, in the middle overs. If they entertain visions of bouncing back and taking home the one-day trophy, they must arrest this trend. 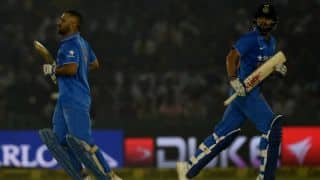