South Africa looked a relaxed side during the mid innings break but that wasn't for long as England batters took bowlers who only looked like Dale Steyn and Rabada to the cleaners.

More than 230 runs were scored and quite shockingly chased down comfortably to complete another run heist in the ICC World T20 2016 match played at Wankhede. Life came a full circle for England bowlers who were decimated by Chris Gayle storm a couple nights back were again taken to task by South African batters who got off to a rollicking start to leave England with a mountain of runs to chase.

South Africa looked a relaxed side during the mid innings break but that wasn’t for long as England batters took South African bowlers like Dale Steyn and Rabada for cleaners.

Faf Du Plessis was flabbergasted with what had happened and seemed to have no answer for the defeat. However, one man sat in the corner of the pavilion and had a good laugh.

Sudhir Naik the pitch curator who had come under the hammer for preparing a batting paradise during the final ODI match in the bilateral series between India and South Africa finally felt he had got the revenge for all the false accusations.
Sudhir Naik said, ”I was wrongly accused to be friendly towards South Africans. But that wasn’t true. Nobody believed me then. This match is a direct proof.

I caught South Africa in a honey trap by preparing another batting beauty but they didn’t know I had already informed English batters that the wicket will only get better with the game and that’s why Eoin Morgan chose to bowl first. South Africa on the other hand got complacent that they would easily win the game as wicket would deteriorate later on were taken by surprise. I challenge Ravi Shastri now to come and talk to me. It was the same strategy I had planned for that India vs South Africa match but Indian batters played reckless shots to try and impress their girl friends!”

Virat Kohli was seen swearing loudly as he read the news.

Faf Du Plessis on the other hand defended his loss by saying, ”It was a planned loss. We usually do pretty well during the early stages of the World Cup and choke during the knockouts so this time just to break the monotony, we lost the first game of the tournament!”

Meanwhile, Sudhir Naik has been offered a job by Highways Authority of India to prepare the perfect flat highways based on his experience of preparing flat decks at Wankhede. 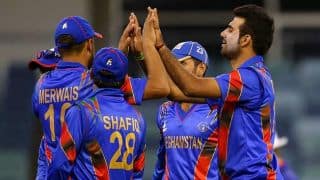