Warwick Armstrong, was a man who was an institution in himself, and, in the considered opinion of many contemporaries, was a vessel more noted for tonnage than tact, and one not above a little gunboat diplomacy at times.

Samuel Johnson, the author of the first authoritative lexicon of English, A Dictionary of the English Language, published in 1755, had once made a very pithy comment about how some petty people with no great aspirations in life try to make futile attempts to undermine the persona of the great. “A fly, Sir, may sting a stately horse and make him wince; but one is but an insect, and the other is still a horse.”

Well, Warwick Armstrong, ‘The Big Ship’, would have encountered several such attempts during his cricketing career, and would have ignored them as being unworthy of his comment or reaction. Here was a man who was an institution in himself, and, in the considered opinion of many contemporaries, ‘The Big Ship’ was “a vessel more noted for tonnage than tact, and one not above a little gunboat diplomacy at times.”

Warwick Windridge Armstrong (1879-1947), the great Australian cricketer, was born May 22, 1879 at Kyneton, Victoria, son of John Andrewartha Armstrong, an Anglican, a clerk and later solicitor, and his wife Amelia Mary, née Flynn, a devout Catholic, both of whom were Tasmanian by birth.

He was educated at Cumloden College, St Kilda, and University College, Armadale, making a name for himself in schoolboy cricket and quickly graduated to the South Melbourne and Melbourne clubs. He also played football for South Melbourne.

Cricket literature is full of wonderful stories about the deeds, and indeed, misdeeds, of the great man who was the first to subject the opposition to the ignominy of a 5-0 clean sweep in an Ashes contest on the celebrated 1921 England tour. Neville Cardus once described Armstrong as “Australian cricket incarnate”. Armstrong’s cricketing deeds are the stuff of legends, and too numerous to enumerate here.

This narrative speaks of one of the many wondrous feats of the great man.

Standing 6’3” tall and wearing Size 12 (13” x 7”) boots, the 133-kg colossus known as Warwick Armstrong was an imposing figure wherever he went. He lived up to his larger than life image in the game we are about to describe.

It was a Sheffield Shield match of 1920-21, the last of his illustrious career, and Armstrong was leading the Victoria team in a ‘home’ match against South Australia at MCG in November 1920, billed as a timeless match. Victoria won the toss and chose to bat first.

Victoria began their second innings with a lead of 64, and made very steady progress, the first wicket realising 64 runs. Surprisingly, the only man to be dismissed for a single-digit score was the stylish left-hander Vernon Ransford (8).

The fall of Ransford was the signal for the entry of skipper Armstrong. Ryder fell for 31 and Carl Willis for 25, at the team total of 7 for 375. The 8th wicket added 193 runs, when the skipper departed. Arthur Liddicut scored his maiden first class century (152, in 255 minutes, with 12 fours).

Warwick Armstrong scored 245 in the second innings in 320 minutes with 13 fours, becoming the first man to score a century and a double century in the same match in Sheffield Shield cricket history.

He also became the first man to score 400+ runs in a Sheffield Shield game, and only the second man after Archie MacLaren (424 for Lancashire against Somerset in 1895) to score 400 runs in a first class game.

When the last wicket fell in the Victoria second innings, a total of 724 runs had been scored in 168.7 eight-ball overs. The hapless South Australia captain Donald Steele had pressed 8 bowlers into service, Richardson picking up 4 for 153.

South Australia made a substantial 403 all out in the second innings, with centuries from Percy Rundell (116) and captain Steele (107 not out). McDonald picked up 6 for 127, and Liddicut took 3 for 42, as Victoria wrapped up the match, winning by a large margin of 385 runs.

Warwick Armstrong passed the milestone of 14,000 first class runs in this match, the 229th of the 269 matches he played in his first class career.

In 1934 Warwick Armstrong moved to Sydney and became General Manager in Australasia for James Buchanan & Co. Ltd, whisky distillers. On July 16, 1913 he was married to Aileen Veronica O’Donnell, daughter of a Gundagai grazier, and who passed away in 1940.

The great man died of pulmonary embolism complicating venous thrombosis at his Darling Point home on July 13, 1947, and was buried in the Catholic section of South Head Cemetery. Nearly all his estate, valued for probate at £105,813, was left to his only son Warwick Geoffrey. The museum at MCG holds his tent-like shirt, capacious trousers and enormous boots. 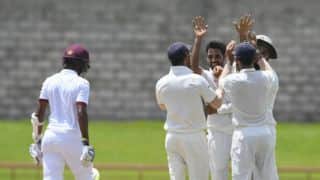