We have some of the quickest bowlers in Asia, says former Afghanistan player Raees Ahmadzai

We have some of the quickest bowlers in Asia, says former Afghanistan player Raees Ahmadzai

Raees Ahmadzai, the former Afghanistan captain has seen the team grow right since its nascent stages. Today, he is involved in coaching in Afghanistan and was also a selector at one point. Off the field, he has taken an important role as a UNICEF National Goodwill Ambassador in Afghanistan. Nishad Pai Vaidya spoke to Ahmadzai about his various roles and experiences. Raees Ahmadzai, the former Afghanistan captain has seen the team grow right since its nascent stages. Today, he is involved in coaching in Afghanistan and was also a selector at one point. Off the field, he has taken an important role as a UNICEF National Goodwill Ambassador in Afghanistan. Nishad Pai Vaidya spoke to Ahmadzai about his various roles and experiences.

Afghanistan’s rise to the highest level has been a fairytale. Coming from a country ravaged by violence and war, a group of men decided to pursue their dreams and came together to form a unit that brought happiness to their countrymen. From taking their initial steps in refugee camps to playing cricket against the best in the world, Afghanistan’s cricket team has come a long way and each member has a heartening story to tell.

Raees Ahmadzai has been a part of the Afghanistan setup since they embarked on their remarkable journey in 2003. Like his teammates, he first played cricket in a refugee camp in Pakistan. Over the years, he has seen Afghanistan progress step by step and was a key member of their side until the 2010 ICC World T20. He retired after that tournament to concentrate on grooming young talent and has continued his association with the game in his country. He is also the only Afghan to be appointed as a UNICEF National Goodwill Ambassador. In an exclusive chat with CricketCountry, he discusses Afghanistan’s early days in cricket, his role with the sport and with UNICEF, the future of Afghanistan cricket and other issues.

CricketCountry (CC): We have heard great stories of the Afghanistan players of following their dreams. Can you tell us your story and how you took up the game?

Raees Ahmadzai (RA): For me, cricket began in Pakistan when my family moved there during the Russian War. We were living in a refugee camp in Peshawar. I was in school when I heard that Pakistan had won the World Cup [in 1992] and all the students and teachers were talking about cricket. Gradually, we started playing cricket in our camp. We had no proper bats or balls and we used shoes and a wall as our stumps.

CC: While playing in the camps, did you and your teammates ever imagine that you would one day make a name for yourself so quickly?

RA: Well, I am not sure any of us felt that one day we would go on to play for Afghanistan. Our families opposed our decision of playing cricket actually. Lots of people were saying that we were wasting our time and some even likened us to ‘gangsters’. However, we continued and the boys in the camps used to play with the tennis ball.

CC: When Afghanistan started playing in 2003 against Pakistan’s domestic teams, what was the vision? What are your memories of that outing?

RA: Cricket started as such in 1995 (when the Afghanistan Cricket Board was formed) and the current players joined the team in 2002. We went to Pakistan in 2003, but one of the most memorable moments came when we crossed the Torkham border. I felt proud of myself as I looked at my passport.

CC: How crucial were the games against the Marylebone Cricket Club (MCC) and the tour of England in 2006? How much did that help Afghanistan cricket?

RA: I remember that game against the MCC in Mumbai in 2006. I was the captain for that match. Mohammad Nabi scored 116 and I contributed 52 off 13 balls. Mike Gatting, the former England captain was leading MCC that day and told me before the game that he would like to give us tips after the match. Once the match was over, he came and told me, “Your boys are great.” I lead the team on the England tour. We played seven matches there, out of which we won six.

Note: Afghanistan beat MCC by 171 runs. They scored 356 for seven in 40 overs and bowled MCC out for only 185. Gatting was dismissed for nought.

CC: You won your first tournament in 2007, which was the Asian Cricket Council (ACC) T20 Cup in 2007. How was that victory received and what belief did it give you?

RA: After the tour to the United Kingdom, we became very famous. However, the victory at the ACC T20 Cup in 2007 brought a lot of changes to our cricket. It was after that victory that we got to meet President Hamid Karzai. Not only that, but the Afghan people also gave us a very warm reception when we returned.

CC: The World Cricket League story was quick and rapid. You moved from Division Five to a victorious Division three quickly. What helped Afghanistan make such rapid progress? How did the fans respond to it?

RA: Really, as a cricketer I felt that we would win all the Division matches. What worked for us was that the team was focused and very hungry to do well. The fans were great and supported us a lot. They also prayed for our success. But, I can’t really explain how happy they were when we qualified for the 2010 ICC World T20 in the West Indies.

CC: The 2009 World Cup Qualifier was a big step for Afghanistan. Can you narrate that journey in South Africa and when you played your first One-Day International (ODI)?

RA: The South African journey was not all that good for us. That is because we won the matches against the good teams, but lost against the weaker ones. It was a big moment when all of us played our first ODI and were all delighted. Personally, I thought then, “I will be an ODI player now.” 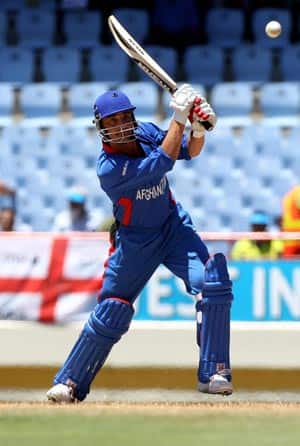 CC: When you went to the 2010 ICC World T20 in West Indies, what was the feeling in the team? Was there nervousness as you were playing India and South Africa?

RA: The World T20 was a very good experience for all of us. No one was nervous or anything and we were all ready to go out on the ground and play good cricket.

CC: You retired after that tournament and have taken up coaching. What are your recent coaching assignments?

RA: I announced my retirement after the World T20 as I felt it was the best time for me to go and help the youngsters. I started from nothing, but finished my cricketing career by playing against the likes of Mahendra Singh Dhoni and Graeme Smith. Currently, I am working as a national Afghanistan coach and I also served in the capacity of a chief selector for two years.

CC: What can we expect from Afghanistan cricket in the near future? Who are the players to watch out for?

RA: Afghanistan cricket’s future is very bright. I would pick our fast-bowlers as we have some of the quickest in Asia.

CC: Getting Associate status is another encouraging step. What is the Afghanistan team’s nearest goal now?

CC: You have also been appointed UNICEF National Goodwill Ambassador in Afghanistan. What is your role as an ambassador?

RA: I was filled with joy when I was appointed the UNICEF ambassador for Afghanistan — the first one for my country. This was possible only because of cricket. As an ambassador, I work a lot for polio eradication. I also work for girls’ education. The MCC and Afghan Connection also help my NGO Afghan Youth Cricket Support Organisation (AYCSO).

CC: What would be one thing you would like to tell the fans on behalf of the players?

RA: Respect your parents and don’t give a lot of time to cricket. Remember, education comes first and then sports. Be honest and respect your country.