In international cricket, on most occasions, each player is worth his weight in the squad and is a quality player who is expected to contribute to the success of his team. It doesn’t need a captain each time to lead the side to victory with his performance. There, may or may not be, better players than the captain in the side. The skipper is not necessarily the best player and the success of the team does not depend on his performance solely.

The above statement comes in the wake of the recent call for the axing of Darren Sammy as the skipper of the West Indies Test side following the thrashing they received during the series against India.

One has to realise that Sammy’s role in the side can come in for heavy criticism, for no one including Sammy himself knows how best he can be put to use in the Test scheme of things. His batting is just about good enough to add a handy 30-40 runs towards the latter part of the innings. He can’t even be relied upon to hang on and give support to a more established batsman higher up in the order. His bowling is mediocre and at best can be put to use to break an odd partnership every now and then. The fact that he is a good fielder, however, cannot be taken away from him. Yet, in all respect, West Indies cricket needs a leader like him at this point. They’ve needed one like Sammy every since their decline started in the early 1990s.

The Caribbean team has never been short of talent; not before the 1970s and neither after it. Even today, they can pull in a good XI sans Sammy, to provide a team strong enough to beat most sides in world cricket. Yet, a perennial problem that they have faced throughout the years is the fact that not many apart from Clive Lloyd could ensure that the individual talents are brought together and their combined potential is harnessed to its optimum best to get the desired result. Overall, his captaincy made West Indies look a much stronger squad than they actually were. It is hard to assess the role of Lloyd’s captaincy in their dominance. What Viv Richards did was simply to follow on the lines of Lloyd.

Today, after all these years, Sammy brings back that hope of making the West Indian team bring their individual talents for a greater cause of playing as one unit. It is not to say that Sammy has performed anywhere close to what Lloyd did as a player. Nor is he a shrewd strategist and a psychoanalyst that England’s Mike Brearley was as a skipper. Yet, the fact that he is a respected and a loved player in the dressing player and can create a good team environment makes him an ideal leader for a team like the West Indies.

What Brearley did as a captain was he understood man-management. Even the fact that he was the weakest player in the XI could be overlooked, because he could bring out the best in the other 10 players in the side to get the desired result for his team. Sammy comes in that mould. Maybe his value as a player in the side cannot be justified, but his role can and should be valued; not just for the present side, but also for a revival of cricket in the Caribbean.

These are fine figures if one was to consider the records of his 10 immediate predecessors.

The above stats are not to justify Sammy’s role as the skipper, but simply to highlight that ever since he has taken over the team, the fortunes of West Indies cricket have changed for the better.

Sammy has gone on to become the glue for the players from West Indian islands to stick together. Much like India, where different cultures and identities come together to play for one unit, it needs a central figure of respect and love to bind the players from different identities of the Caribbean islands when they play for one unit — the West Indies. And in all likelihood, Darren Sammy is that man! 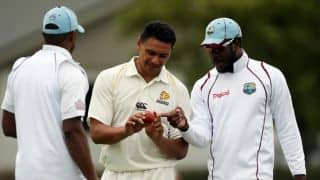