Drawing the second Test has helped West Indies get the monkey off their back and inspired them to put up an even better show in the coming Tests.

As for the West Indian fans, all they hoped for was a good and even contest between the two teams. For the same reason, they chose to stick to the Test side even as the razzmatazz of Caribbean Premier League (CPL) went on simultaneously in the region. But as the result of the first Test came out, they were disappointed to say the least, as their side capitulated to the superior Indian team. The margin of the loss (innings and 92 runs) was not just enough to dent the side’s morale, but also fans’ hopes of a better show in the coming games.

The second Test, a rain-marred affair, was no different for first four days. After scoring a paltry 196 in the first innings and conceding 500 runs, West Indies were placed at 4 for 48 at the end of Day 4; this, after some assistance from the rains. The Caribbean side was staring at yet another shameful defeat with Indian bowlers on top of their game. A defeat before lunch on Day 5 was already prophesied by the Pundits and fans alike. But as they say, cricket is full of uncertainties and it is not wise to comment on the outcome till the last ball has been bowled. ALSO READ: India vs West Indies: Fans vow to boycott Test at St Lucia following Darren Sammy’s sacking

Against all odds, the West Indian middle-order showed some spine on the final day. Jermaine Blackwood, who had scored run-a-ball 62 in the first innings, took charge and played yet another counter-attacking knock of 54-ball 63. His flawless striking not just left the Indian bowlers taken aback, but also instilled the much–needed confidence in young West Indian batsmen, who till that point looked clueless. Roston Chase — who was playing just the second Test of his career — along with Shane Dowrich — playing his fourth game — then went on to add 144 runs for the sixth wicket and further frustrate the Indian bowlers.

Chase brought in his maiden Test ton and remained unconquered on 137 as West Indies managed to draw the second Test. Dowrich fell for 74, but was replaced by skipper Jason Holder, who too proved to be a valuable ally to the centurion. Holder played a captain’s knock and stayed unbeaten on 64, thus playing his part in his side’s revival of fortunes. Though the Test ended in a draw, it was effectively a win for the West Indies, as it gave the young side immense self-confidence and a major boost ahead of the remaining two Tests.

This young West Indian team had been carrying the weight of the rich legacy and unfair comparisons with the teams from the past. Besides, there has been an added pressure to perform better than the T20 mercenaries, who have been playing endless T20 cricket and not representing West Indies for varied reasons. Drawing the second Test has helped them get the monkey off their back and inspired them to put up an even better show in the coming Tests. The side has the ability; there is simply no doubt about it. With the experience of Marlon Samuels and Darren Bravo, combined with the new-found self-belief and the positive energy brought in by the youngsters, the West Indian team is capable of giving India a tough competition in the third Test beginning Tuesday, August 9. India needs to stay cautious, for the hosts still have enough gas in the tank to challenge them. 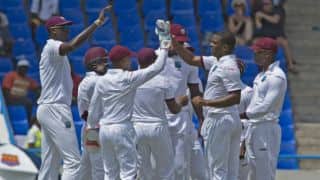 5 West Indies players to watch out vs India