West Indies take on India in a four-Test series beginning from July 21 at Antigua.

West Indies had a golden chance to bounce back in Tests after their last two overseas outings against Sri Lanka and Australia. They lost the series against a Sri Lanka side that is still coping to survive after the retirements of two of their legends and followed it up with a crushing series loss against Australia Down Under. A new-look West Indies then travelled to India and won the T20 World Cup 2016; the 50-over side then did remarkably well in the tri-nation series at home, featuring Australia and South Africa. West Indies piped a formidable South African side to make it to the final, only to lose to Australia after putting up a good fight. Full Cricket Scorecard: India vs West Indies 2016, 1st Test at Antigua

Unfortunately, the squad they have announced against India does not give the impression that they mean business. Of all the talents they could have picked, they have gone in with Rajendra Chandrika (3 ducks in 6 Test innings including a pair on debut), who does not have the numbers to warrant him a place in the Test side. Yes, he scored a gritty fifty in the warm-up match. By the same logic, Shai Hope outscored everyone and registered an unbeaten ton. Why does he not make the cut? He certainly has a better First-Class record than Chandrika. READ: West Indies announce 12-man squad for Test series against India

Marlon Samuels, meanwhile, has done very little to justify his place in the side (his success has mostly come in the shorter formats), but given his vast experience, the selectors may persist with him for a while longer. He has not crossed 20 in his last 9 innings, and his last fifty came 11 months back against Australia. Leon Johnson, who led the WICB President’s XI against India, got the nod after a decent show for Guyana in the domestic circuit. Jermaine Blackwood has had a mixed 15-Test career, but the selectors see him as one for the future.

However, few can argue with the selection of Roston Chase. He has scored 710 runs this season for Barbados at 59.16 and has also chipped in with 23 wickets at 17.26 with his useful off-spinners. This brings us to west Indies’ bowling department.

Neither Jerome Taylor nor Kemar Roach make it to the side. According to the press release, Taylor had announced retirement just before the squad was announced. If that is true, there was little that could have been done, but his decision is a bit baffling, for his 29 wickets in 2015 had come at 29.89 impressive numbers for a team that rarely win.

With Taylor’s forced retirement, West Indies are left with an inexperienced fast bowling unit. While Taylor has played 46 Tests, Jason Holder, Shannon Gabriel and Carlos Brathwaite the three fast bowlers for the series have played just 31 games between them.

Denesh Ramdin’s axe may have been a surprise, but his latest statements in the media gives the impression that he has averages well over 45 in Tests. Just to be clear, he has never averaged anywhere close to it in his career! Dropping him gives a golden opportunity to Shane Dowrich to prove his worth in the side.

Jomel Warrican should consider himself significantly unlucky not to be picked. He was perhaps one of the bright prospects from the Sri Lanka and Australia series; like he showed against India in the warm-up match, he is handy with bat down the order too.

West Indies have gone for depth in their batting, with the likes of Holder and Carlos Brathwaite batting low down the order. This is probably a defensive strategy, not going for 20 Indian wickets but playing for long draws, keeping Indian bowlers at bay. West Indies will need the lower middle-order to bat extremely well, considering that they have the likes of Chandrika batting above them!

West Indies will have their task cut out to win the series if they go in with the same team in all four Tests. Only positive is that the new Chairman of Selectors could have done much worse. One can only hope that West Indies can take some positives from this series. 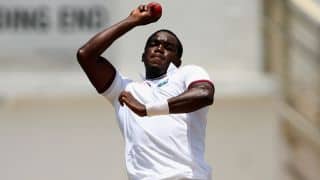