Henry Marshal took the long walk back to the pavilion before something dawned upon him.

In a match that began on January 15, 1926 at Buenos Aires, Argentina upset Plum Warner s MCC. However, as Abhishek Mukherjee elaborates, there was a rather unusual appeal by Henry Marshal.

We have discussed Argentina s shock win over a touring MCC in 1926-27 on these pages. Argentine cricket dates back to 1806-07; Buenos Aires Cricket Club was founded in 1864; and the Primera Divisi n, started in 1897-98, is still contested annually.

But for now we shall concentrate on the match they won. Plum Warner s MCC toured South America in 1926-27, where they played a match against each of Uruguay, Chile, and Peru, and 7 against Argentina. It was a not-too-weak MCC side, including four Test players: Warner (albeit in his fifties), Gubby Allen (this is not the time to research on whether he was Warner s illegitimate son), Rory Stanyforth, and Farmer White.

Let me first run through the match. Henry Marshal and John Knox added 31 for the opening stand before Argentina were reduced to 78 for 7. They recovered to 134. MCC were routed for 89, chiefly by the left-arm seam bowling of Herbert Dorning, who bowled unchanged for figures of 22.2-7-38-7. Earlier, Dorning had scored 26 from No. 9 an enormous innings given the low-scoring match.

This Ayling belonged to the famous Ayling cricket clan of Argentina. While this is not the best place to discuss this, one can make a passing mention of the fact that ED Ayling played for Buenos Aires CC. His sons Dennet, Cyril, Cecil, and Eric all represented Argentina, as did Cecil s son AE and Dennet s son, also called Dennet.

But let us come to the incident, which involves Marshal. Gerald Brodribb mentions the match but not the innings, preventing us from putting a date to the match. Marshal scored 16 and 7, not too bad in the context of the match.

White was bowling his left-arm spin. Marshal went on the back-foot to play, trod on to the stumps, and walked back. He almost made it to the pavilion when something dawned upon him: no one in the fielding side had appealed, and the umpire had not actually given him out. In other words, he had actually walked.

Marshal was more aware of the laws than most cricketers, especially Law 46 (1884 Code, 1924 Revision): They [the umpires] shall not order a batsman out unless appealed to by the other side. An appeal, How s that, covers all ways of being out (within the jurisdiction of the umpire being appealed to), unless a specified way of getting out is stated by the person asking.

Now Marshal had not yet left the field of play, which technically meant that his innings was not over. So he decided to take a chance. He returned to the crease, almost certainly startling the incoming (but not arrived yet) batsman.

So now he appealed to the umpire at the bowler s end (one of John Garrod and Henry Roberts). The man in white coat had, in all probability, never encountered such a situation. However, he confessed that he had not been unsighted; he then referred to his colleague at square-leg.

The square-leg umpire announced that Marshal had broken his stumps after completing his shot. The Law 25 stated: [The striker is out hit wicket] if in playing at the ball he hit down his wicket with his bat or any part of his person or dress.

He had no option but to rule Marshal not out (who had not, I repeat, left the ground). Marshal resumed batting. 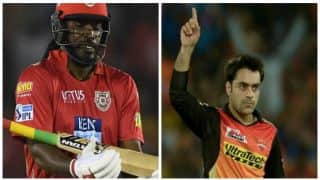