There have been numerous threats to get a tour called off, but this was probably the most sinister.

A most unusual report appeared in The Times on May 11, 1970, narrating a sinister plot hatched by a British biology student. Abhishek Mukherjee elaborates on perhaps the most extreme measure ever conceived to prevent a cricket tour from taking place.

There had been outrage after the squad for England s 1968-69 tour of South Africa was announced. MCC had buckled under political pressure and had left out the coloured Basil D Oliveira immediately after he had scored 158 in the historic Oval Test.

It was not only about the fans. The issue was raised to the Parliament. Tom Graveney refused to be a part of the tour. MCC received a letter, warning them that the aircraft carrying the England cricketers to South Africa would be blown up. And The News of the World announced that they would send D Oliveira to cover the tour.

And then Tom Cartwright of Warwickshire pulled out of the tour due to a shoulder injury. MCC finally included D Oliveira. Unfortunately, South African Prime Minister BJ Vorster, notorious for his affinity towards apartheid, refused to accept an English squad with a coloured man in it. The tour had to be cancelled.

The South Africans of the late 1960s were a fabulous side. They thrashed Australia 4-0 in the first half of 1970. A tour of England, including 5 Tests and 23 other matches, was announced. However, the outrage towards South Africa continued, and in February, the tour was reduced to 5 Tests and 7 tour matches.

In the end, that tour had to be called off as well, and rightly so. South Africa would not play international cricket again till 1991. The tour was replaced by an extremely strong World XI side, but that is another story.

We will deal with a part of the nationwide protest, a most sinister plot hatched by 20-year-old David Wilton-Godberford, to prevent the South African tour. Wilton-Godberford, a student of biology at London University, had decided to use unleash plagues of locusts on the grounds: if there was no grass, how could there be cricket?

It was no casual plan. By the time he talked to The Times, Wilton-Godberford had already bred 50,000 locusts, mostly desert and African migratory, at his Colwyn Bay residence. The insects, up to 1.5 inches long, were kept in glass-fronted cages, and were kept warm by electric bulbs. He also stored many, many more eggs: the target was a hundred thousand.

How would it work? Anything up to 100,000 locusts will be let loose at a particular ground and I think the plan is foolproof. They will ravage every blade of grass and green foliage. The greatest care will be taken to ensure they are in the correct physiological stage. So that their appetites will not be impaired they will not be fed for 24 hours before the moment of truth.

It takes 70,000 hoppers [locusts] 12 minutes to consume one cwt. [about 51 kg] of grass. The crack of a solid army of locusts feeding on the grass will sound like flames. The South Africans are going to dread this trip; they will see more locusts than they have ever done back home

Wilton-Godberford had thought out the entire thing. At the time of the onslaught the insects would not have grown wings; and the weather would kill them within a month, before their wings would develop.

Cricket has seen its share of insect invasions. Swarms of bees have stopped even Test matches; flying ants, grasshoppers, and leatherjackets (not leather jackets) have caused hold-ups; and flies often disrupt batsmen s concentration in Australia (Kevin Pietersen even swallowed one at Melbourne).

The tour was called off eleven days after the news appeared on The Times. The scheduled tour opener match was only a fortnight away.

The threat perhaps has one parallel. In 1998-99 Shiv Sena announced they would unleash poisonous snakes in the stands during the Delhi Test against Pakistan. BCCI responded by posting twenty of the best snake charmers in the city outside the ground. Anil Kumble lent the Test his name by taking 10 for 74 in the second innings, but that is another story. 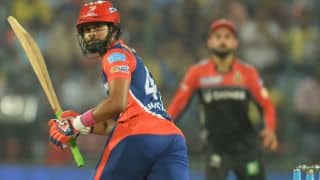