Something rather strange happened when India were playing Australia in the 2nd final of the Commonwealth Bank Series 2008.

It was the second of best-of-three finals of the Commonwealth Bank Series in 2008. India, one of the two visitors, Sri Lanka being the other, under a new ODI captain had managed to reach the stage where they had to beat Australia to win the series in what would then become history. The first final was won by India by 7 wickets, thanks to Sachin Tendulkar‘s splendid and almost perfectly-paced innings, along with Rohit Sharma’s valuable half-century. The second one then promised more drama, more thrill and almost a certain surety that Australia will come back fighting. What the Gabba was about to witness that day, would consist of a record-breaking away series win, a close finish and that of a shoulder tackle, almost similar to a coathanger in Rugby.

MS Dhoni, decided to bat first after winning the toss. India set a target of 259 runs, again with almost yet another hundred for the Little Master. After a heated battle in the Test Series loomed with controversies and fierce face-offs, it was all down to Australia who didn’t just have level the series and take it to the third final in Adelaide, they had to do that against a fresh-new yet revitalised-looking India, which was set to write a new story in the format. What added to the pressure was the fact that Adam Gilchrist, one of Australia’s greatest left-handers had announced the series as his last in international cricket. If Australia could not chase India’s total, Gilchrist would end up on the losing side in his last match.

Well begun is half done. It was not how things went though for Australia. Praveen Kumar‘s remarkable spell of swing bowling in his first two overs had done severe damage to Australia’s hopes of going about easy in the run chase. Gilchrist was back in the pavilion, in what would be his last match. Ricky Ponting‘s dismissal though meant India were now on top. Ponting’s failure to pull — a shot that he mastered in — a short-ball and get hold of it, landed the ball straight to Yuvraj Singh at mid-on. The Indians were excited or as Michael Slater put it while he was doing commentary, “Look at the Indians, they’re all over the Aussies.”

Michael Clarke was then done in by a ball that was bowled in short and hit the off stump. Clarke perhaps, anticipated it to bounce more. It did not. Kumar had his third. He was on a roll. At 34-3, Australia were struggling. Then what happened is not only worth a narration, it is also what this piece is about.

As Shanthakumaran Sreesanth was steaming into his run-up, he was stopped by a pause in proceedings. A streaker had entered the ground, running naked onto the pitch with security guards behind him. His name was Robert Ogilvie as it would later be revealed. He had ran onto the pitch heading towards the big man — Andrew Symonds — who had just arrived at the crease. What happened next was arguably one of the rarest incidents of its type, of all time.

The tall, strong, beast-of-a-guy that Symonds is, bumped his bulldozer-like shoulder into the streaker and he landed flat on his back right there. It was almost like a Brock Lesnar or a Phil Heath would push open a door with their deltoids. He then stood at the runner’s end unamused by what happened as a few Indian players giggled before things got back to normal. ALSO READ: Andrew Symonds: Controversy’s favourite child

The great commentator Richie Benaud pretty much summed up the incident, “Well that streaker could have done some injury to Andrew Symonds because he seemed to run straight at him, and all of a sudden, he was on his back.”

Symonds, along with Matthew Hayden who was looking dangerous throughout his innings then put on a partnership to bring the Australian innings on track until, Hayden was run-out in the 26th over. Symonds, after his unusual act on the pitch and getting wrapped on the pads to Harbhajan Singh, was back to the pavilion in the same over. India were inching closer. They had sent half of the Australian side back.

It was then up to Mike Hussey and James Hopes to take Australia forward. And they were doing it in some fashion. But just when Australia were looking to make a comeback into it, Sreesanth produced a breakthrough in the form of Hussey. Hopes had everything falling on to his shoulders. He notched up his first fifty in ODIs and the equation still looked in Australia’s reach.

While wickets kept tumbling at the other end, Hopes did find a few boundaries and sixes. After 99 overs bowled on the day, Australia needed 13 off 6 balls with 2 wickets in hand. Irfan Pathan had the ball in hand. Hopes got away from the strike on the first ball, rather mistakenly. A full slower delivery made Bracken hit one in the air and Piyush Chawla juggled it to take the catch on his second attempt. India now needed just one wicket. Since the bastmen crossed while the ball was in the air, Hopes was back on strike.

Now 12 were needed off 4 with one wicket in hand. Pathan ran-in to bowl a good yorker delivery, but Hopes somehow managed 2 from long-off. The fourth ball of the over was again bowled full. Hopes charged forward to make it a low full toss but the ball went into the hands of Chawla who took it comfortably. “Hopes on his knees”, and “Bhajji goes for a spin” were Ravi Shastri’s words in commentary. India had won their first tri-series in Australia and Australia, were stunned. India didn’t need the third final to take the trophy home. 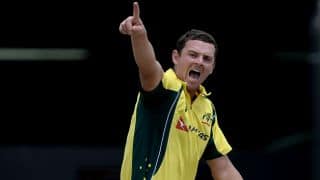